Power, violence, belief, memory, love, sex, killing… The visitors of the exhibition “Jenny Holzer: Thing Indescribable” until September the 9th at the Guggenheim Museum Bilbao will experience the evolving scope of the artist’s practice, which addresses the fundamental themes of human existence. Her art speaks to a broad and ever-changing public through unflinching, concise, and incisive language. Jenny Holzer’s aim is to engage the viewer by creating evocative spaces that invite a reaction, a thought, or the taking of a stand, leaving the sometimes anonymous artist in the background. The artist’s aim is to engage the public by creating evocative spaces that ask viewers to consider and potentially define their positions on contentious issues including the global refugee crisis, violence against women, and systemic abuses of power.

Sponsored by the Fundación BBVA, the exhibition is a survey of work by one of the most outstanding artists of our time and features new works, including a series of light projections on the occasion of the opening on the facade of the museum, each night from March 21 to March 30.

Curator Petra Joos designs a show that offers us a new perspective on the present making Bilbao an essential stop in the 2019 cultural calendar. Holzer’s work has been part of the museum’s fabric since its beginnings, in the form of the imposing Installation for Bilbao (1997). Installed in the atrium, the work—commissioned for the museum’s opening—is made up of nine luminous columns, each more than 12 meters high. Since last year, this site-specific work has been complemented by Arno Pair (2010), a set of engraved stone benches gifted to the museum by the artist.

The reflections, ideas, arguments, and sorrows that Holzer has articulated over a career of more than 40 years will be presented in a variety of distinct installations, each with an evocative social dimension. Her medium—whether emblazoned on a T-shirt, a plaque, a painting, or an LED sign—is language. Distributing text in public space is an integral aspect of her work, starting in the 1970s with posters covertly pasted throughout New York City and continuing in her more recent light projections onto landscape and architecture. Holzer’s work merges concepts and words in an output that questions not only the reality but also the messages we receive on this reality in which we live.

The exhibition at the Guggenheim Museum Bilbao pays tribute to Holzer’s career, from her start in the mid-1970s, when her art sprang up on the streets of New York—surprising pedestrians with her Truisms written between 1977 and 1979, nearly three hundred aphorisms and slogans that utilize a series of modern clichés or commonly held truths. “With a sign or a poster in the street you have the space of time it takes a person to walk a few feet. With Truisms” stated Holtzer “I offer what will work in seconds, or in slightly longer blocks of time for people who are willing and able to concentrate… You must remember that viewers are volunteers… There are sentences that are complete messages, that you can absorb in an instant, but, if someone wants to stay longer, there’s an entire series in which these three-second lines are embedded that gets more complicated.” With this series, Holzer invites the reader to consider the necessity of social change, propaganda’s potential to manipulate the public, and the conditions that attend revolution. 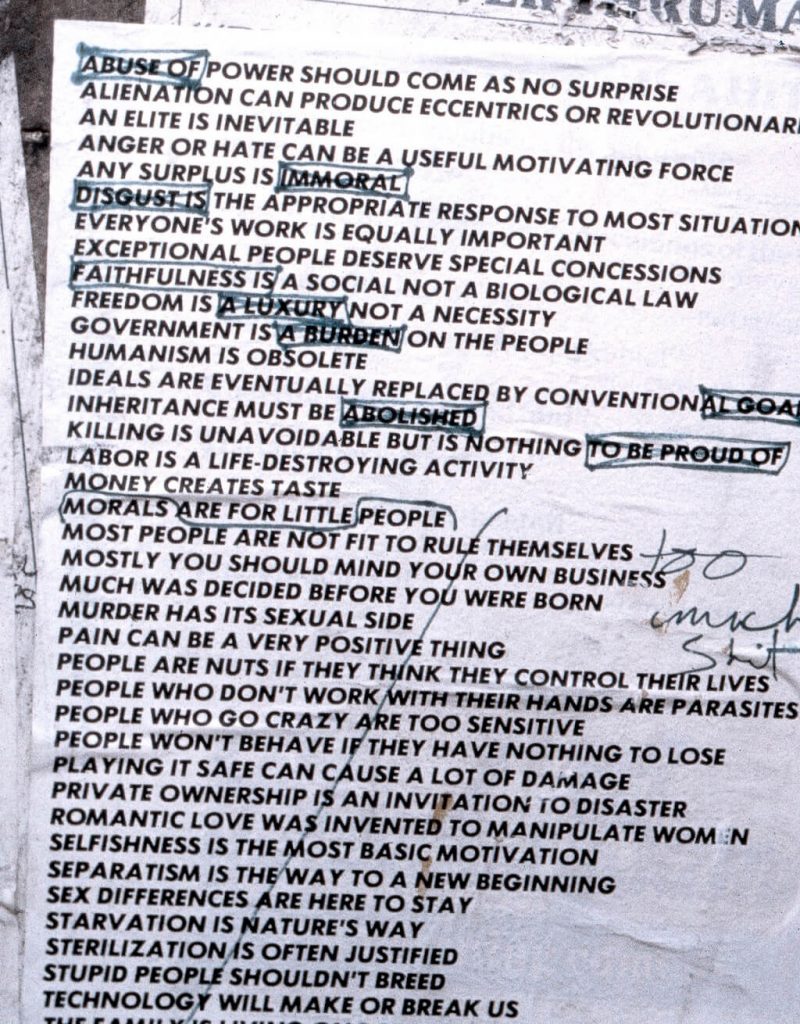 Her works oftentimes take on the form of installations in dialogue with the specific sites housing them. Of her work in stone, for example, Holzer says: “I wanted people to be comfortable, and to take time to look. So I thought to provide benches, and it came to me that I could put writing on the seating, and the benches should be stone. When words are carved in stone, they can be touched, they can be read with the hand; they might be perceived differently than when on the page. Marble and granite lock time while electronic signs and projections signal differently. Rows of benches might have people imagine waiting rooms, courtrooms, hospitals, and churches, for better and worse.” 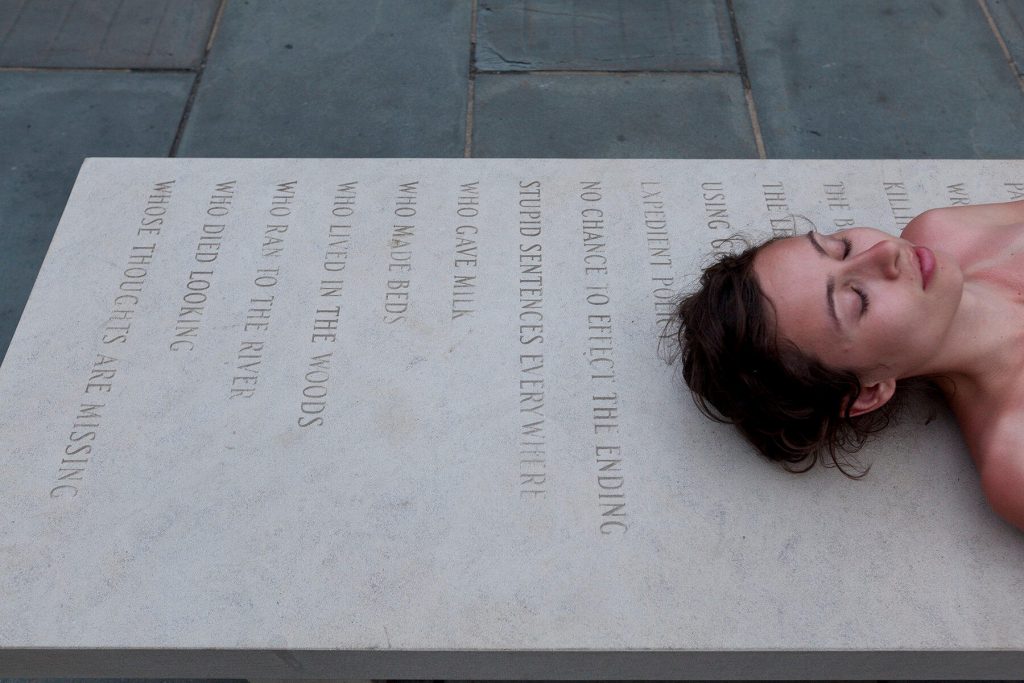 Ram (2016), an LED sign measuring over seven meters long, represents one of Holzer’s most recent explorations into the relationship between physical structure and language. Words scroll along each face of the horizontal sign at varying speeds, periodically flashing, blacking out, and breaking into a rainbow spectrum that casts a toxic glow on the surrounding floor. The differing speeds evoke speech patterns, which Holzer describes as “the kinetic equivalent to inflexion in the voice.” With the aid of robotics, Ram moves back and forth and rotates from side to side, suggesting the motion of military battering rams or sex. 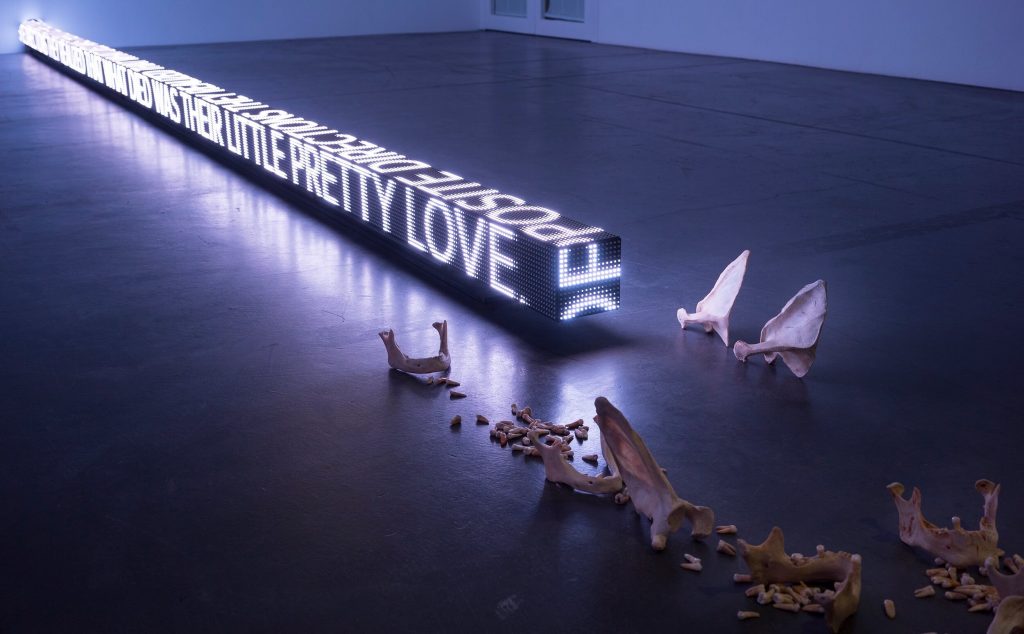 I WOKE UP NAKED – a new robotized LED installation displaying first-person testimonies from survivors of sexual assault and rape – extends toward Purple (2008), a 19-element array of curved LED signs reminiscent of human ribs, which is set in motion for the first time in this exhibition. Purple displays another of Holzer’s texts, Lustmord (1993–95), in English and Spanish. Prompted by the instrumentalized use of rape as a weapon of war in the former Yugoslavia, Lustmord takes its title from a German word that denotes a murder committed for sexual pleasure. Written from the perspectives of perpetrators, victims, and observers of violent sexual encounters or their aftermath, the texts in this series record sexual violence in its many manifestations. 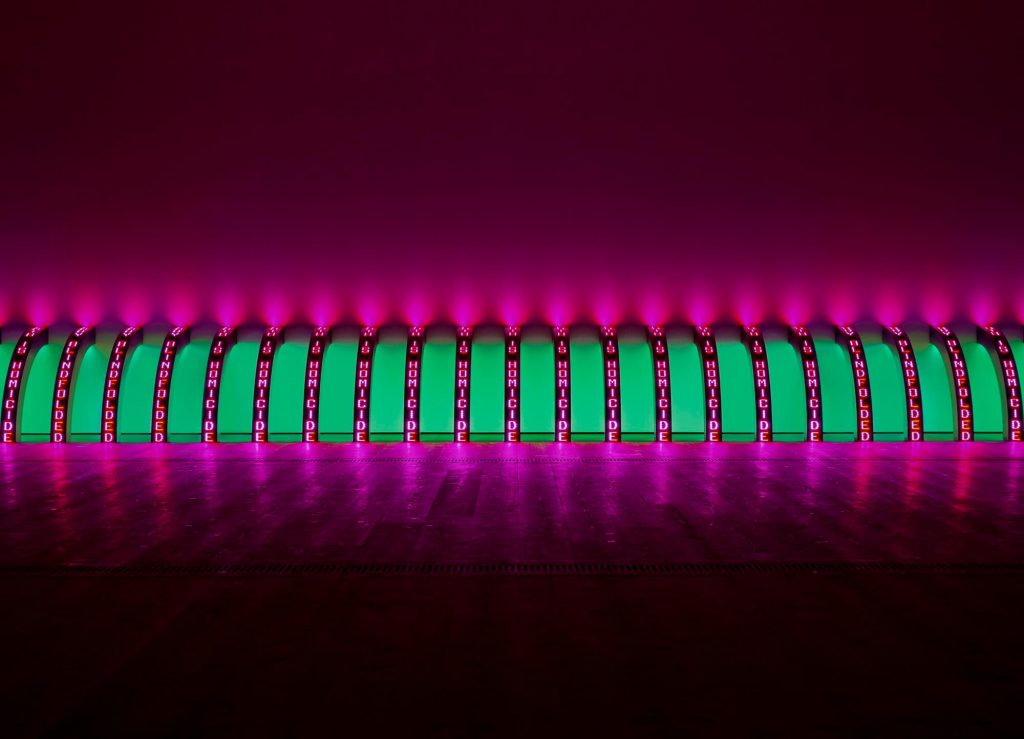 Four decades of her career, in which art, poetry, politics, and recent history converge in extraordinary, intellectually profound works boasting an exceptional artistic dimension. This extensive period which the show covers reflects her position as one of the most influential and recognized artists worldwide, who has earned numerous distinctions and awards, such as the Golden Lion at the 1990 Venice Biennale. 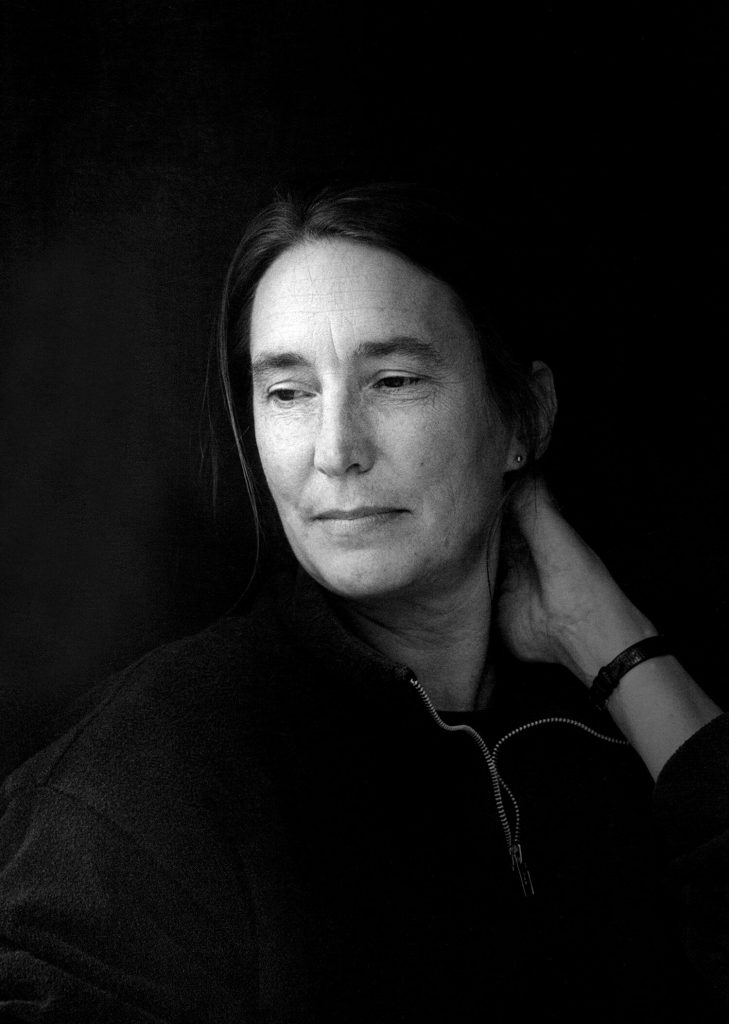