Originally conceived for a beauty salon in Milan, Bocca® lip-shaped couch is the perfect abstraction of sensuality and of the irreverent pop spirit of 1970s design. Studio 65 conceived Bocca® in 1970 at the request of the owner of a chain of beauty salons in Milan: the type of place in which the piece would be positioned made the research focus on beauty and sensuality. The 1960s were a period of big change for the female image and for the affirmation of a “pop” aesthetic, thanks also to the widespread diffusion of mass media and its virtuous intertwining with the art and creativity of the time. 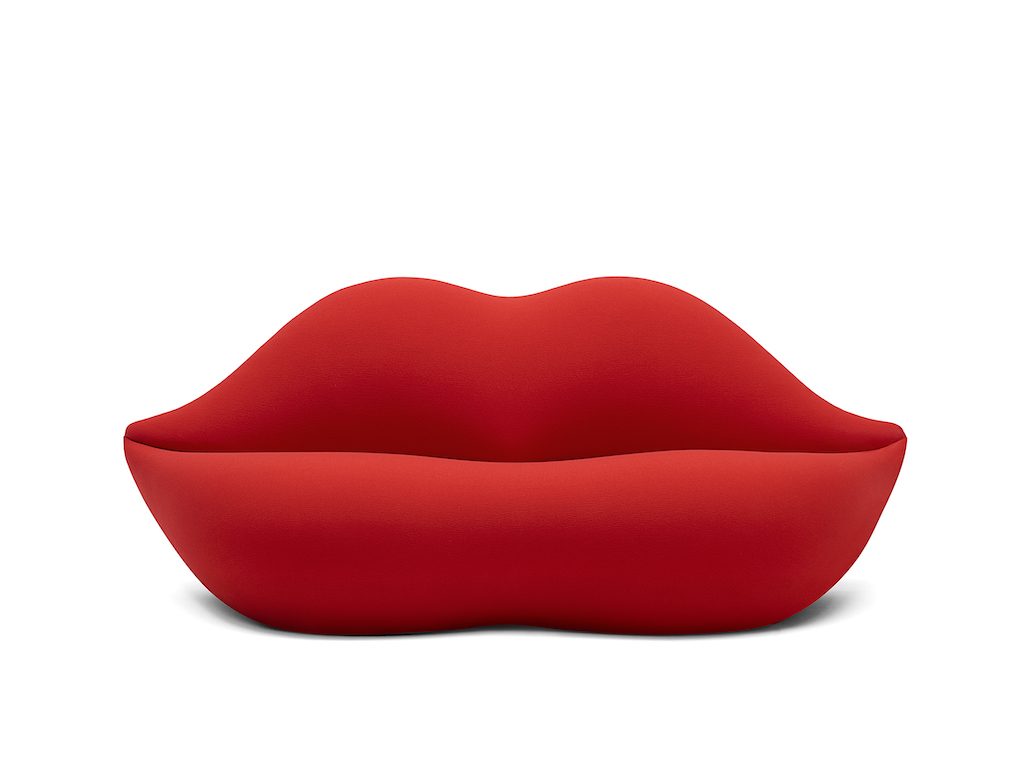 The disruptive and subversive look of this couch was immediately noticed by the media and by insiders to the extent that the prestigious American Life magazine was the first to showcase it. It was thus that Bocca® also took on the name of Lips® Sofa, the nickname with which it is known in English-speaking countries.

After 50 years, Bocca® is the symbol of that radical research which Gufram -Italian design brand which has always distinguished itself for its radical and revolutionary approach, beginning with its founding 1966- carries on even today. It still maintains its irreverent and ironic spirit, its glamorous and timeless aesthetic, and affirms itself as one of the most internationally famous and celebrated design pieces through exhibitions, permanent collections in museums, magazine covers, and interior design projects.

Since 1970, the Bocca® couch has only been available from Gufram. Innovative and disruptive, not only in aesthetics but also in technique, Bocca® is made of polyurethane, the Gufram material par excellence. The classic version, with its typical red cover, is available in a limited edition of 1,000 pieces and is still being produced using the original mould. 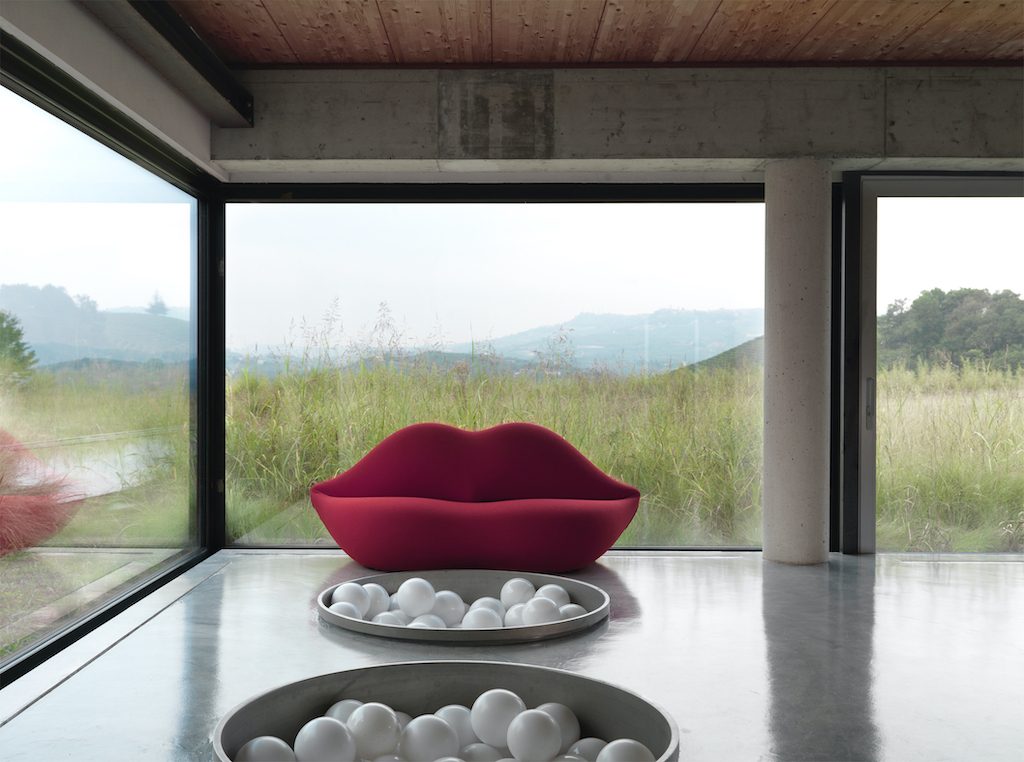 On the occasion of its 50th anniversary, thanks to the Unlimited edition, Bocca® multiplies its allure becoming open edition, maintaining its radical spirit unchanged. Today, 25 colours merge with its sinuous lines to give life to a new season in which the most vivid colours coexist with neutral ones. From the warmest colours like red and orange, through green and various shades of blue, to the more neutral colours like grey and beige, Bocca® Unlimited plays with a vibrant spectrum of tones maintaining its seductive soul, its radical spirit, and its overwhelming vital energy, even a half-century after its creation. 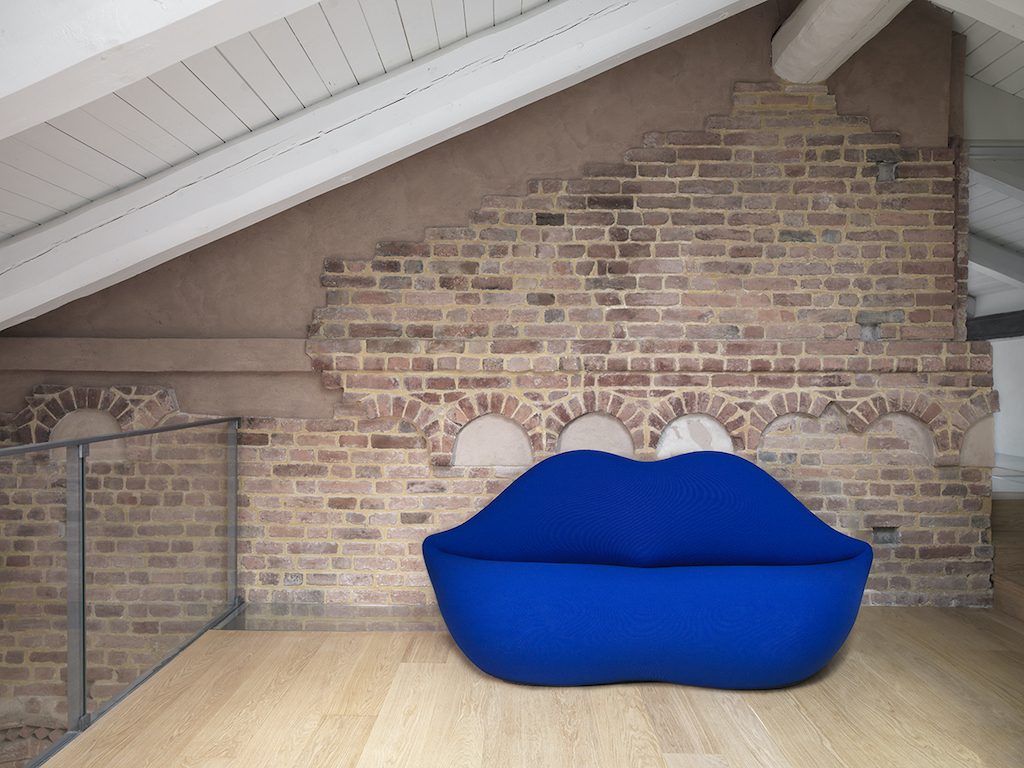 However, over the years, its disruptive image has inspired various versions able to meet the aesthetic needs of collectors while at the same time adapting to the evolving social context.

For this reason, two new limited editions of 500 pieces each were born in 2008: Pink Lady, offered with a new glamorous and stylish fuchsia covering, and Dark Lady, all black with an oversized piercing, a transgressive interpretation with a pronounced goth inclination.

In 2015, to celebrate Studio65’s first 50 years in business, Gufram premiered a special limited edition of only 50 models of the couch with a gold fabric covering at GAM in Turin on the occasion of the Il mercante di nuvole (The Cloud Merchant) exhibit. Maintaining its iconic shape inspired by the fire red lips of the Hollywood stars, this new edition embellishes, even more, an object which has entered the most beautiful homes and most important museums in the world.

In 2017 a new collaboration contributed to the contamination of Bocca® with the creative flair of Moschino, the visionary and maverick fashion brand. Zipped Lips! Is a limited edition of 99 pieces reinterpreted by Jeremy Scott, creative director of the fashion house, in the context of the capsule collection Moschino Kisses Gufram. A gold zipper keeps the lips of the fire red fabric-covered sensual couch closed, giving it a fetish pop touch.

Precisely for its disruptive and nonconformist aesthetic, the Bocca® couch has been selected by artists, architects, designers, and creatives to give a radical touch to some of their most important projects around the world. 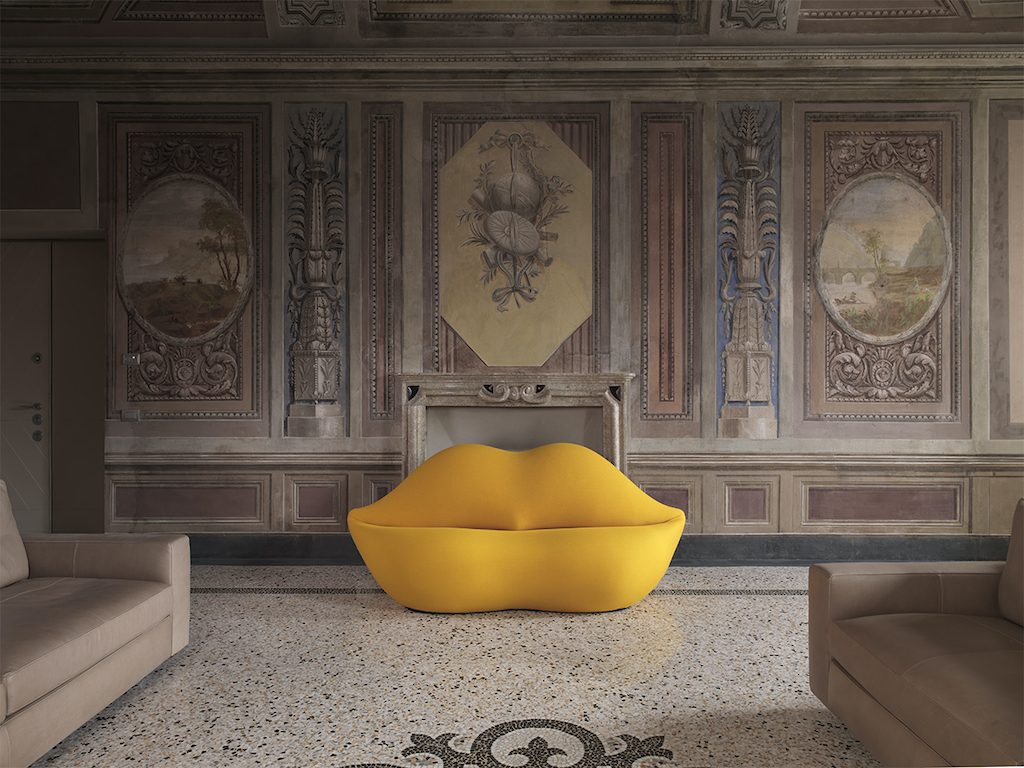 In the lobby of the Sanderson Hotel in London, designed by Philippe Stark, Bocca® welcomes guests with its sensual elegance. In the Byblos Art Hotel Villa Amistà in Verona, architect Alessandro Mendini wanted its sinuous shapes to lend a touch which is outside of the norm. Fashion designer Martin Margiela, called to furnish the interiors of the Les Sources de Caudalie resort, chose Bocca® to underscore his minimal project with delicate tones. 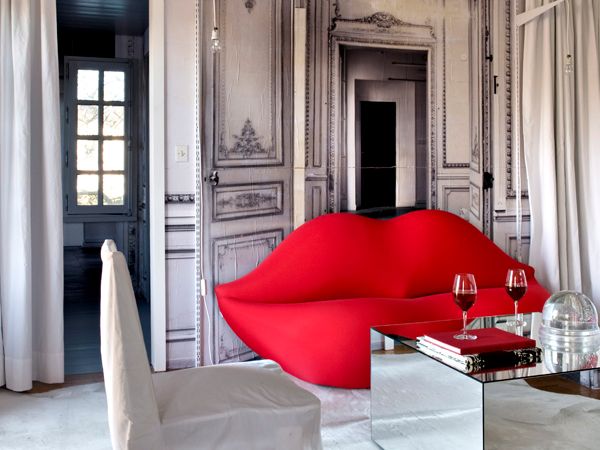 In addition to being a domestic sculpture with an unbeatable surprise effect, this couch with its unusual shape asserts itself as a striking piece to be used in interior design projects dedicated to public spaces. All of its components, in fact, comply with the directives on the furnishing of common spaces. For this reason, even the selection of fabrics – elastic for the classic Bocca® and natural wool with a vibrating effect for Bocca® Unlimited – confirms itself as an added value piece for all designers who dedicate themselves to contract.

The glamorous charm of the Bocca® couch has made it the perfect accessory for photoshoots and the protagonist of set design throughout the world. From the first photos in the ’70s with model and actress Marisa Berenson to the ad shots of a famous cosmetics house featuring Heidi Klum to the world tours of artists such as Beyonce and Katy Perry, the Bocca® couch has expressed its iconic and evocative power to the utmost, not only in the world of design but also in that of fashion and entertainment. Bocca® has been the protagonist of editorials for some of the most important magazines in the world such as Vogue, Harper’s Bazaar and Elle, portrayed together with actresses of the calibre of Anne Hathaway and Alicia Silverstone. Like a true artist, it has participated in memorable shows at the Crazy Horse in Paris and in cultural events such as the Opéra Pompidou performance of Francesco Vezzoli in the Paris museum of the same name. 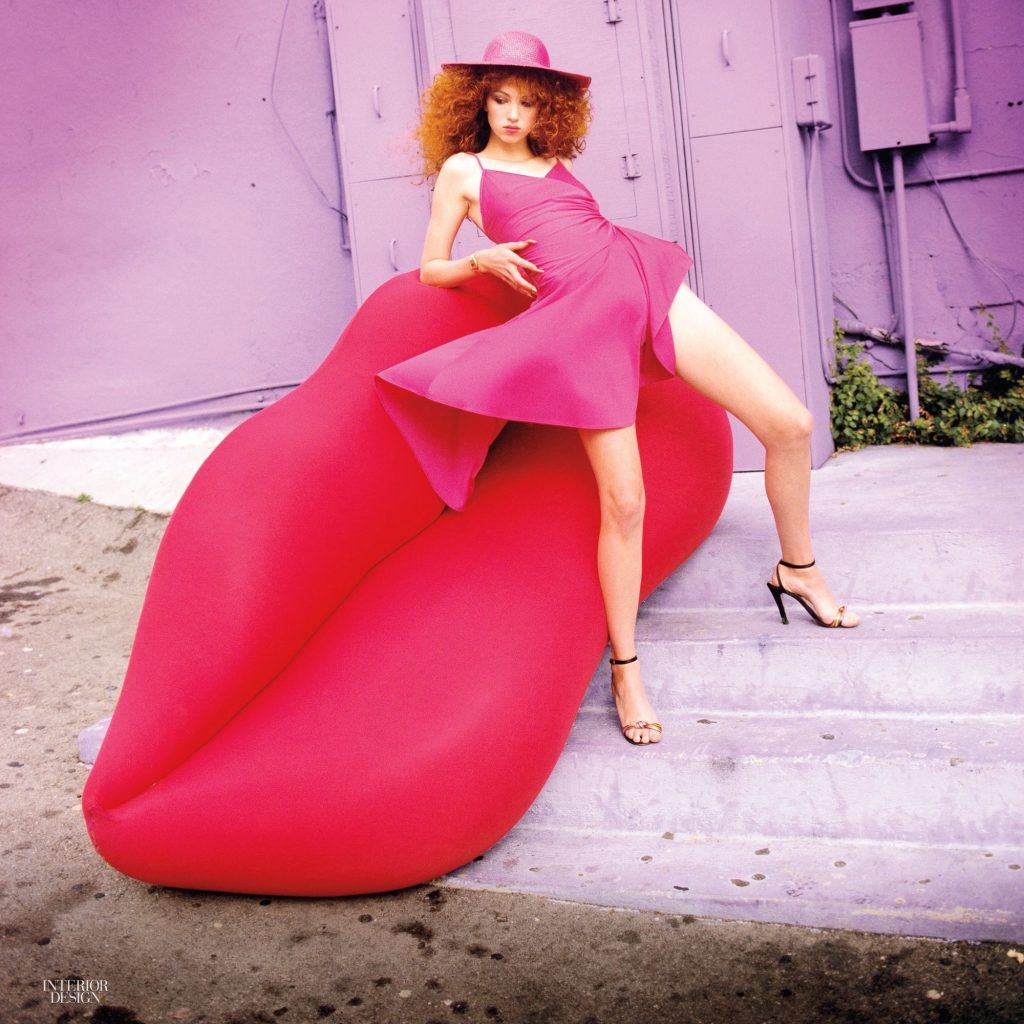 Portrayed by the lens of famous photographers such Richard Avedon and David LaChapelle, Rankin, Bocca® is still a diva, the archetype of sensuality which, a half-century after its creation, maintains its overwhelming vital energy unchanged.

THE RADICAL HISTORY OF GUFRAM

At a historic moment in which design, like all artistic expressions, was seeking to break from bourgeois conformity, Gufram affirmed itself as a point of reference for a substantial group of international artists and creatives eager to experiment with shapes. The ability of the brand to work with polyurethane – an innovative material which was developed right during that period – transformed it into a real creative workshop, a place where everything was possible. Radical Design derives, on the one hand, from the need to deconstruct and reconstruct the home setting and its elements, bringing the revolution of use and of the shape of furnishings to the extreme; on the other hand, it wants to integrate the values of Surrealism – the European artistic movement still active in the 1960s – into the production and industrial process – along with that of Pop Art, which had just arrived from the United States. It was precisely from Pop Art that the need to integrate the creative gesture with mass production, and artistic inspiration with the consumption of objects, arose: Gufram was among the first companies to sense the change and became the spokesman for it. Many of the projects from the 1960s and 1970s have become icons of that movement which Gufram continues to support today through the enhancement of its historic pieces and the production of new projects together with contemporary designers who are the torchbearers of those radical values.