Until October 8, 2018 the Costume Institute’s spring exhibition, Heavenly Bodies: Fashion and the Catholic Imagination is on view at The Met Fifth Avenue – in the Byzantine and medieval galleries, Mary and Michael Jaharis Galleries for Byzantine Art, part of The Robert Lehman Wing, and the Anna Wintour Costume Center – and uptown at The Met Cloisters alongside medieval art from The Met collection. 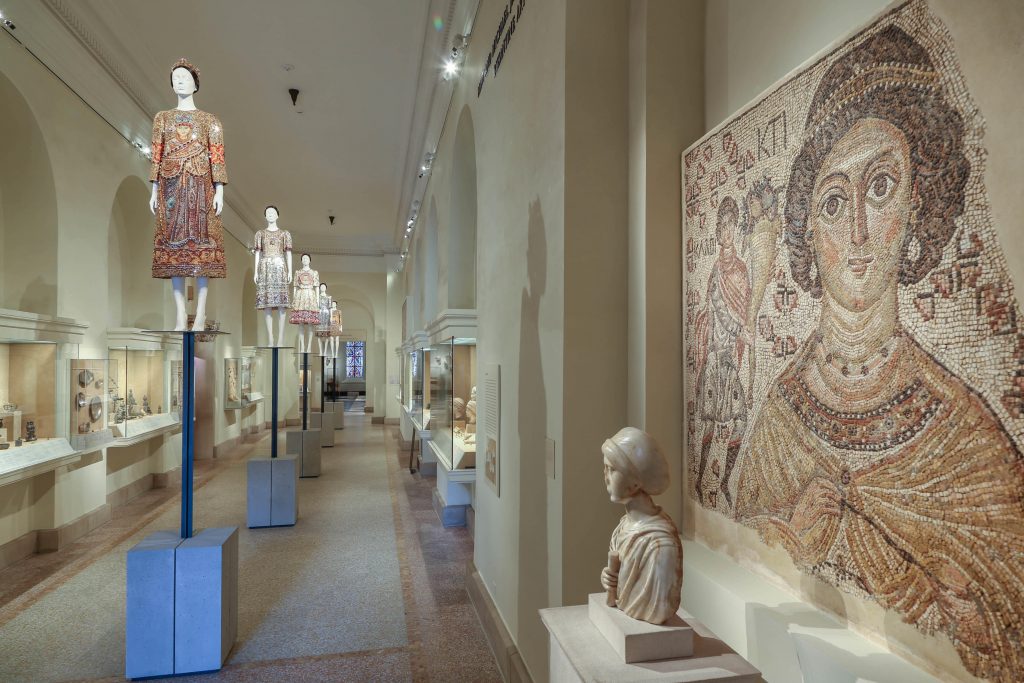 The interdisciplinary architecture and design firm Diller Scofidio + Renfro (DS+R) created the exhibition design with The Met’s Design Department. Providing an interpretative context for fashion’s engagement with Catholicism are more than 150 ensembles, primarily womenswear, from the early 20th century to the present. The presentation situates these designs within the broader context of religious artistic production to analyze their connection to the historiography of material Christianity and their contribution to the construction of the Catholic imagination. The installation plays on the preeminence of light within Catholic space. Natural light is one of the most moving dimensions of medieval churches. It imparts a sense of time and a deep exteriority. Within the exhibition, the marching rhythm of the garments is periodically punctuated with projections of ‘supernatural daylight’. As if by providence, key works are revealed within window-shaped frames of cool crisp light. Isolated from their neighbours, they are brought into a direct relationship with their architectural environment and the sky implied beyond. As an interruption of the codes of museum experience, this creates an effective bridge to another, perhaps more spiritual, world. 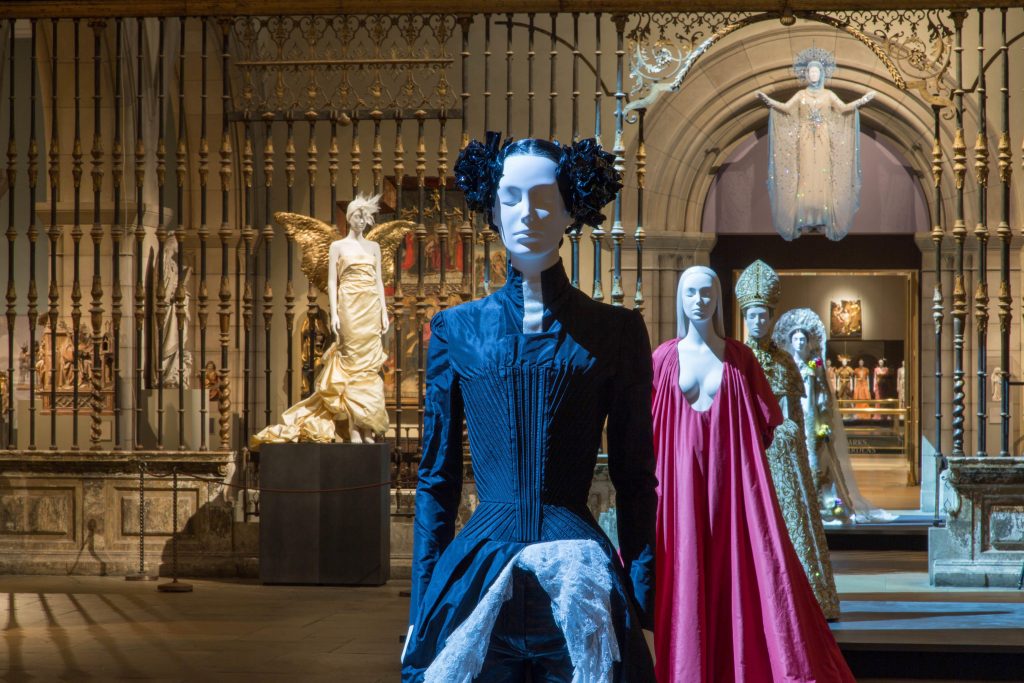 “The Catholic imagination is rooted in and sustained by artistic practice, and fashion’s embrace of sacred images, objects, and customs continues the ever-evolving relationship between art and religion,” said Daniel H. Weiss, President and CEO of The Met. “The Museum’s collection of Byzantine and western medieval art, in combination with the architecture and galleries that house these collections at The Met, provide the perfect context for these remarkable fashions.”

The thematic exhibition – that is made possible by Christine and Stephen A. Schwarzman, and Versace – features a dialogue between fashion and masterworks of medieval art in The Met collection to examine fashion’s ongoing engagement with the devotional practices and traditions of Catholicism. A group of papal robes and accessories from the Vatican serves as the cornerstone of the exhibition, highlighting the enduring influence of liturgical vestments on designers. The exhibition features approximately 40 ecclesiastical masterworks from the Sistine Chapel sacristy, many of which have never been seen outside the Vatican. 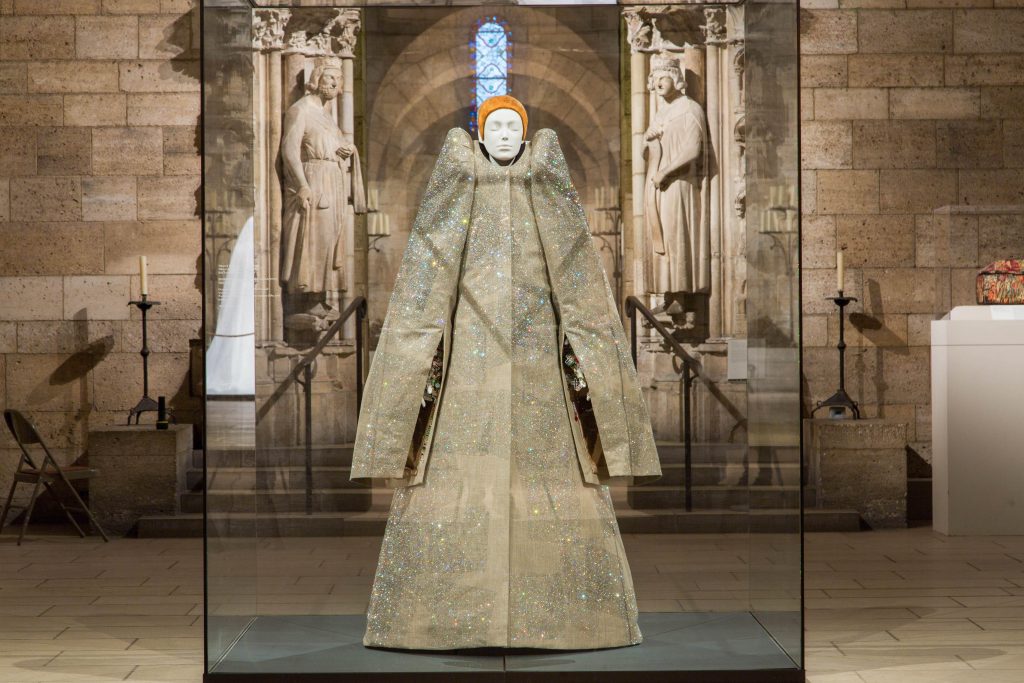 “Fashion and religion have long been intertwined, mutually inspiring and informing one another,” said Andrew Bolton, Wendy Yu Curator in Charge of The Costume Institute. “Although this relationship has been complex and sometimes contested, it has produced some of the most inventive and innovative creations in the history of fashion.”

The exhibition design strikes a balance between an experience which feels elevated and one which allows for the requisite level of criticality within a broader material culture. On the one hand, religion is sacred and inviolate, but on the other, it has always engaged with art and design. The tension this exhibition explores is how that relationship, and the values it expresses, change over time. In line with the philosophy of the New York studio that conceived it. Focusing on cultural and civic projects, the work of DS + R, in fact, addresses the evolving role of institutions and, consequently, the future of cities. 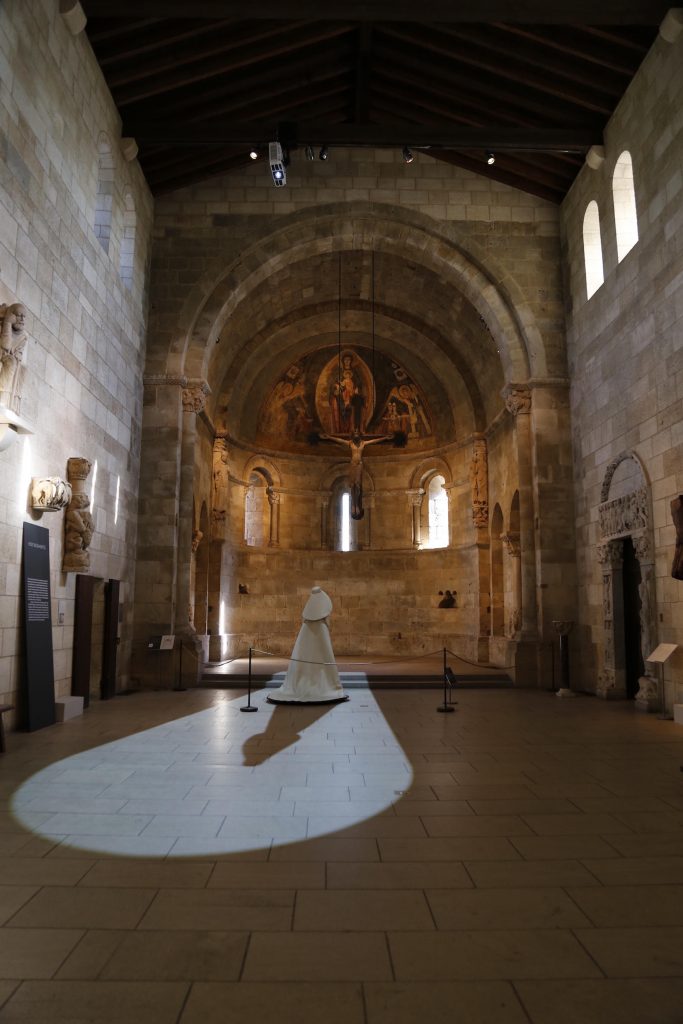 Founded in 1981, Diller Scofidio + Renfro (DS+R) is a design studio whose practice spans the fields of architecture, urban design, installation art, multi-media performance, digital media, and print. The studio is based in New York and is comprised of over 100 architects, designers, artists and researchers, led by four partners—Elizabeth Diller, Ricardo Scofidio, Charles Renfro and Benjamin Gilmartin.

Images: © The Metropolitan Museum of Art