Fuoripista, a new way of interpreting a fitness accessory 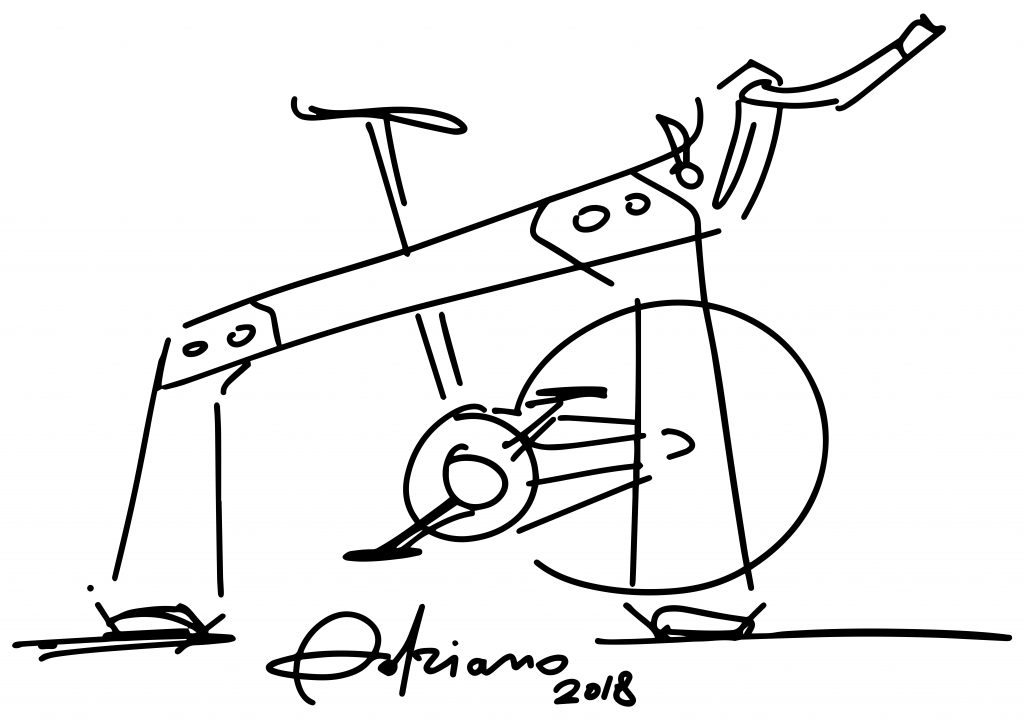 “Design everything and always take up the challenge: every single thing can be forever redesigned in a different and better way”. This is what Davide and Gabriele Adriano brothers tell about their ability to break rules and “re-shuffling” cards progressing towards a never-ending evolution. 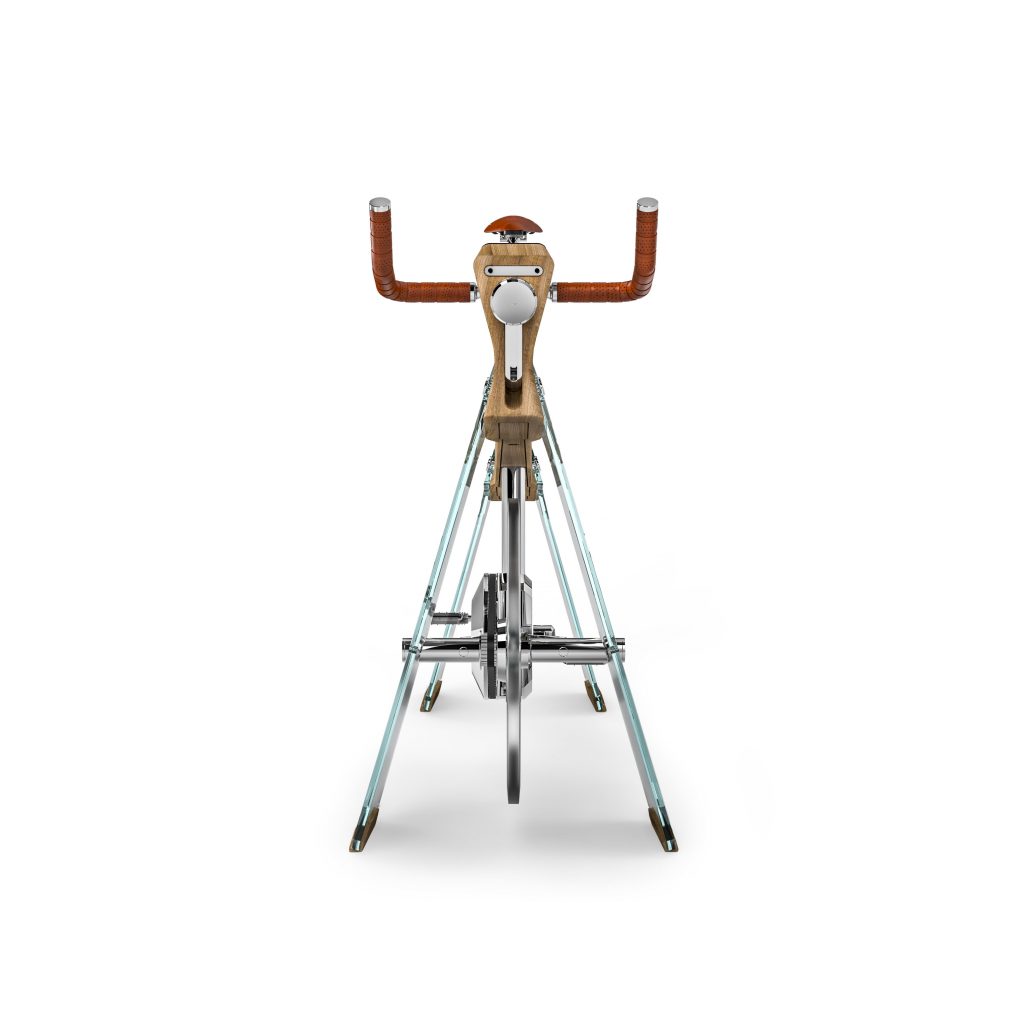 After reinventing the foosball with Teckell, the pool table with Filotto and ping pong table with Lungolinea of Impatia, has brought its vision for the exercise bike for homes with Fuoripista produced by Elite. Fuoripista is an exercise bike for indoor training, in crystal, wood and steel for a performance without compromise, to put on display in every place, best in the main hall or the office. 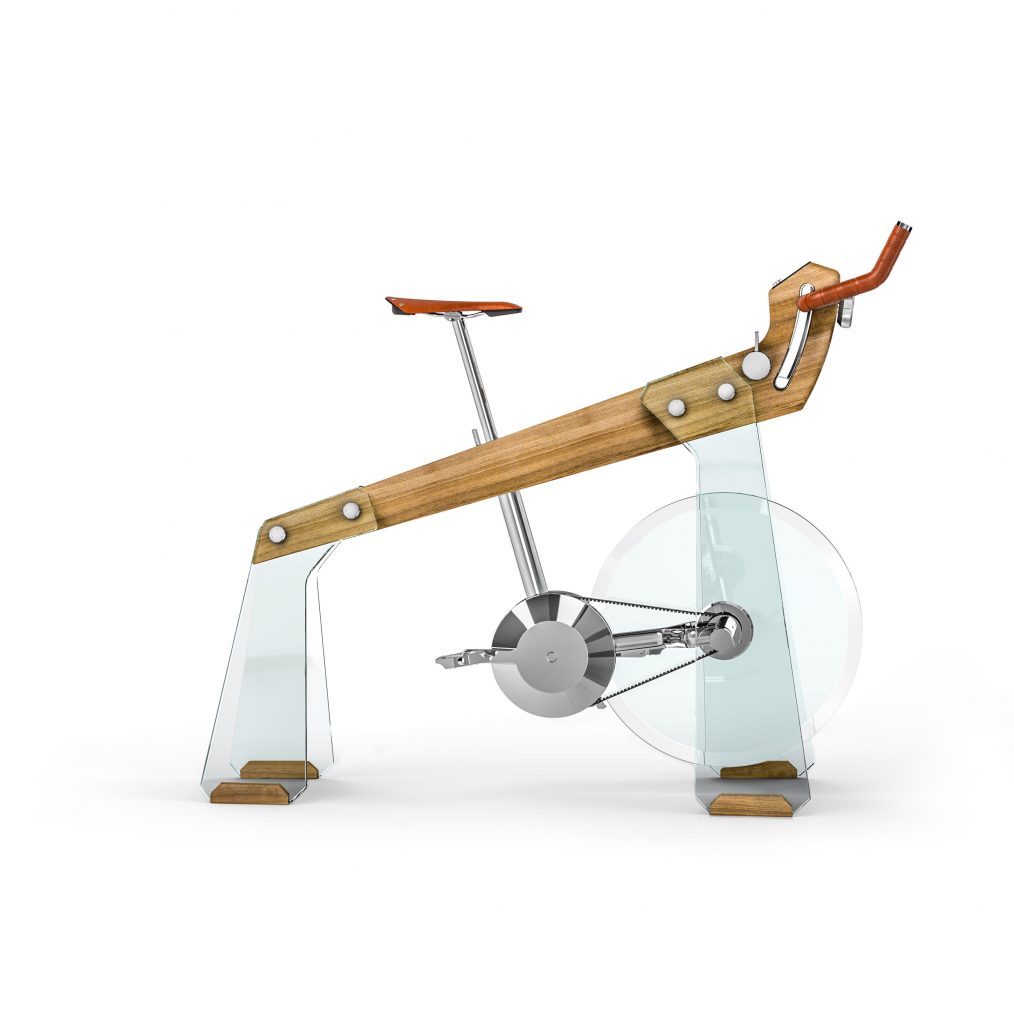 Fuoripista designed by Adriano Design took part to collection nominated “SaloneSatellite 20 anni” – a collection of pieces designed specifically for the occasion by international designers in a special edition to celebrate the 20 years of the SaloneSatellite.

Fuoripista represents a new way of interpreting a fitness accessory, no longer gym exclusive but so beautiful that becomes an object of desire, to show off, to praise, one you would ride with pride and joy. A dream machine along with you would ride away some of the most spectacular cycling routes in the world, virtualised on a tablet mounted on its front. It allows to enjoy a (riding) passion in full and without a compromise, with extremely performant technologies which you won’t have to hide under the bed, in the closet nor the basement, on the contrary, it gives a pleasure in every place it is displayed. 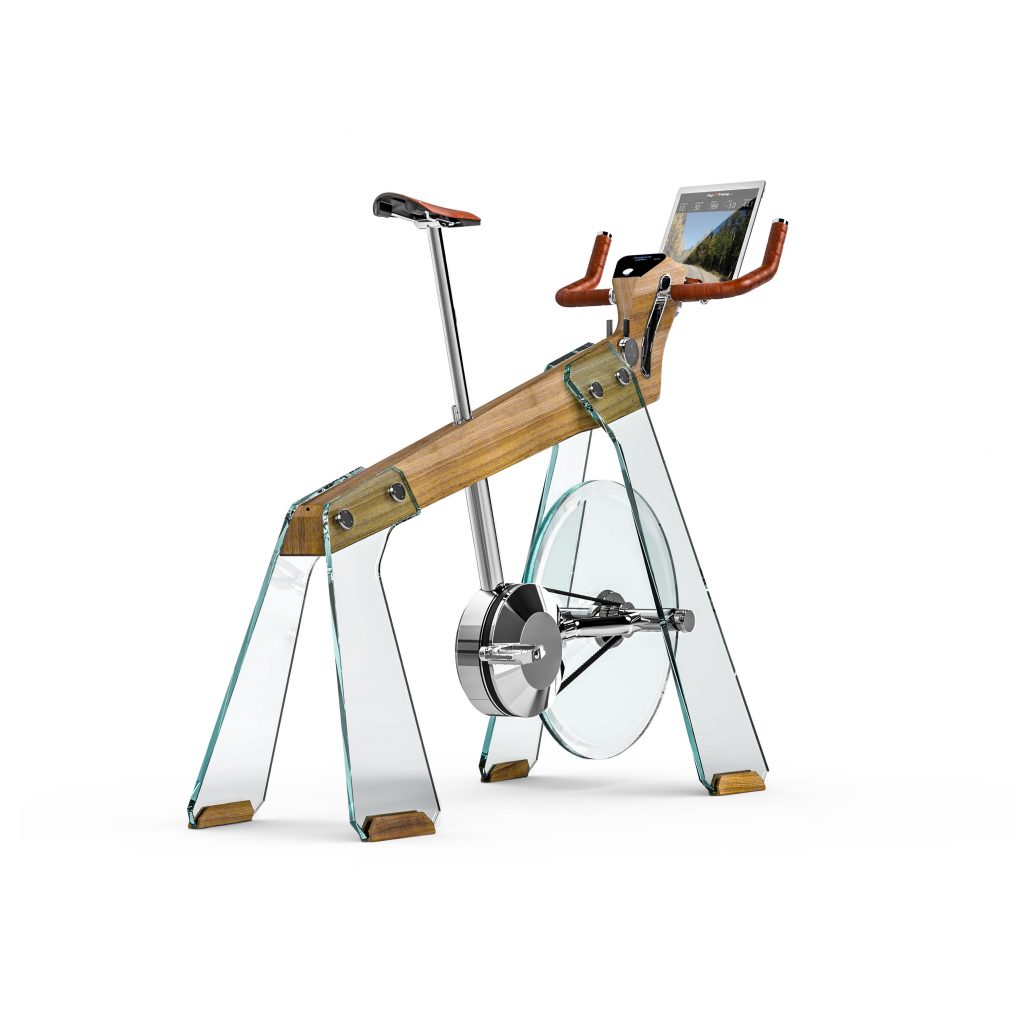 Adriano Design studio was established in 1997 and has worked in collaboration with prominent companies at home and worldwide such as Foppapedretti, Scavolini, Olivetti, OGTM, Centro Ricerche FIAT, Bemis and Melitta. Graduated in Architecture and active as professors at the Turin Politecnico and Guest Professors at some prestigious Universities, both national and international, Davide and Gabriele Adriano have been awarded a number of acknowledgements among which the prestigious Compasso d’Oro ADI (the Golden Compass of ADI), IF Product Design Award, 2011 and 2013 Design Plus award, Designpreis Deutschland, the Good Design Award, the International Design Competition in Osaka, the Koizumi Award. Further to that, they have been given the honourable mention at the XXI and XXIII Compasso d’Oro ADI. 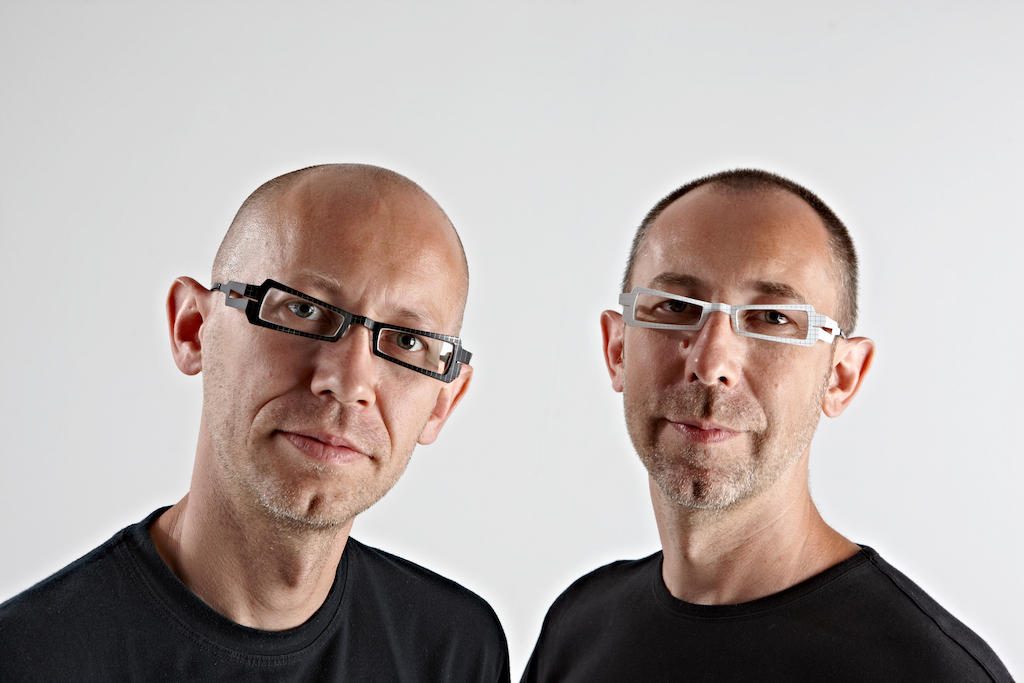 Davide and Gabriele’s “Manifesto” is a reflection on contemporary, ethical, responsible and sustainable design was inked in this period. This is how the ever critics of the current models of auto-production and self- produced goods, a model that converts designer into an entrepreneur, set out to lay the foundation of Coprodotto, a new and revolutionary economic model which re-defines the relation between the artisan and designer. 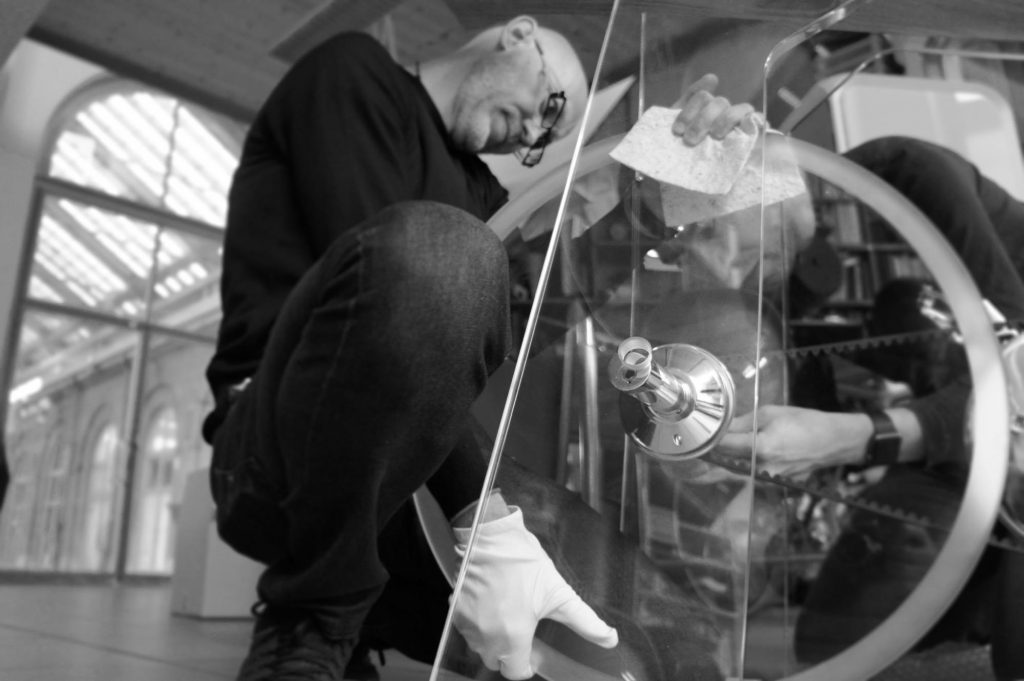 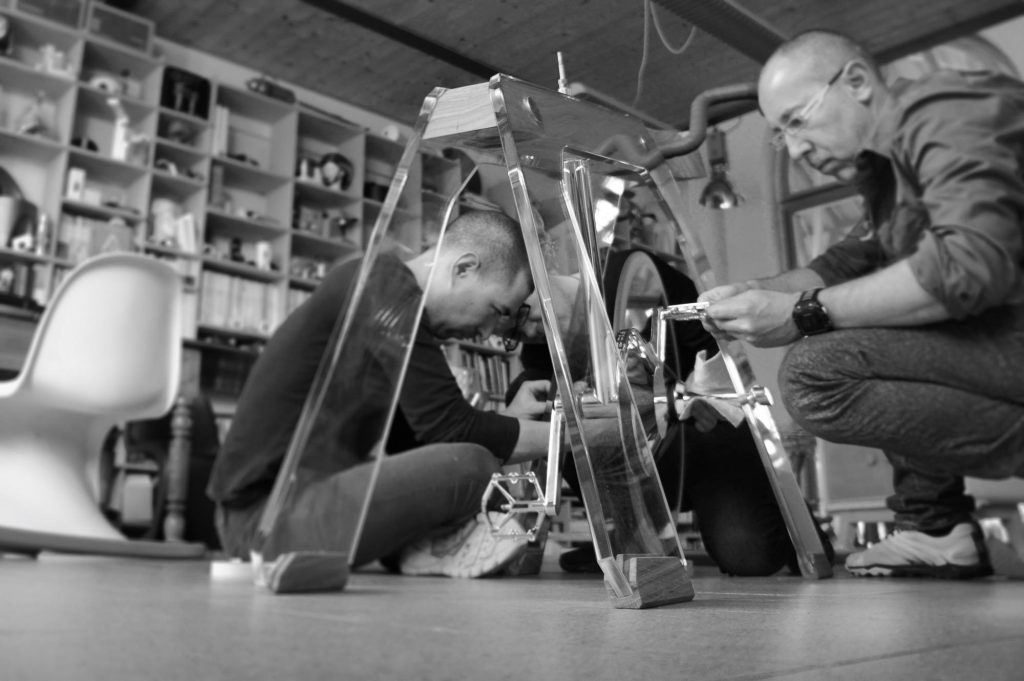