On the occasion of Parcours Bijoux 2020, Adornment has the pleasure of presenting the exhibition HUMAN SPACE IDENTITY which includes the works of four Italian jewellery artists and designers, Laura Forte, Letizia Maggio, Simona Materi and Francesca Mazzotta, together with an artist from Mexico, Raquel Bessudo. 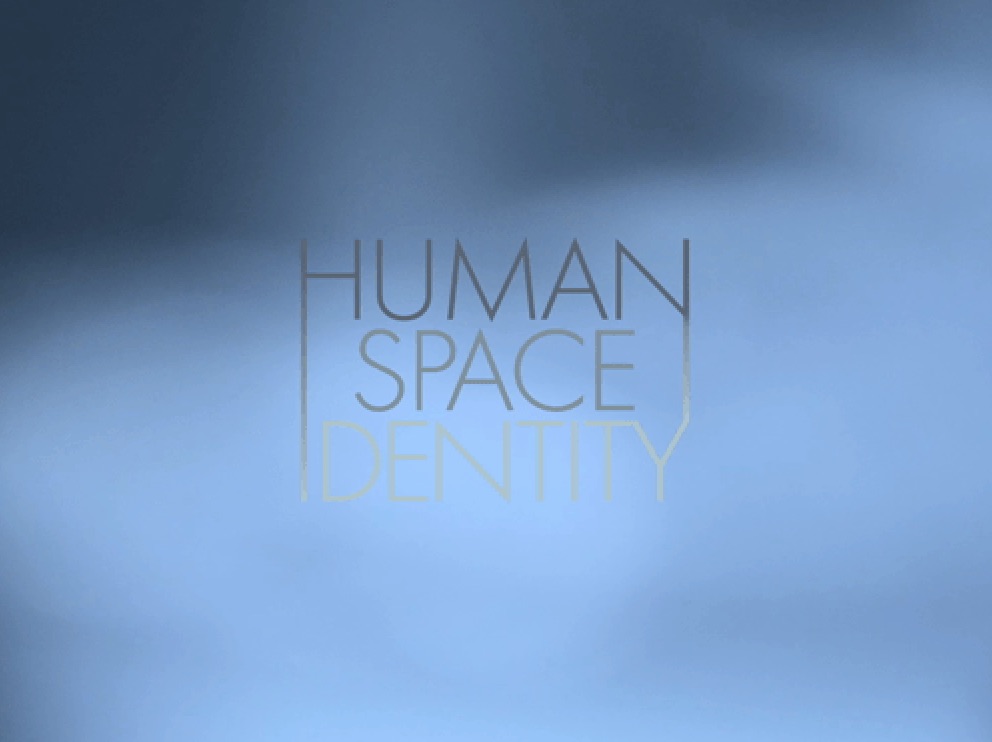 The exhibition will be held at Galerie Sophie… etc! from 16th to 31st October and will show the results achieved by the artists’ creative explorations, which, in a choral and specific way, deal with the theme of identity in relation to that of space, developing distinct conceptual paths and using different languages. 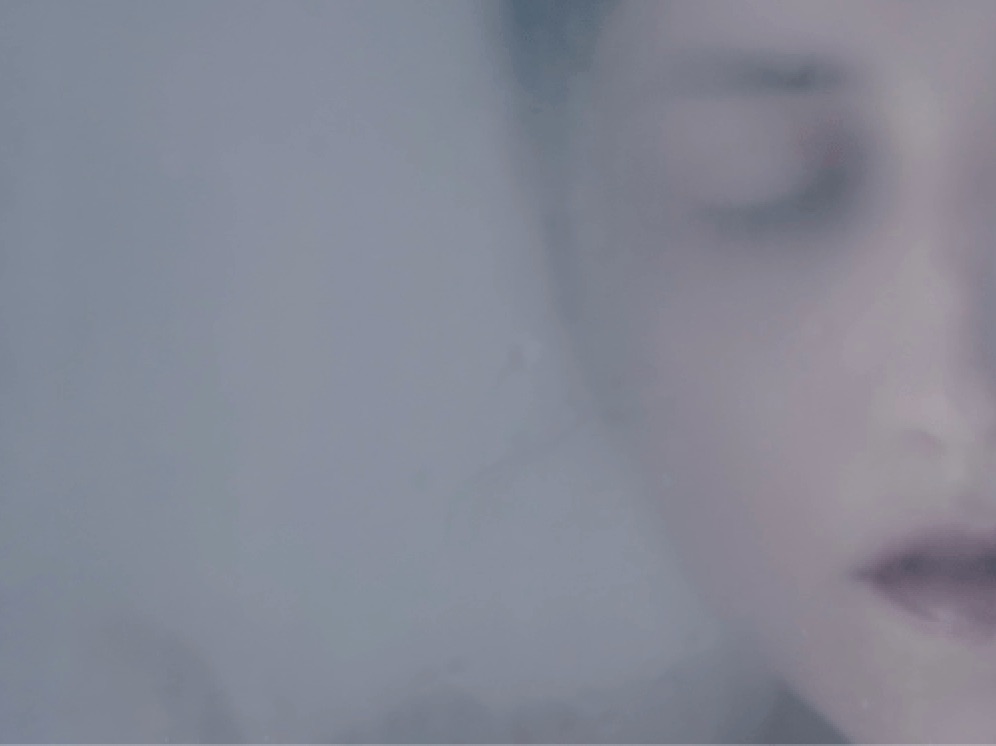 The aim of the exhibition is to question the concepts of belonging and identity at existential, social and liminal levels: how much and in what way does space, understood as a geographical, political, cultural, symbolic, circumscribed place, influence our identity and way of being? Is it possible to define the boundary, treated here as a threshold between the Self and the Other, both individual and collective, of our existence? The exhibition will present the different visions and interpretations of this relationship, multiple and iridescent, between space and identity, interpreted in various forms and languages.

The narrative path unfolds from the vision of geographical, local and territorial space seen in Francesca Mazzotta‘s creations, which usually uses aesthetics and colours typical of the baroque land to which she belongs (the “leccese” papier-mâché technique of Southern Italy, in white and gold) but who in this research has instead explored another theme dear to her: the protection of the territory and the environment from degradation. The new series called ‘Identity of Plastic’ owes its name to original pieces made of both precious materials and plastic objects found on the beaches, which give life to small creations that stimulate reflection, evoking naturalistic scenarios, and inviting us to respect nature. 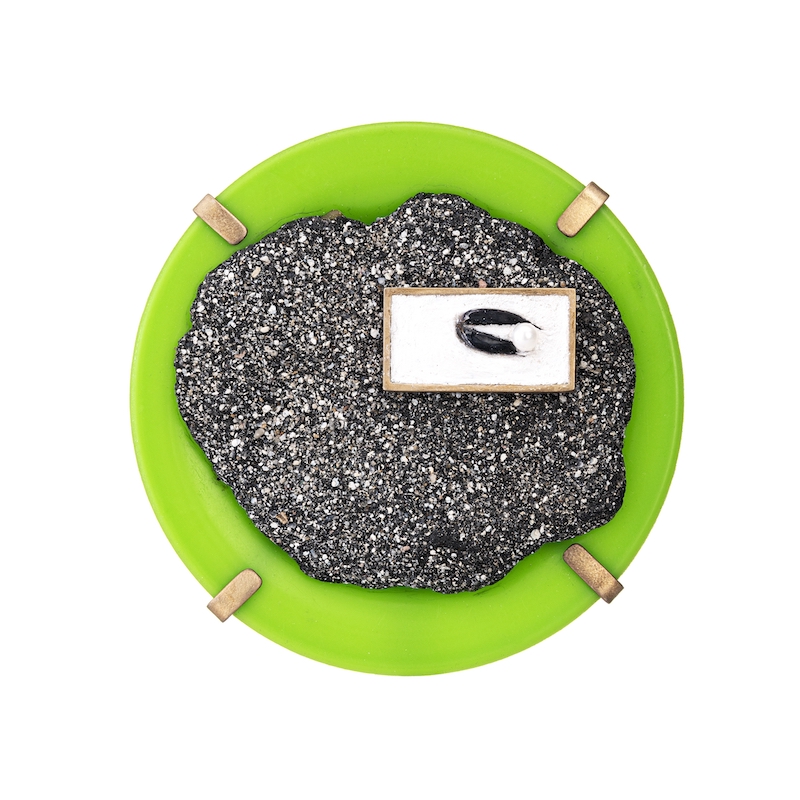 The work of Laura Forte moves in the opposite direction, in which the total abstraction of forms and thought prevails. Always characterized by extreme geometric minimalism, the ‘Utopia’ series further emphasizes the symbolic value of the forms and their combination in games of metaphysical perfection. A platonic, ideal, utopian, pure space, created in the interstices, just counteracting reality, which chaotically transports us into the continuous flow of matter. 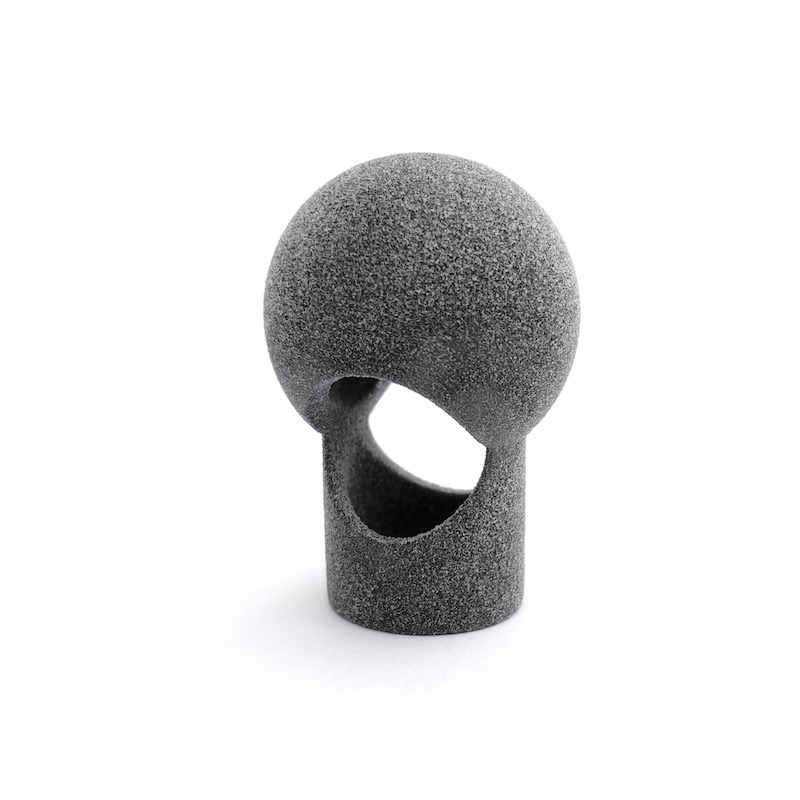 Between these two concepts, we find the works of Simona Materi, which tell of the voids and abstract places of existence through the archetypal and unconscious symbols of water, of immersion and absorption; and those of Letizia Maggio who works instead around the perception of time, rhythm and memory, as a private place of being and existence.

Simona Materi‘s research sees complementary and interconnected areas of investigation in both the landscape and the body. She investigates their rhythm, vitality, the organic expression, in an attempt to identify that original and primordial link that connects living beings. An example is the ‘Absorption’ project started in 2016 with the creation of a video that represents in graphic mode the calm waters of a lake that she has frequented since childhood, from which an oversized Plexiglas collar is born. 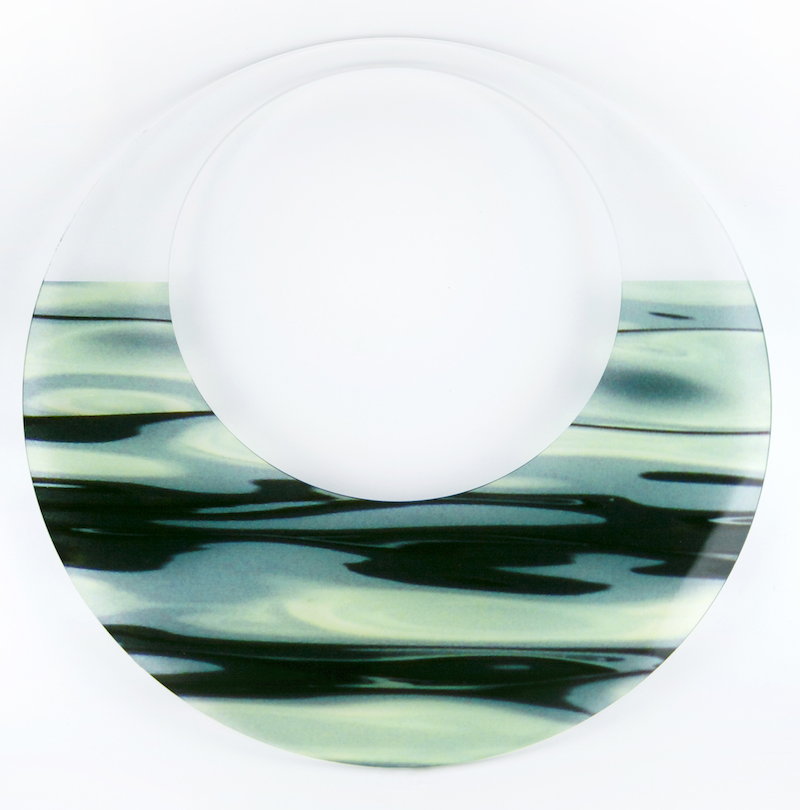 Letizia Maggio realizes a new series through the use of different media and techniques, almost definitively abandoning the insertion of metals, or precious materials, and focusing on the photographic print on canvas of the photos made by Alice Brazzit. Details of loved one’s naked bodies represent intimate and embodied portions of stories, which here take on absolute and universal value. To these pieces of prints, she includes words, sewn threads, chains, rediscovered elements of old watches, which create a puzzle whose order and composition is the staging of an existential internal landscape. 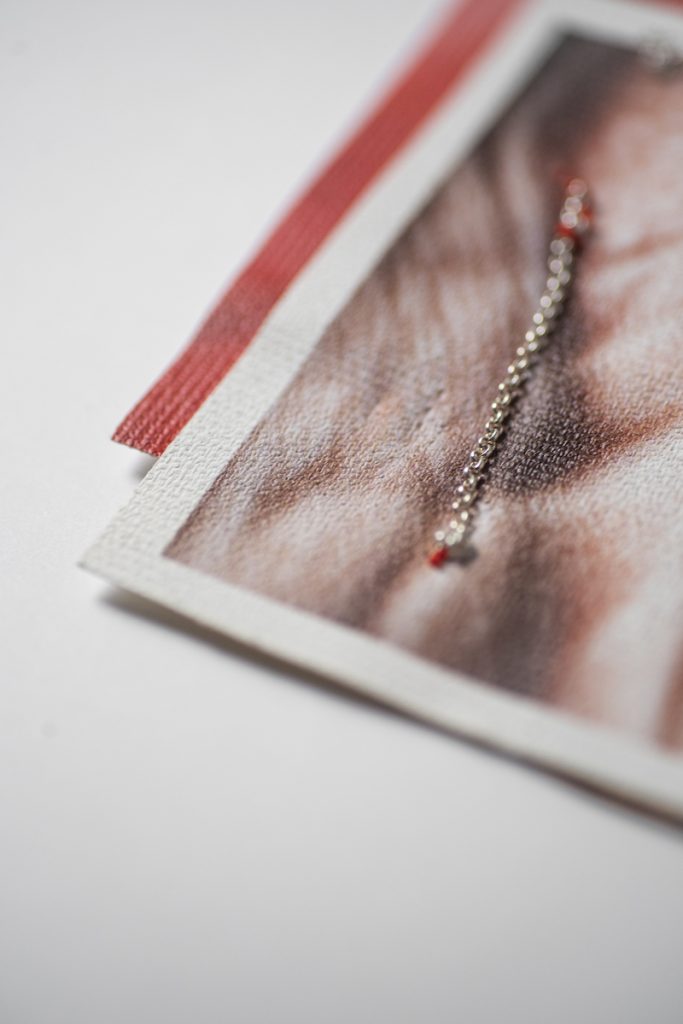 Finally, the counterbalance of Raquel Bessudo, a Mexican among Italians, to further articulate and disrupt the rules of the game between space and identity: in addition of her most traditional creations, where the typical intimacy brings out a close link between her language and the themes of childhood, she presents a work entitled ‘La Bestia’ (The Beast) that draws the outline of the border between Mexico and the United States. The name is derived from the freight train that crosses that border, to which thousands of desperate people cling in order to pass over the country. The name is enough to convey the meaning and scope of the dramatic experience of thousands of people who risk their lives in search of a place that will welcome them. 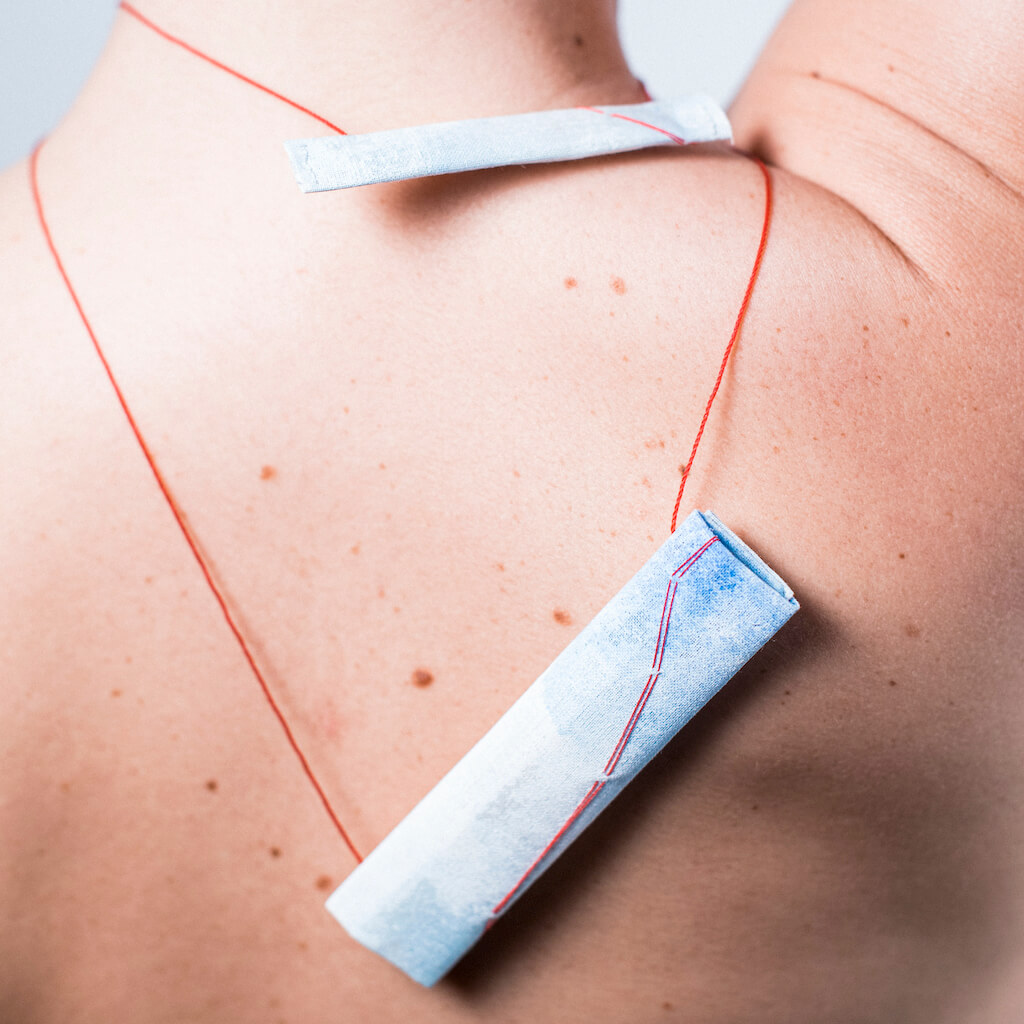 Raquel Bessudo, From what I remember VII_2020

The visionary and poetic contribution of Alice Brazzit, photographer and videographer involved on several levels in the exhibition project, allows to immerse ourselves – literally – in this fluid and boundless space where the voices and personalities of the artists blend together, thus inviting us to inhabit a new human dimension.

Raquel Bessudo is a Jewellery artist based in Mexico City, holding a BA (Hons) Fine Arts degree from CSM College of Arts and Design London UK, 2000. Her work has been exhibited worldwide in Mexico, Argentina, USA, Australia and Europe. She received a special mention from the Jury on the occasion of the II Contemporary Jewellery Latin-American Biennale 2018, “Neighbours”.

Alice Brazzit, an Italian photographer and video artist, lives in Barcelona and works in Italy and Spain. She deals with various sectors and projects, some strictly artistic, others more commercial. She is particularly active in the fields of contemporary dance and portraiture.

After having studied goldsmith in Lecce and Bassano del Grappa, Laura Forte worked in Vicenza and Lecce where she decided to open her own atelier and design studio. Her work and inspiration are internationally recognized, she combines traditional techniques to new materials and 3D methodologies.

Letizia Maggio, after having enriched her education through goldsmithing and ceramics courses with internationally well-known artists, has translated everything she has learned into research into the materials and languages of contemporary jewellery. Her works, micro-works which blend sculpture, painting and installative language, are internationally renowned.

Simona Materi is an internationally known Italian artist who deals with jewellery and contemporary art. Graduated in metal art and goldsmithing at the Manuppella State Art Institute of Isernia, she then completed her training studying artistic engraving and original art print in Naples and metalworking techniques at the Centro Tam directed by Arnaldo Pomodoro.

Francesca Mazzotta graduated at the Academy of Fine Arts, specializing in visual arts, in Lecce. She works in the field of art and design in Puglia, in southern Italy. Her main interest is the use of natural materials such as paper, wood and clay as well as ancient techniques and the Leccese tradition, which she mixes with modelling and 3D printing.

Located in the Oberkampf district of Paris, Galerie Sophie… etc! is a meeting place around contemporary jewellery. Created and directed since 2006 by Sophie Cazin, the gallery represents the various works of permanent artists. Craftsmen-jewelers, creators, visual artists, working with metal, porcelain, polymer, feather, wood… Sophie loves jewellery “differently”, the freedom of shapes and materials. A different way of thinking about jewellery and presenting it in its contemporary form. At the same time, group exhibitions are organized at the gallery, several times a year, to showcase new talents.

A/dornment – Curating Contemporary Art Jewelry is a curatorial integrated project dedicated to contemporary art jewellery. Founded by Ilaria Ruggiero, it aims to develop the knowledge and consciousness of contemporary jewellery as an artistic discipline and as ground search for technique, aesthetics and philosophy. 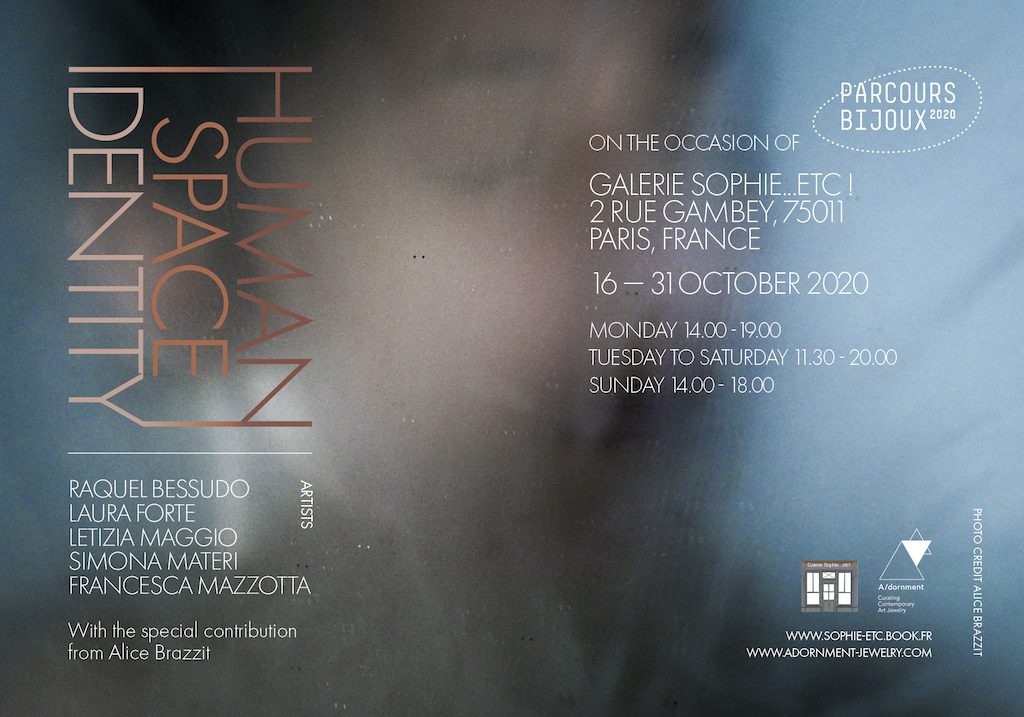