Fast Changing is the theme of the sixth edition of Milano Design Film Festival at Anteo Palazzo del Cinema, (October 25-28). The Festival presents a rich repertoire of documentaries, biographies and stories that encompass materials and technologies, new ways of building sustainably, as well as the value of repurposing and restoration. Indeed, in the mad rush to the future, the past must not be erased: reflections on the concept of icon come alive in the films dedicated to the biographies of great designers and architects, in the histories of brands and in the description of important architectural and urban projects.

The MDFF investigates the world contained in the word “design” bringing to the big screen the theme of design with the aim of providing audiences with the instruments needed to grasp all nuances of the creative journey.

As pre-opening on October 24 at Teatro dell’Arte at the Triennale di Milano, the first European screening of RAMS, the film by American director Gary Hustwit dedicated to renowned Dieter Rams 86th German designer who attended the event with him. The same film will also be screened during the festival at Anteo as part of more than 15 daily hours of events over the course of 4 days. Over 60 screenings will be offered along with debates and lectures at which directors, designers and representatives of several companies will be actively present. 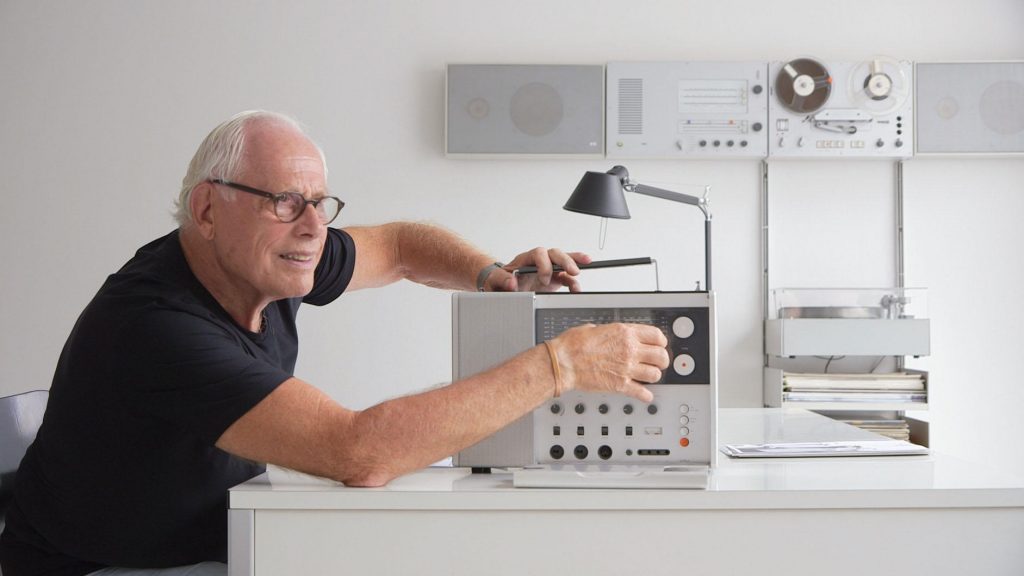 This year the curatorship is entrusted to Filippo Pagliani and Michele Rossi, from Milanese studio Park Associati, passionate about searching for new fields of action to provide personal solutions to the complexities of contemporary architecture, who present three videos – Milan (Milano), Boundaries (Confini) and Places of Power ( Luoghi del Potere) – produced in collaboration with AIR3 Associazione Italiana Registi.

The programme of MDFF 2018 offers an extraordinary variety of simply unmissable films.

Those passionate about high-end design will appreciate the film Achille Castiglioni. Tutto con un niente by Valeria Parisi (with the contribution of Ideal Standard) concurrently with the exhibition curated by Patricia Urquiola A Castiglioni (October 6 – January 20 at the Triennale di Milano), as well as Francesca Molteni’s Object to Project. Giorgetti Design since 1898, which traces the history of the company but also that of a territory that is the cradle of artisanship. 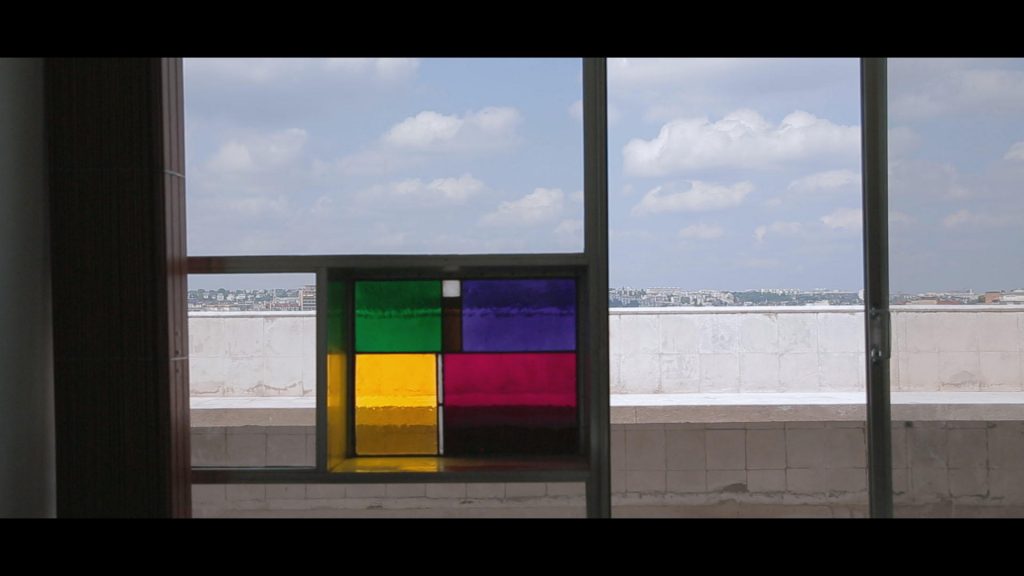 Architecture lovers will enjoy We are not seeking scenographies. The long story of Alvar Aalto’s church in Riola (by Mara Corradi and Roberto Ronchi (with the contribution of Marazzi and Unifor), Chez Le Courbusier (with the contribution of Cassina) a great classic like Albert Frey. The Architectural Envoy by Jake Gorst. Another film of great interest is Amatrice, the new year zero by Giacomo Boeri and Matteo Grimaldi, which narrates the creation of the La Piazza del Gusto, of the Tradition and Solidarity in Amatrice, designed by Stefano Boeri Architetti (architect Boeri will be present at a brief pre-screening debate).

Moreover, thanks to the support of Danish company Bang&Olufsen, MDFF is proud to present the Italian preview of Two Basilicas by Heinz Emigholz. The film compares and contrasts Denmark and Italy, North and South, Protestantism and Catholicism, through the archetype of two basilicas (one in Orvieto, the other in Grundtvig), which, despite belonging to the same architectural typology, are aesthetically polar opposites, and stimulate diametrically different associations and visions. At the end of the screening (Friday 26), the company will present the new project by Michael Anastassiades.

A rich retrospective will be dedicated to directors Ila Bêka and Louise Lemoine, who, for over a decade, have been revolutionizing traditional representations of contemporary architecture with their films. Their works have been presented at some of the most prestigious events and cultural institutions, from the Centre Pompidou in Paris, from the Metropolitan Museum of Art in New York to the Biennale di Architettura in Venice to Palais de Tokyo and the Barbican Centre in London. Six films by the directing duo (with the contribution of Arper) will be screened at the festival. Their latest work Moriyama-san, on the everyday life of an urban hermit inhabiting an extraordinary building (Moriyama house, built in Tokyo in 2005 and designed by Ryue Nishizawa of SANAA studio), will conclude the Festival and will be presented by the two directors. 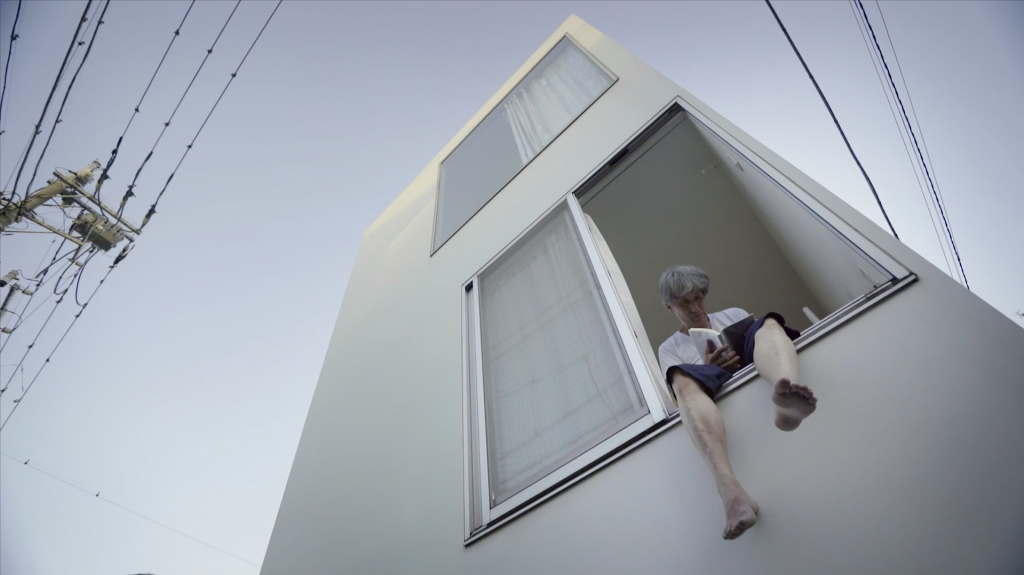 Some films by Bêka&Lemoine will be screened as part of the Interior Frames category – Visions of interiors narrated through the filmic medium. This section includes a series of shorts and feature films focusing on domestic interiors, investigated from different points of view and through a variety of filmmaking styles.

The Sustainability section offers films of great emotional impact, such as Albatross by Chris Jordan, Jackie Chan’s Green Heroes by David Hay, Natura Urbana. The Brachen of Berlin by Mattew Gandy, Cantiere 2 Harbour by Roberto Coda Zabetta and The Experimental City by Chad Freidricks, a visionary portrayal of a sustainable city imagined from as early as the 1960s by oceanographer and geophysicist Athelstan Spilhaus. Albatross will be screened at MDFF concurrently with a solo exhibition of the famous American photographer and documentary filmmaker at Spazio Rossana Orlandi. The film is a raw yet poetic portrayal of the life of the albatross and the consequences they suffer as a result of ocean pollution. This meditation screening powerfully conveys the urgent need to reconsider the use and waste of materials, such as plastic, which, while changing the world of product design, found it unprepared to predict the repercussions of such a revolution. 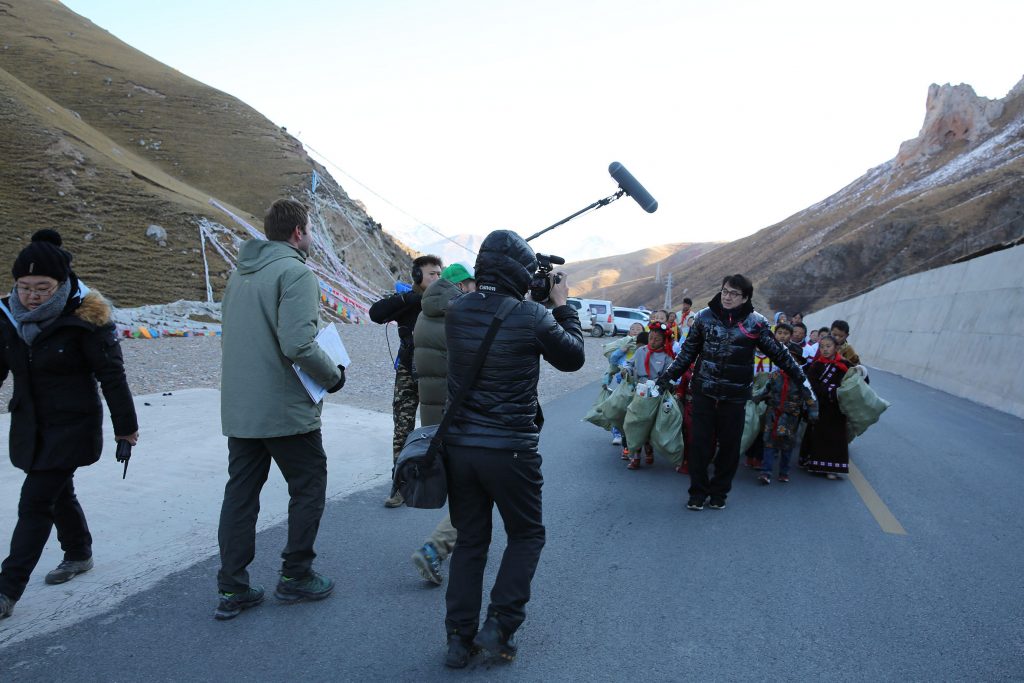 Chris Jordan’s vision is complemented by Jackie Chan’s Green Heroes, a documentary starring Jackie Chan (a true superstar of Asian cinema) that tells of the collaboration between the actor and engineer Arthur Huang, founder of Miniwiz. The story starts with an invention by Huang: TrashPresso, a mobile and solar-powered recycling plant which transforms plastic waste into building material. This potential solution to the problem of plastic pollution will be presented to the audience by Arthur Huang himself. Huang will also give a talk titled “Midway. Between Philosophy and Practice” together with Chris Jordan and chaired by Cristina Gabetti (journalist and writer), which we expect to be one of the most interesting events of the entire Festival. The animated shorts section includes Cat Days by Jon Frickey (winner of multiple awards such as the Grand Prix at the Stuttgart Festival of Animated Film ITFS, the Golden Horseman for Gender Diversity at Filmfest Dresden, and the ARTE Short Film Award) and Vermine by Jeremie Becquer. 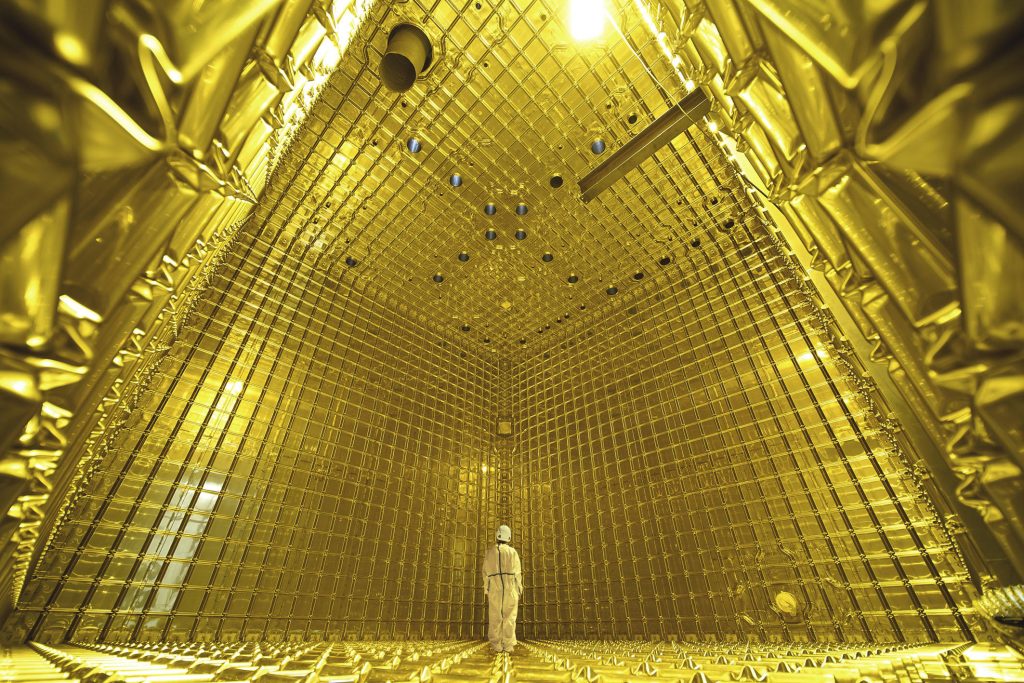 Finally, an extensive section focuses on the stories of people and institutions: Almost Nothing – CERN: experimental city, by Anna de Manincor, shows how creativity is the foundation of the technological discoveries made at CERN; Elective affinities and the sixth sense. Nanda Vigo (Affinità elettive e sesto senso. Nanda Vigo), by Marco Poma, Gualtiero Marchesi – The Great Italian, by Maurizio Gigola, is a tribute to the chef who revolutionized Italian cuisine.

There will be many occasions for debate and socializing dedicated to the world of cinema for architecture, such as the presentation of Filming Architecture – a workshop created and directed by Marco Müller as part of the activities of the Architecture Academy of Mendrisio (Università della Svizzera Italiana) – which focuses on cities and suburbs in transformation. This section boasts many insightful screenings, such as Moscow 4, curated by Irina Korobina, which tells of the transformation of Moscow from 1918 to the present day.

Finally, the 2018 edition launch the Architecture Film Award, an International Architecture and Cinema Award. Born from the collaboration between Milano Design Film Festival (MDFF) and the Fondazione of the Order of Architects P.P.C of the Province of Milan, this biennial award is aimed at selecting films (fiction, documentaries, documentary films, feature films, shorts) which focus on different aspects of architecture and landscape. This project hopes to promote the production of cinematographic works dedicated to these disciplines. 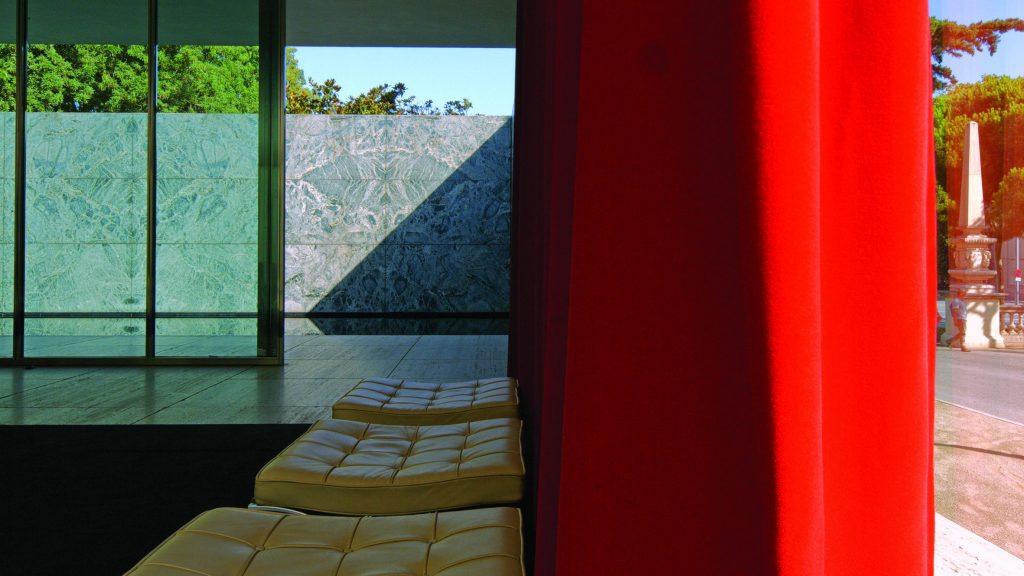 As in previous years, our corporate partners play a key role in the running of this Festival. Thanks to the kind support of Arper, Bang&Olufsen, Braun, Cassina, Giorgetti, Ideal Standard, Marazzi, Margraf, Molteni Museum e Unifor and Salone del Mobile.Milano, MDFF features in its programme a wide range of films of incredibly high value. In addition to the support of these prestigious Film Partners, the Festival benefited from the patronage of the Municipality of Milan, of the Ministry of Cultural Heritage and Activities (MiBAC) and of the Order of Architects, P.P.C of the Province of Milan, as well as from the media partnership with Gruppo Mondadori and the collaboration and support of Fondazione Dioguardi.

MDFF has started to branch out in many different directions in order to promote activities aimed at stimulating the cultural debate on the world of design both in Italy and abroad, not only during the days of the festival but also throughout the year. In November, the festival will travel to Shanghai on occasion of the Chinese Design Week (ten documentaries on Italian-made fashion and design will be screened between 16 and 18 November, in collaboration with the Italian Cultural Institute) and to Egypt (Film my Design at Cairo on December 14 and 15, 2018). Events in Canada, Israel and again in China are planned for 2019: these projects will join the Milano Design Film Festival World Tour, a format launched last year.

The final programme with screenings, guests and talks is available online at www.milanodesignfilmfestival.com