‘NO FLYERS NO POSTERS. 25 years of Sónar image’

As part of Sónar‘s 25th Anniversary celebration, until June 23rd, the Centre D’Art Tecla Sala in L’Hospitalet hosts an experiential tour through the numerous themes that have shaped the Sónar campaigns over the last 25 years.

‘NO FLYERS NO POSTERS. 25 years of Sónar image’, curated by Amelie Aranguren, is not an exhibition organized chronologically or thematically, but an immersion into the amazing world of Sergio Caballero (Barcelona, 1966), co-director of the festival and the artist behind its campaigns. It is a world that is sometimes fabulous and supernatural, other times provocative, naturalistic or simply moving.

In 1994, together with Enric Palau and Ricard Robles, Sergio Caballero created Sónar; the pioneering festival which today is a global reference point for music, creativity and technology. Bringing together over 120,000 visitors in Barcelona in June, Sónar is widely regarded as the meeting point for contemporary electronic culture, and a platform for the latest innovations in advanced music and artistic disciplines. Since 2002, the festival has celebrated a further 60 editions in cities such as London, Tokyo, Chicago, New York, Sao Paolo, Reykjavik, Stockholm, Istanbul, Copenhagen, Cape Town, Buenos Aires, Bogotá or Hong Kong.

As one of the three directors of Sónar, Sergio Caballero is responsible for the festivals always provocative. As an artist, he has worked across a range of media and disciplines, from fine art to conceptual art, film and composition. The exhibition is in itself a large installation that revisits a sizeable selection of Sónar’s distinct iconography. Shying away from flyers, posters and other conventional digital media formats, this collection of different works – videos, installations, sculptures, documentation and photographs blur – question and distort the onlooker’s reality and their memories of Sónar imagery. It features the famous ghosts from 2010, the telekinetic twins from 2006, Maradona in 2002 and the parents of the festival’s organizers in 1997, among others. 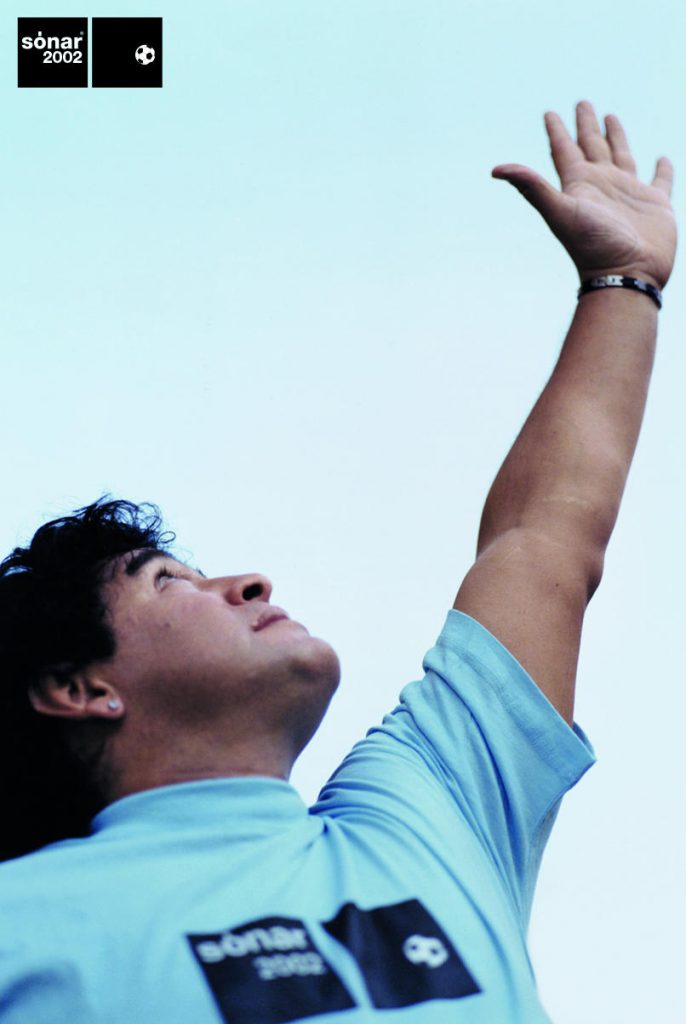 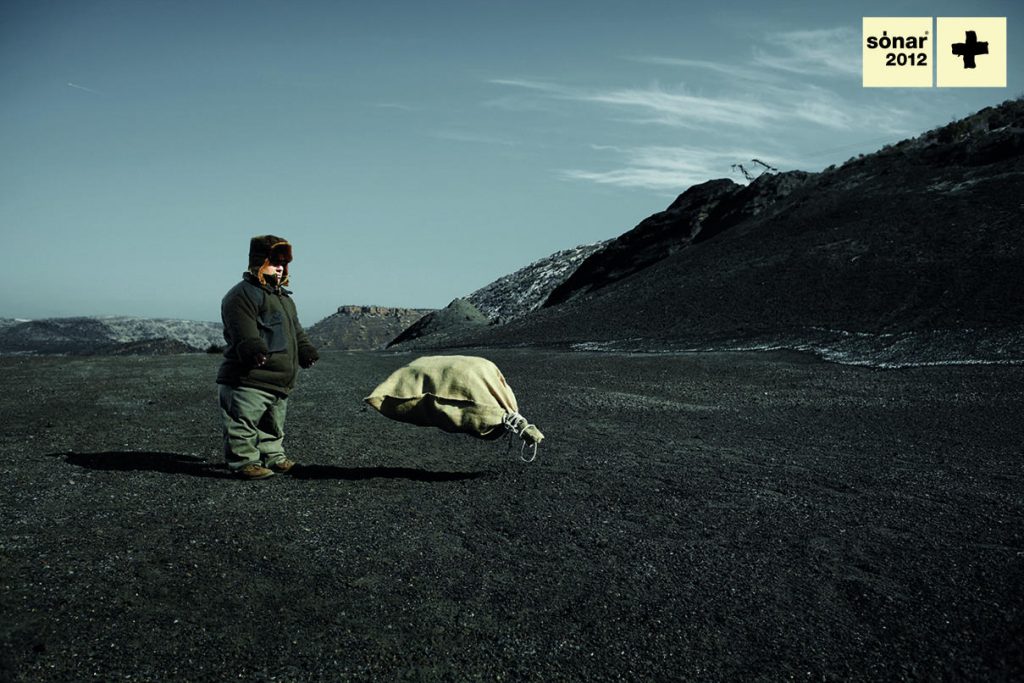 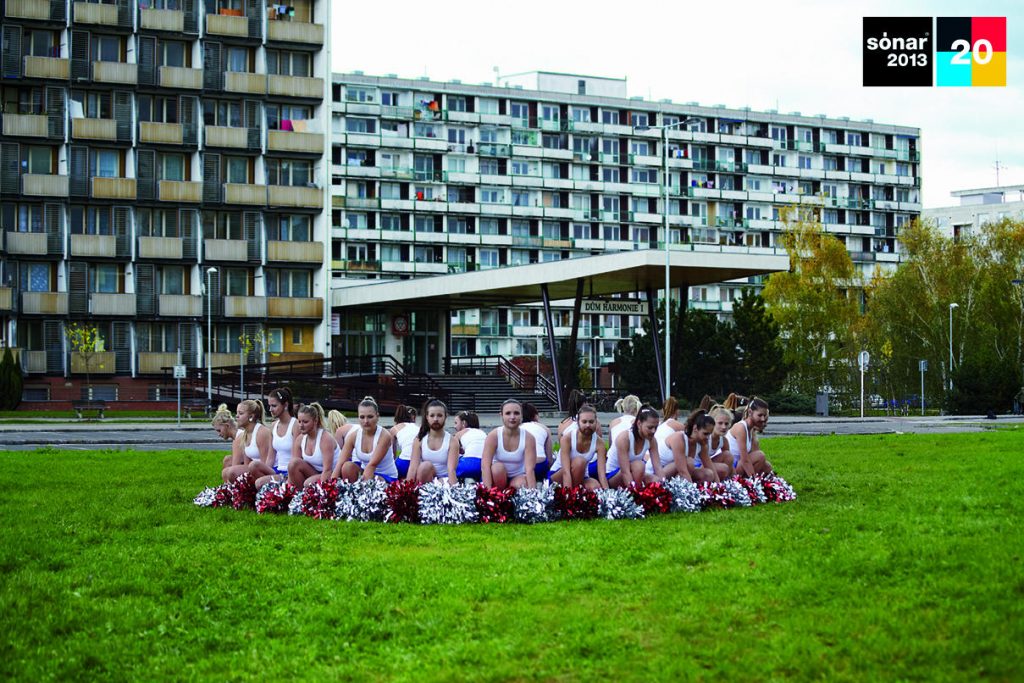 Through a selection of more than 50 pieces distributed throughout 10 rooms, the visitor is immersed in the fascinations and obsessions of Sergio Caballero’s creative corpus: families, objects and celebrities or cult figures, the mythification of the work of art, orthodox surrealism with acerbic humour, a fascination with transcience and cold snowy landscapes, are all recurring themes with which Caballero has cultivated in the different campaigns that have inspired the festival.

The exhibition is in constant tension between the romanticised and de-romanticised concept of art, which repeatedly attacks the idea of permanence and consecration, while at other times incorporating Duchamp’s principle of common objects obtaining value by simply placing them on display. Caballero constantly questions the role of institutions in constructing and validating collective memory. 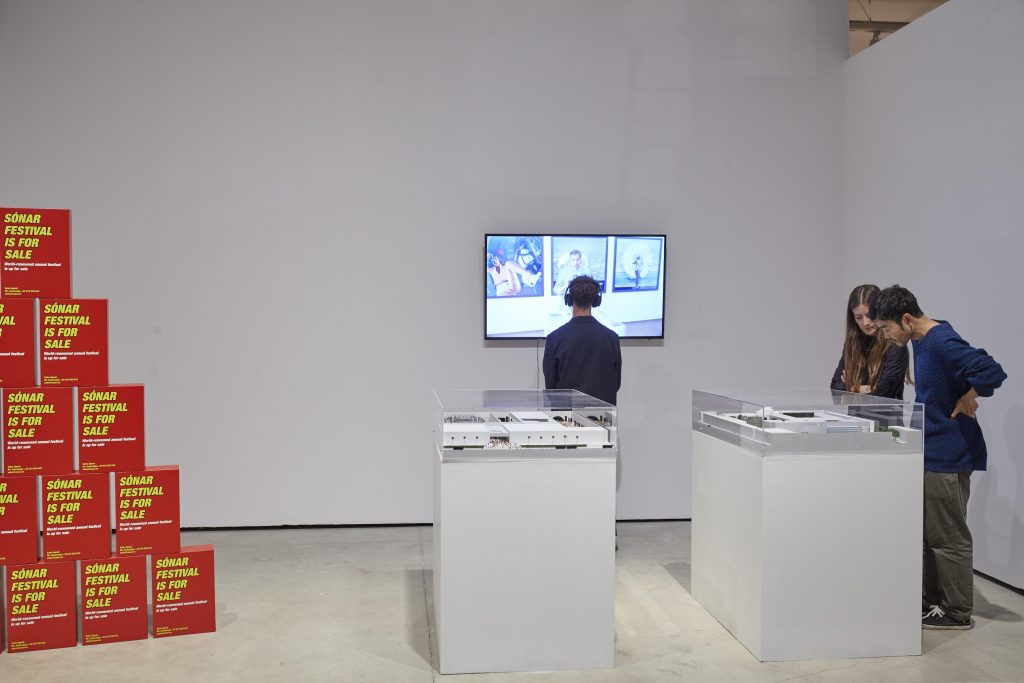 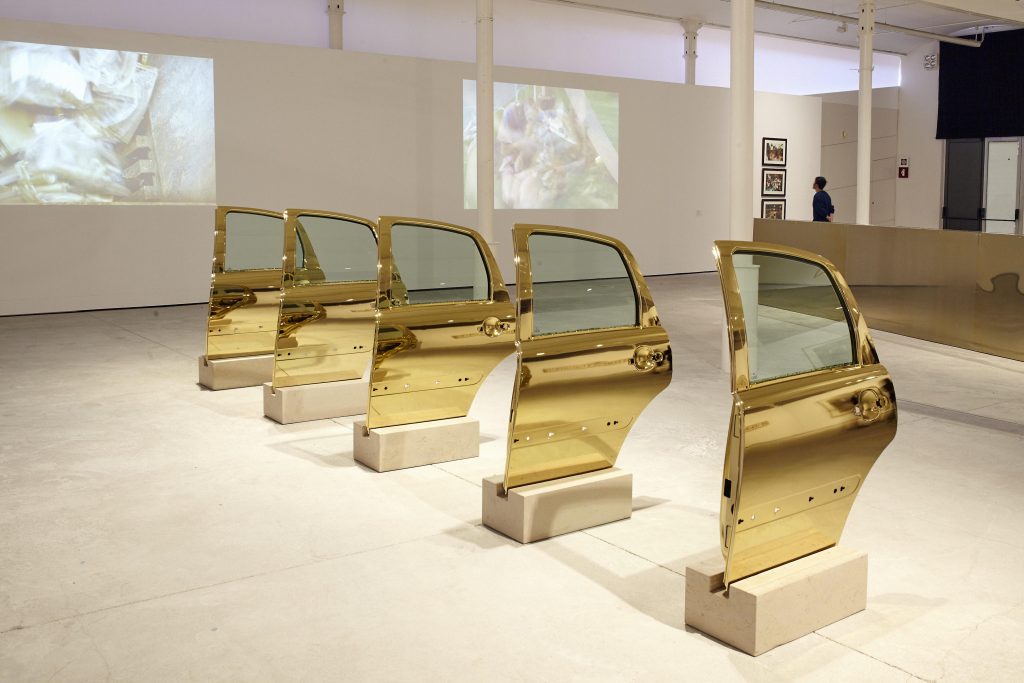 The exhibition is also a gift for fans and Sónar history fetishists. Those who eagerly await each year’s image will recognize objects, clothes, models, photographs and sculptures from the festival’s campaign icons and characters: from the parents of the organizers, to the family with urinary incontinence, through to the telekinetic twins, the car modding enthusiasts, La Pajarraca or the ghosts of “Finisterrae”, among others.

Throughout the exhibition, the artist poses the question of what constitutes the value of a work of art and how this is defined: a problem that Caballero has faced by means of a wholly unconventional method such as via the campaigns for a music and technology festival that is now 25 years old. Since the beginning, Sónar’s image has been one of the festival’s main appeals. His work has seen Sónar posters, spots and merchandising aesthetics playing with often ironic and provocative elements, far beyond the type of images usually associated with electronic music. The process begins from the moment the festival ends, at the start of each summer. “But all the consistent inconsistencies – says the curator – delirious visions of fantastically beautiful landscapes and disjointed narratives that encourage us to escape our reality – and vice-versa – would stay as ideas in the fertile imagination of their author; if it wasn’t for his uncommon capacity for making dreams a reality. It’s this ability to cross lines and boundaries, turning the outrageous into the poetic, the mainstream into leftfield or the supernatural into cute that we’re able to experience first hand in this exhibition that goes much further than flyers and posters.”

The 2018 image commemorates 25 years of the festival and is a mission that has been two years in the making and aims to travel much further, specifically to the exoplanet Luyten Star b (GJ273b). Thirty-five artists synthesize their musical exploration in the form of 10-second pieces of music into space transmitted to this exoplanet which is only 12.4 light years away from Earth and meets the criteria for possible intelligent life. Artists include Alva Noto, Kate Tempest, Daito Manabe, Squarepusher and Niño de Elche. The first transmission took place on October 16, 17 and 18, 2017. Sónar’s second transmission to Luytens Star b takes place on 14, 15 and 16 May, in collaboration with the Institute of Space Studies of Catalonia (IEEC) and with astrophysicist Yvan Dutil, creator of a coding system for messages intended for communication with extraterrestrials and a member of SETI (Search for Extraterrestrial Intelligence). The transmission will also include 3 pieces of music created by festival contest winners, selected from among 400 submissions hoping to be part of this unique collective message to extra-terrestrial intelligence. We could receive an answer within 25 years, which would coincide with the 50th anniversary of Sónar. 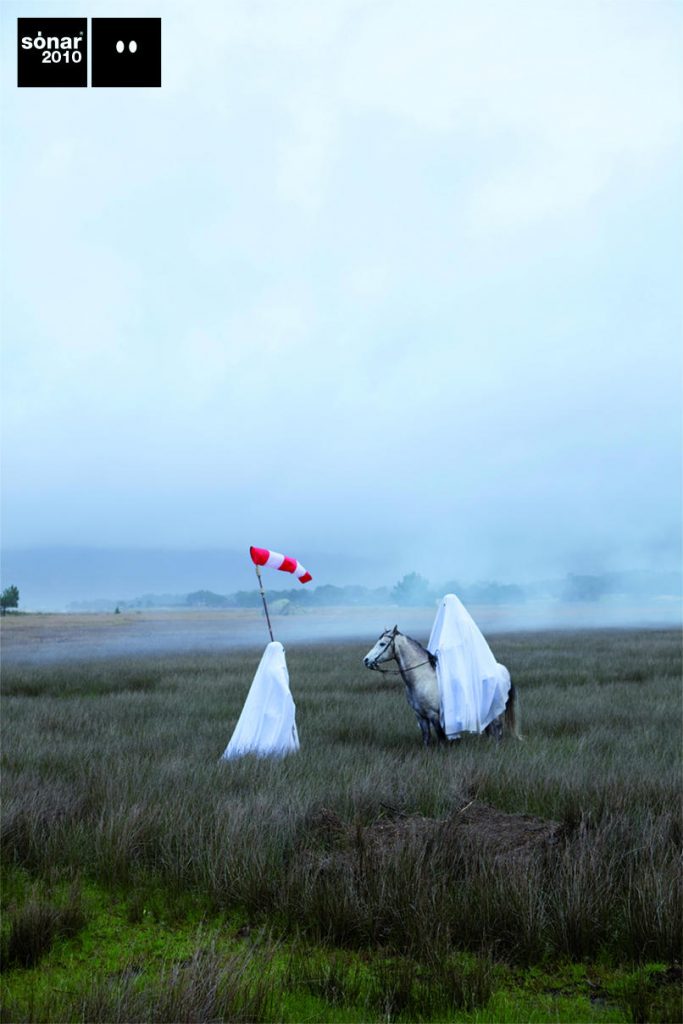 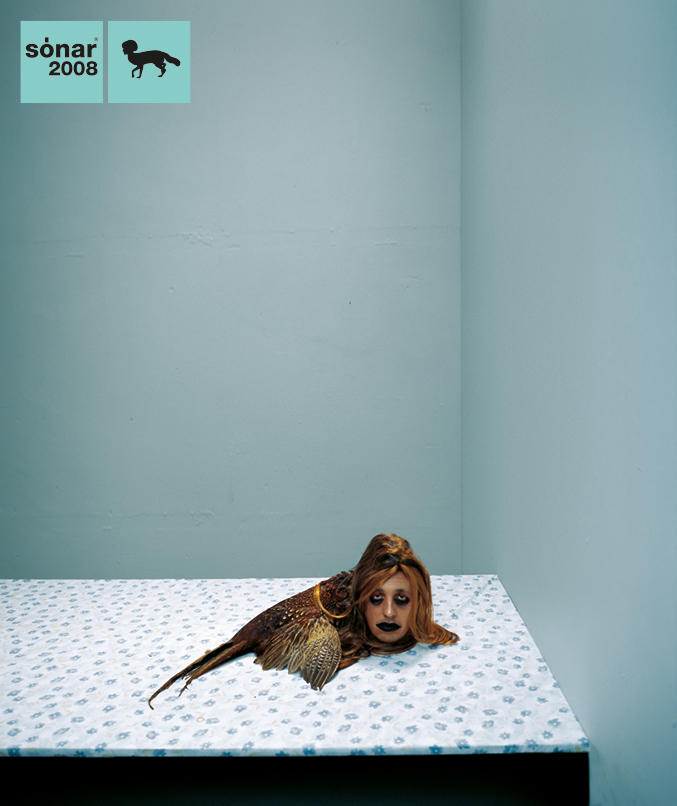