Sanlorenzo once again enters with grace and determination in the worldwide yachting stage with a highly innovative proposal, full of original and clever, rational and practical features, but always defined by an unmistakable style, declined on sobriety, volume and mass balance, assuring to the latest born the traditional Sanlorenzo elegance, by the time an essential symbol and immediate trade mark of the yard. 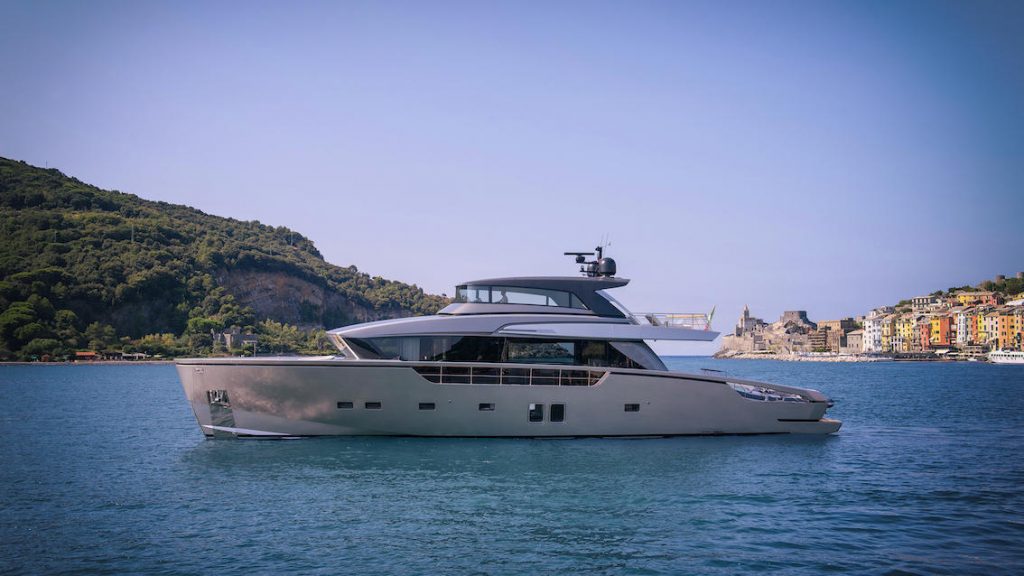 Sanlorenzo, the most iconic Italian shipyard, takes a new step forward alongside some of the most prestigious Italian architects and designers, choosing Piero Lissoni for the interior design of the first yacht from the new crossover line SX88. The model previewed on the 25th May with a presentation at Milan’s Triennale. SX88 is an innovative project, which was favoured by a strong harmony and an intense, constant dialogue between Piero Lissoni and Sanlorenzo shipyards which has once again revolutionised the traditional standards of navigation. 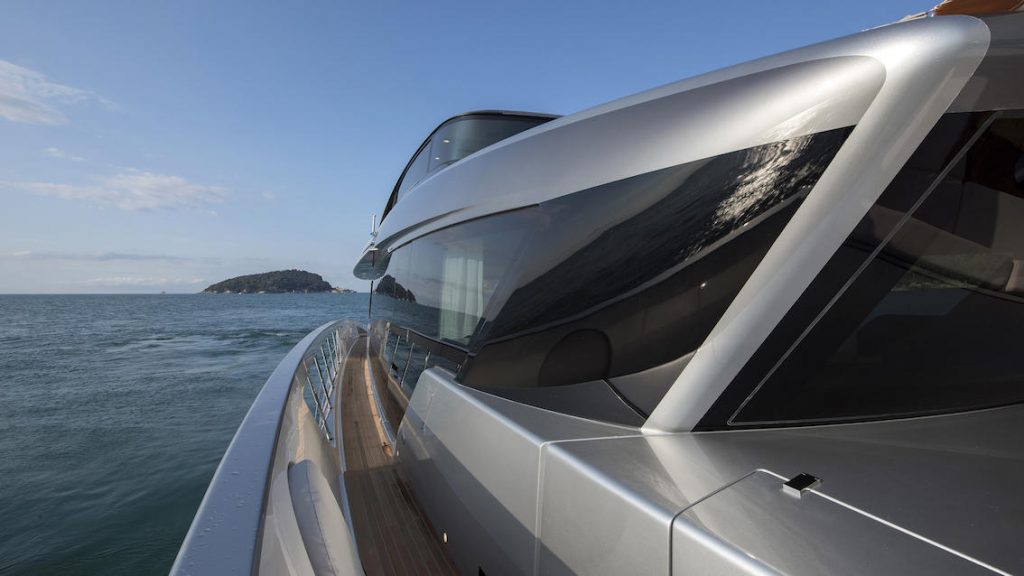 This innovative and advanced motoryacht was conceived in house by Sanlorenzo’s stylists, led by Luca Santella, yacht designer, developer of the Bluegame range of motoryachts and crowning his career with this yacht. SX88, moreover, is benefitting from the creativity of Officina Italiana Design’s Mauro Micheli and Sergio Beretta, who poured even more elegance to her exterior design. The interiors of the first unit were designed by Piero Lissoni alongside David Lopez, Stefano Castelli, and Marco Gottardi.Hull water lines were developed by the worldwide renown Lou Codega, undisputed American master in high performing ocean-going fisherman.

SX88 represents a successful and clever combination between classic fly bridge motoryachts, that Sanlorenzo was and is still a world leading builder with a SL range of five models spanning from 23m to 36m, and the recently expanding Explorer type, that Sanlorenzo read into the most successful 460EXP. 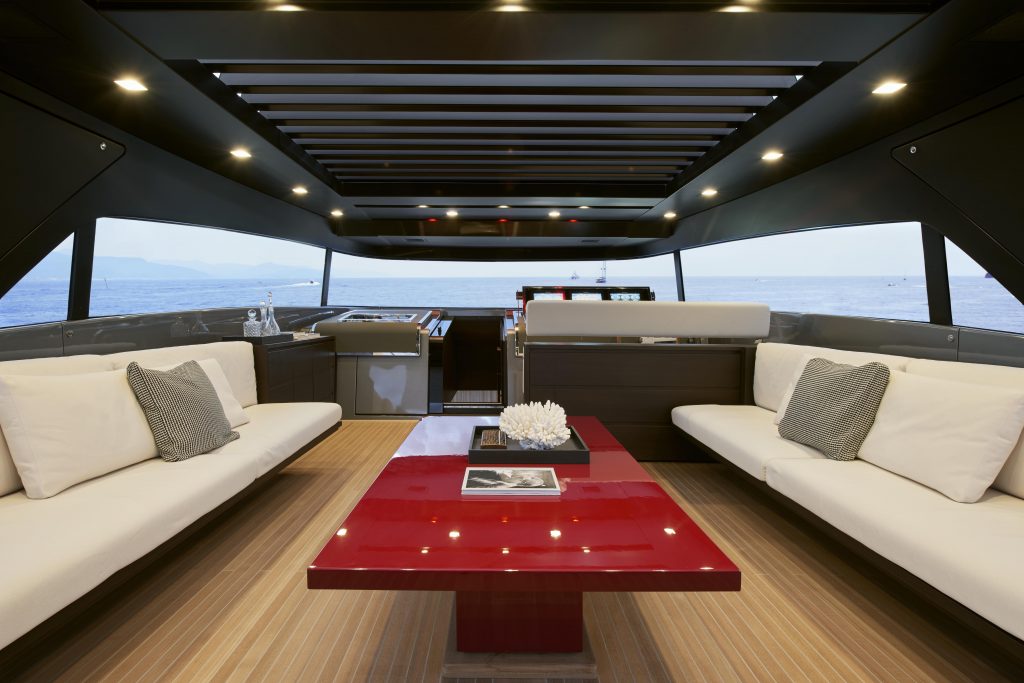 The project by Piero Lissoni for the interiors of the new yacht SX88 comes from a very simple idea: designing an open space boat. All the main deck is spreading on the same level and can be opened – according to the different layouts – from stern to bow, creating a true open space loft, a never seen before feature on a 27m. 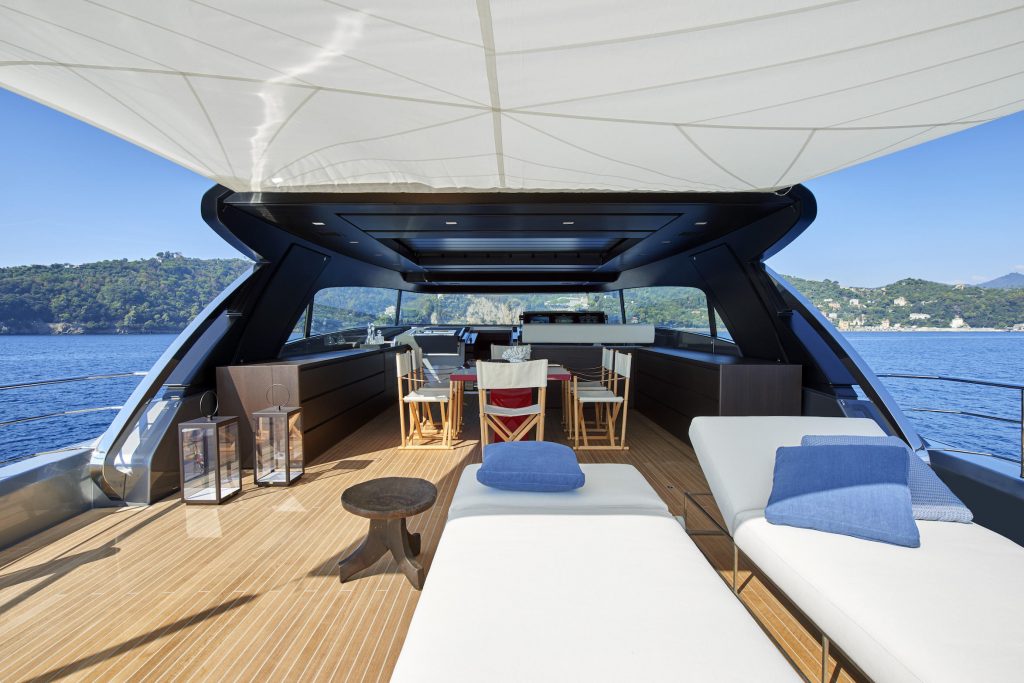 By using a totally innovative solution, Piero Lissoni re-interprets the concept of space inside the boat, which develops in a single, continuous setting from stern to bow, with an open kitchen, beside the dining room, followed by a living area with no interruptions between interiors and exteriors, thanks to wide glass walls facing the sea: “I keep picturing boats, even very large ones, as if they were lofts, that is very open, highly liveable spaces, which make it possible to be in contact with what’s around us”.

A “social” boat which offers a new way to live life on board. On the basis of the profile of this 27- metre vehicle, Piero Lissoni handles shape and function to create some sort of wide, tall sea-loft, with no rigid separations between the internal parts, thanks to a flexible layout: after the basic pattern has been determined, the project makes it possible to choose several modules, from the most extreme variation, an open space solution which represents the project’s primary code, to other variations where some parts are closed. A space that can be easily modulated to fulfil every client’s desires and which, for the very first time allows to decide where the master cabin must be set up.

Another major feature of the project was the decision to remove all excesses of functionality inside as well as outside: removing all useless extra spaces and reducing technical spaces while favouring livableness indoors, the design of yacht SX88 uses all depths. All exterior areas show that every centimetre of the boat has been conceived to be used and enjoyed. 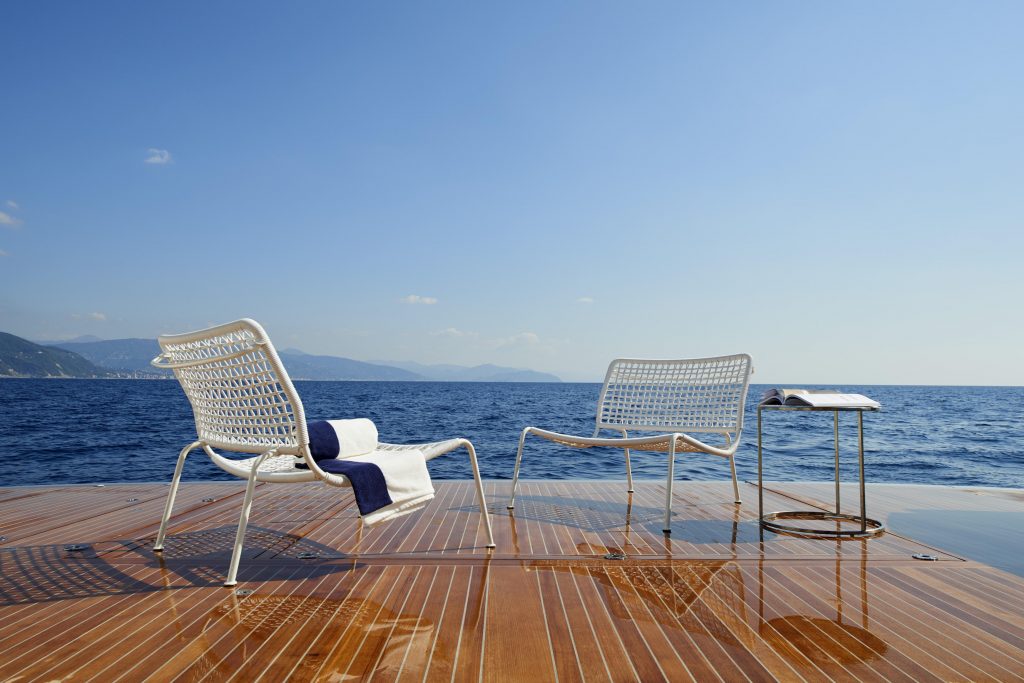 Piero Lissoni’s stylistic sign also emerges in the choice of furniture, which is a triumph of contamination: design ideas, icons of great masters, objects from the East and objets trouvésmix up to provide the setting with a domestic flavour. A key factor was the counter-current decision to not adapt furniture to space but to arrange it freely as in a home setting.

A major role was obviously played by Sanlorenzo’s collaboration with companies embodying the excellence of International design and which adjusted their products to the marine environment as far as technical features, materials and building solutions are concerned. Boffi has made a tremendous contribution in the field of bathrooms and kitchens.

In line with Sanlorenzo’s policy, SX88 also makes it possible to customise yachts from the viewpoint of design and materials. The palette of available colours and materials can be adjusted to the boat owner’s requests, so that each boat results in a unique creation.

A leader in its own field, over the years Sanlorenzo has built a very precise, coherent model, bringing the concepts of architecture and design literally on board, thanks to Patron Massimo Perotti’s intuition, firstly by collaborating with Dordoni Architetti and subsequently with Antonio Citterio Patricia Viel for the yachts’ interior designs. Setting out to escape from the values of an extremely traditional world, Sanlorenzo thus founded a brand new way to conceive boat design: their work made it possible to introduce a language and some aesthetic codes from different fields into the world of yachts for the first time, a concept of home living interpreted according to one’s experience and style. 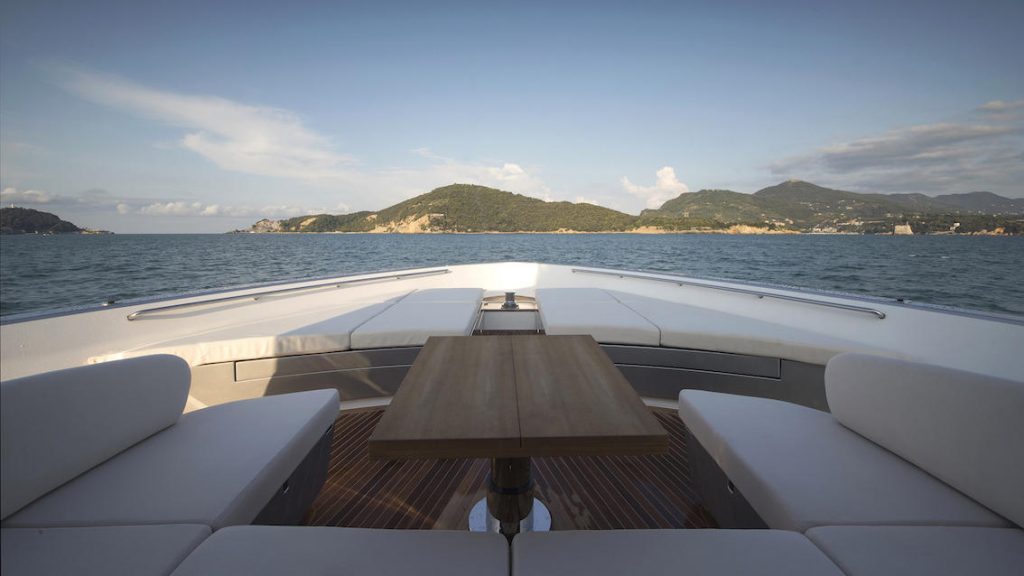 A particular attention was given by Sanlorenzo to the environment sustainability, with a specific care and sensibility to the environment where the yacht is operating and the one where is built. SX88’s construction process is based on low environment impact procedures and materials developed and tuned by Sanlorenzo. Thanks to the combination of high power lithium batteries with new lighting technologies, low consumption systems, efficient thermal insulation assured by the special new insulating glass fit on the windows, SX88 can use all the services on board for 4 to 8 hours at “zero emissions”. Because of these features Rina awarded SX88 with the Green Class. 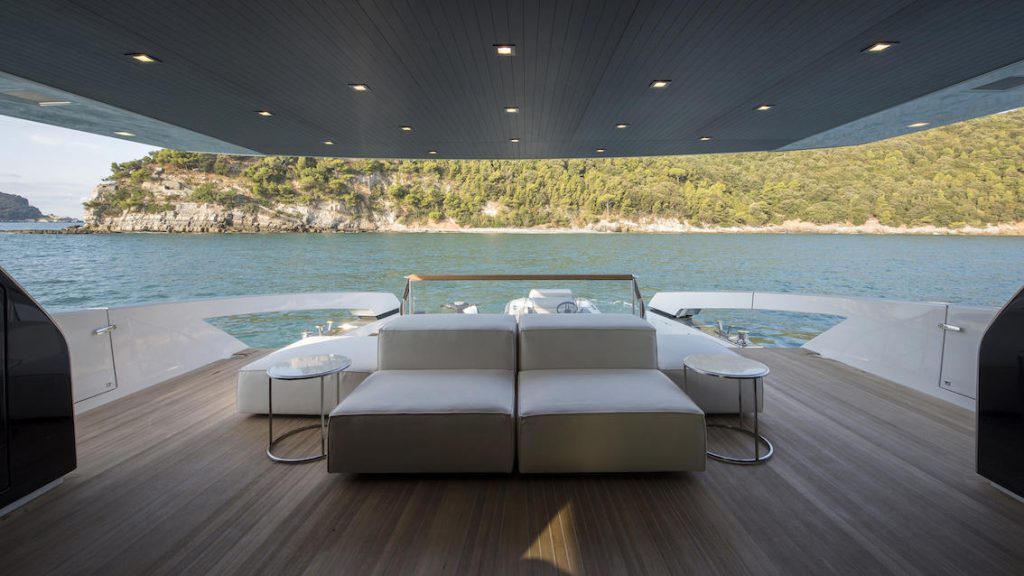 A few days after the conclusion of Elite Days 2018, a weekend of celebrations for its 60 years of business, Sanlorenzo takes part in Versilia Yachting Rendez-Vous, scheduled from the 10th of May until the 13th in Viareggio. Exhibited to a wide public of professionals and amateurs, there will be SL86, a 27-metre motoryacht and SD126, a semi-displacement motoryacht of 38 metres. 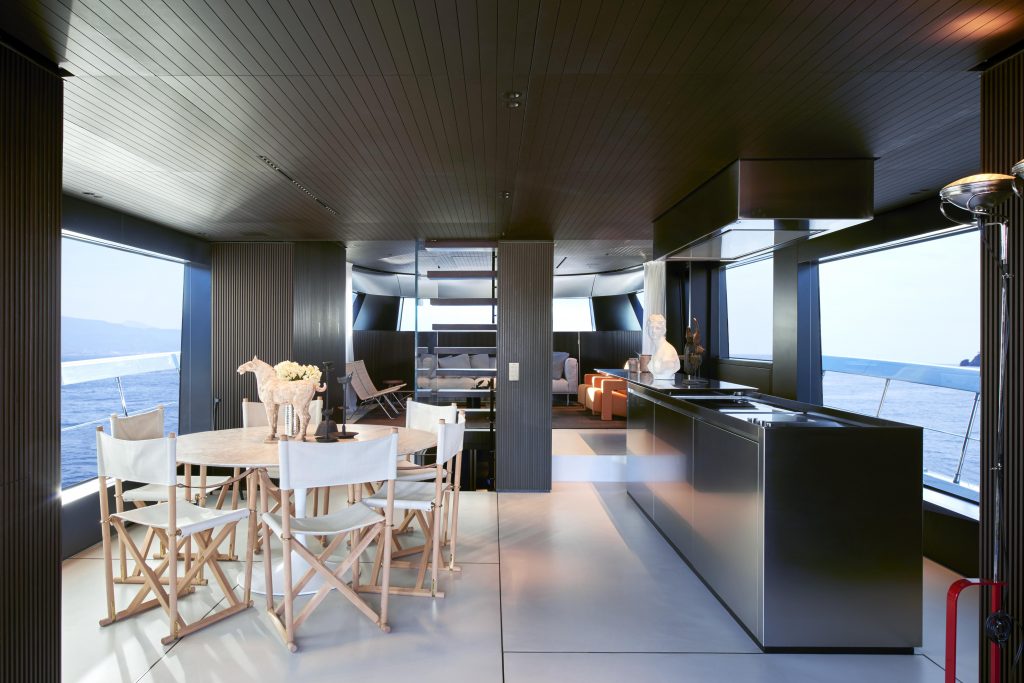 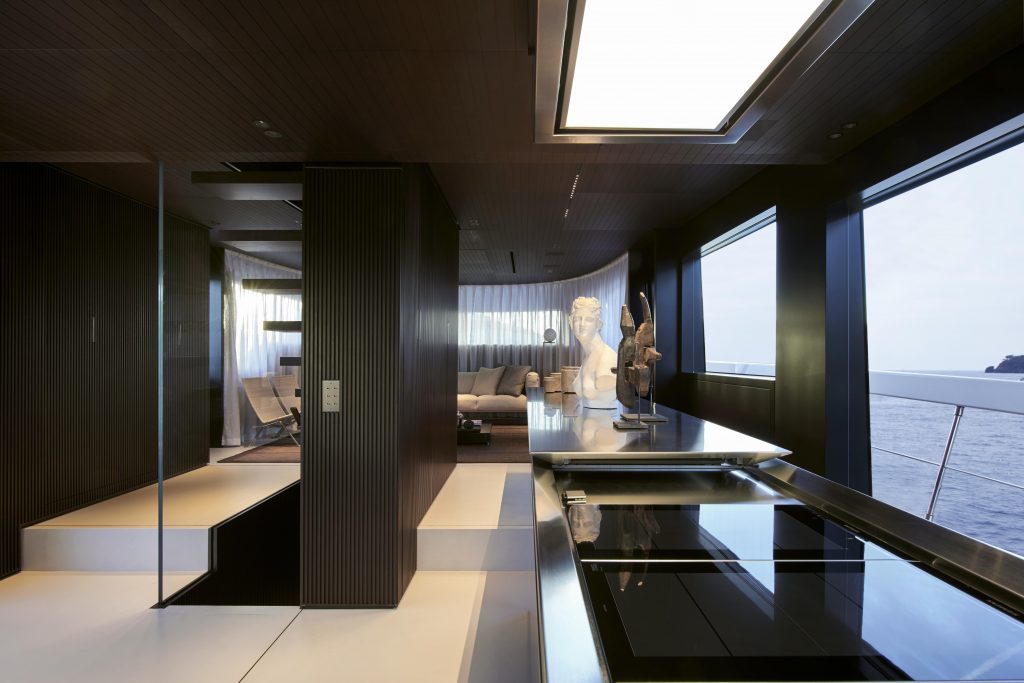 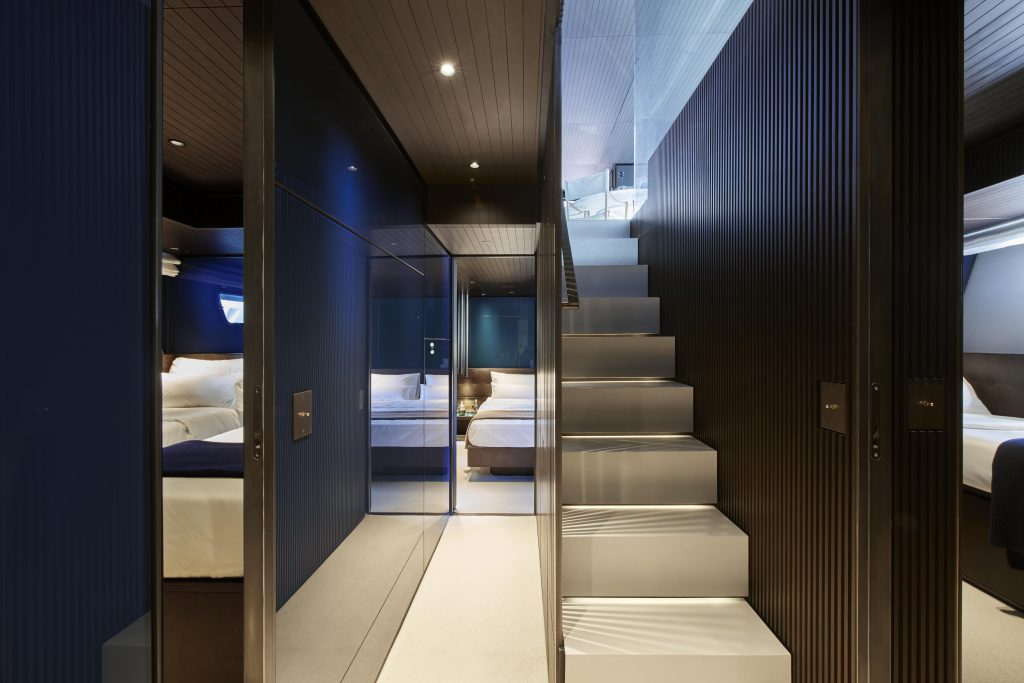 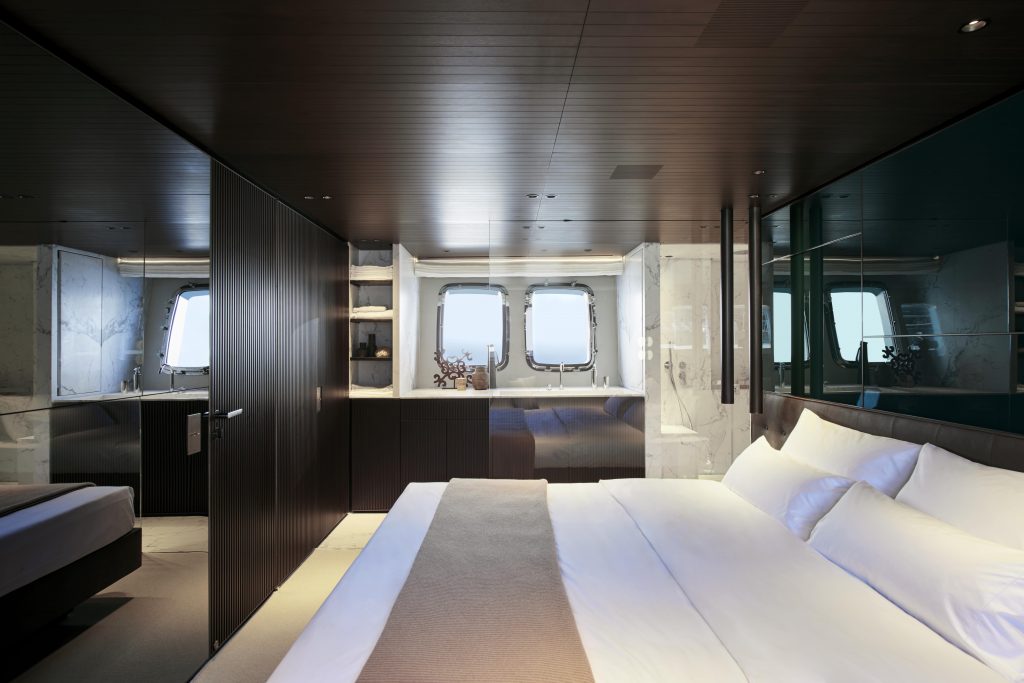 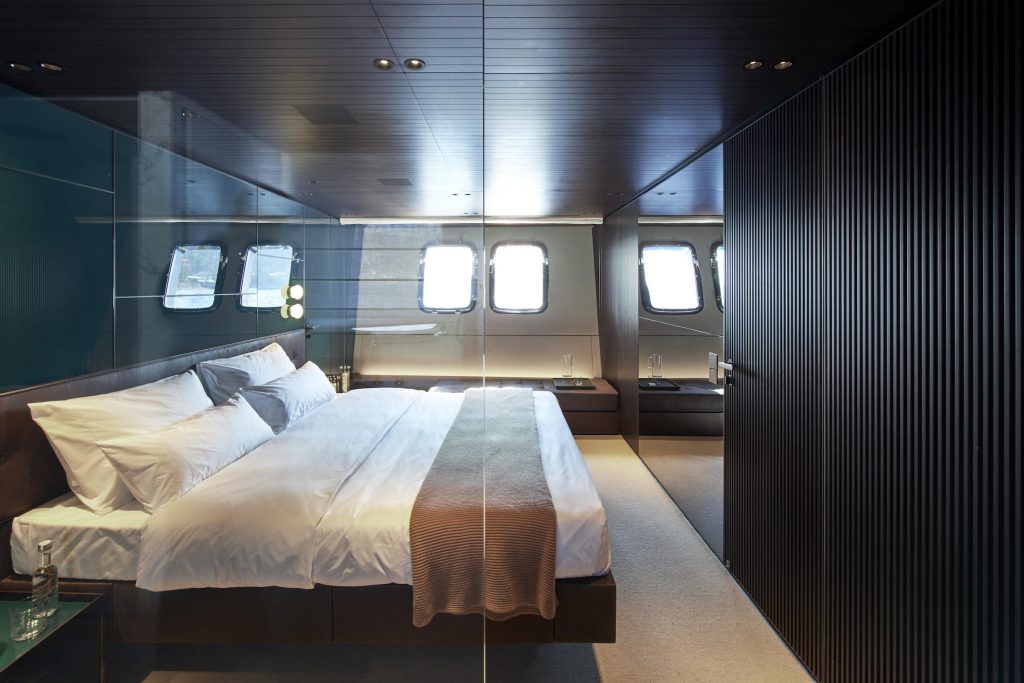 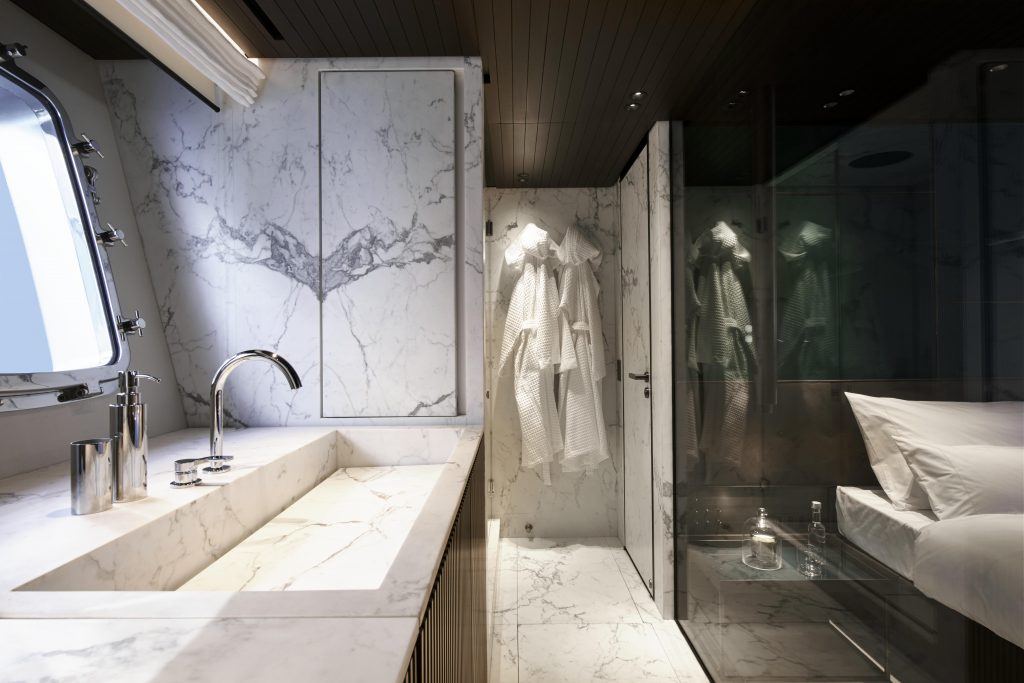 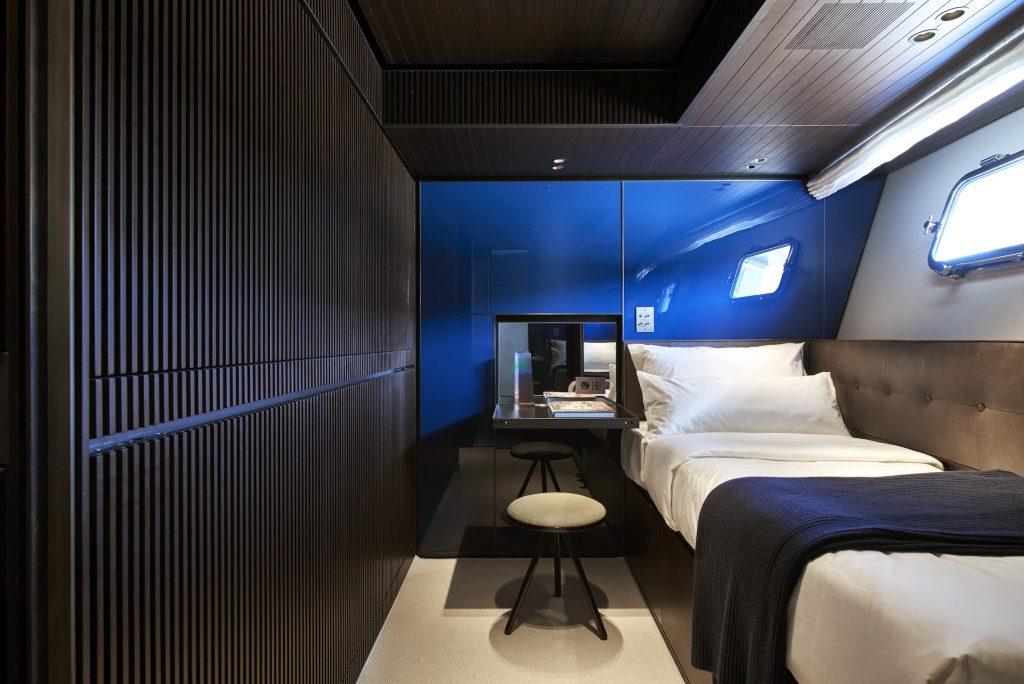 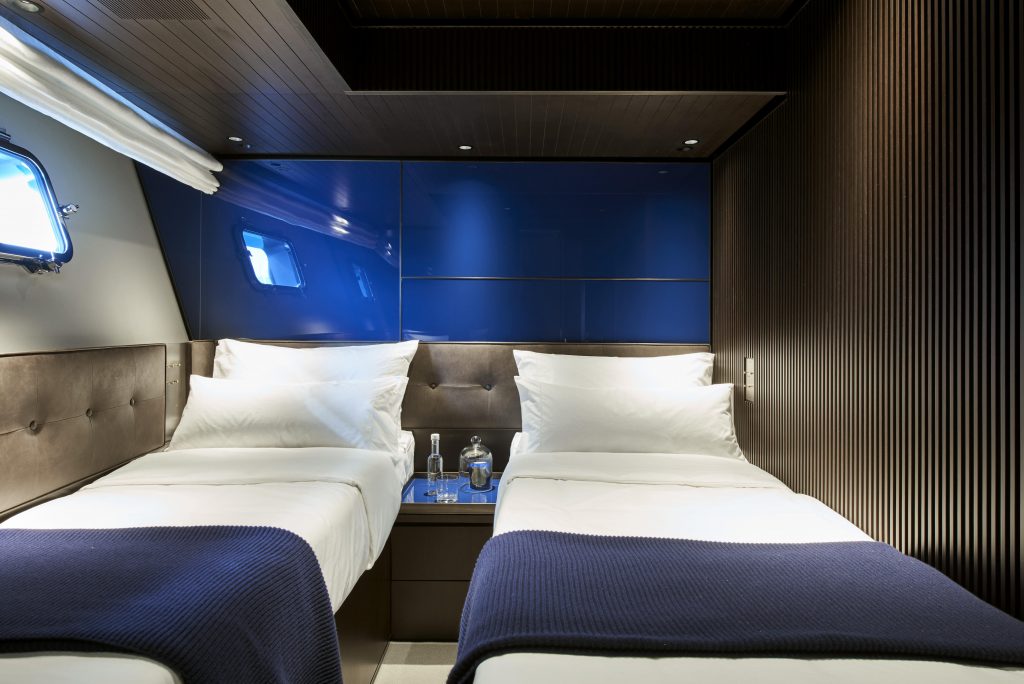