The Italian yacht builder Sanlorenzo once again enters with grace and determination in the worldwide yachting stage with a highly innovative proposal, full of original and clever, rational and practical features, but always defined by an unmistakable style, declined on sobriety, volume and mass balance, assuring to the latest born the traditional Sanlorenzo elegance, by the time an essential symbol and immediate trade mark of the yard. SX88 is the acronym of the new 27m motoryacht, first model of a full range that will span from 72’ to 104’. SX88 is a product containing different “Firsts” by Sanlorenzo, a Copernican revolution based on some unique and distinguished keys that make the yacht original and innovative. Has Grp hull and carbon fibre superstructure. Semi-displacement hull tested in the Wageningen (Holland) tank test to optimize the performances in the different speed range, up to 23 knots. Open stern to fulfil the different functions of garage, beach club, and sport activity area. Two main deck layouts: open space or Owner’s cabin. One steering position on fly bridge, that can be closed and air-conditioned. SX88 offers wide open spaces and large glassed surfaces, assuring an effective and optimized relationship between interior and exterior, more and more required by the most experienced Owners. SX88 brilliantly succeeds in matching at top level the always difficult relation between shapes and functions. The high, seaworthy bow lowers toward the stern streamlining all the mass of the yacht, but at the same time giving her an impressive look of an all-weather vessel. The superstructure is marked out by the widest glassed surfaces and is painted in dark shade to reduce the volume perception and to balance the “full” of the superstructure and the “empty” of the windows.

As on a large superyacht, the only steering position is on the upper deck, the fly bridge, protected by a windshield that can be closed by side saver windows and when needed by strataglass panels or – as optional – by an easy operating rigid structure. Thanks to this solution the fore area of the salon on the main deck is totally free and can be arranged as Owner’s cabin or remain a wide multi-functional open space. All the main deck is spreading on the same level ad can be opened – according to the different layouts – from stern to bow, creating a true open space loft, a never seen before feature on a 27m. The fore area of the main deck is fully equipped and furnished to offer a relaxing and functional living area with a double L shaped sofas with coffee tables and an extended sunbathing surface, a difficult to find solution on a 27m, with the possibility to directly connect with the interior. The stern area is as much astonishing. The level of the beach area is five steps lower than the main deck and can accommodate a 15’ tender, a jet ski and other toys. The crane to move these watercrafts is cleverly and elegantly hidden in the prolonged profile of the handrail, with no disturb of the SX88 outline. Cleared from the watercrafts, the wide beach area, extending 2’ over the water, offers 30 sq. m of beach club shaded by sunbrellas and furnished to enjoy life with the feet in the water. On the lower deck SX88 offers four (or five as option, unusual solution on a 27m) double cabins among which also the Owner’s cabin, in case the open space layout on the main deck is chosen, or three (or four as option) in case the Owner’s cabin on the main deck layout is chosen. In this case the galley is on the lower deck.

The crew quarter is astern this deck, just fore the engine room that thanks to the Volvo IPS 1200 power train is moved much back compared to position with the traditional in line transmission.

A particular attention was given by Sanlorenzo to the environment sustainability, with a specific care and sensibility to the environment where the yacht is operating and the one where is built. SX88’s construction process is based on low environment impact procedures and materials developed and tuned by Sanlorenzo. Thanks to the combination of high power lithium batteries with new lighting technologies, low consumption systems, efficient thermal insulation assured by the special new insulating glass fit on the windows, SX88 can use all the services on board for 4 to 8 hours at “zero emissions”. Because of these features Rina awarded SX88 with the Green Class.

This innovative and advanced motoryacht was conceived in house by Sanlorenzo’s stylists, led by Luca Santella, yacht designer, developer of the Bluegame range of motoryachts and crowning his career with this yacht. SX88, moreover, is benefitting from the creativity of Officina Italiana Design’s Mauro Micheli and Sergio Beretta, who poured even more elegance to the her exterior design. On the first unit the interior decoration is cared by the famous Italian interior designer Piero Lissoni.

SX88 represents a successful and clever combination between classic fly bridge motoryachts, that Sanlorenzo was and is still a world leading builder with a range of four models spanning from 27m to 36m, and the recently expanding Explorer type, that Sanlorenzo read into the most successful 42m 460 EXP.

SX88 is built and assembled in the traditional Amelia’s (La Spezia) boatyard where Sanlorenzo elected its headquarter. She will be officially introduced to the market and press during Cannes Yachting Festival, next September.

The international market already welcomed SX88, buying the first six units. Next deliveries will be available starting from spring 2018. 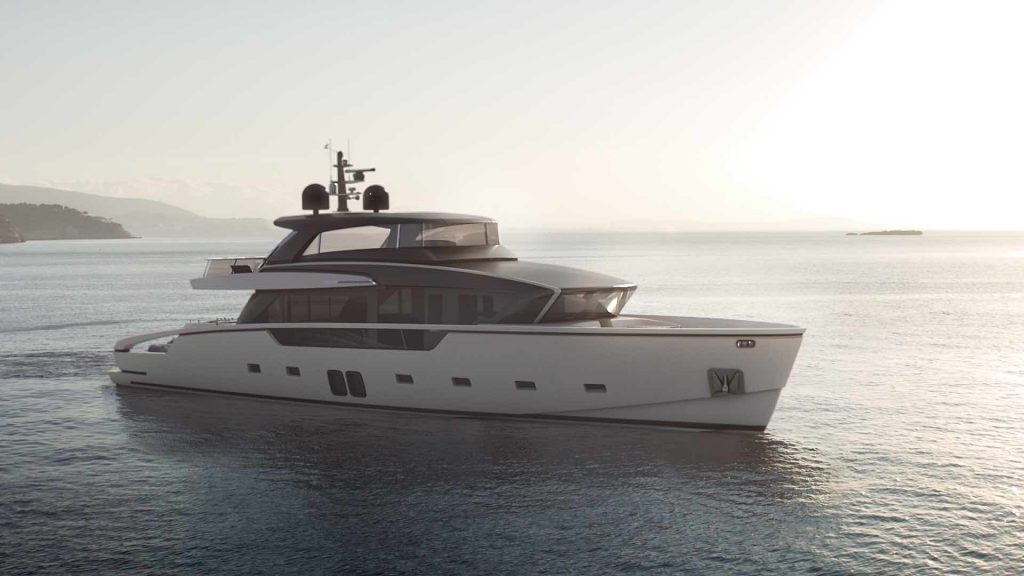 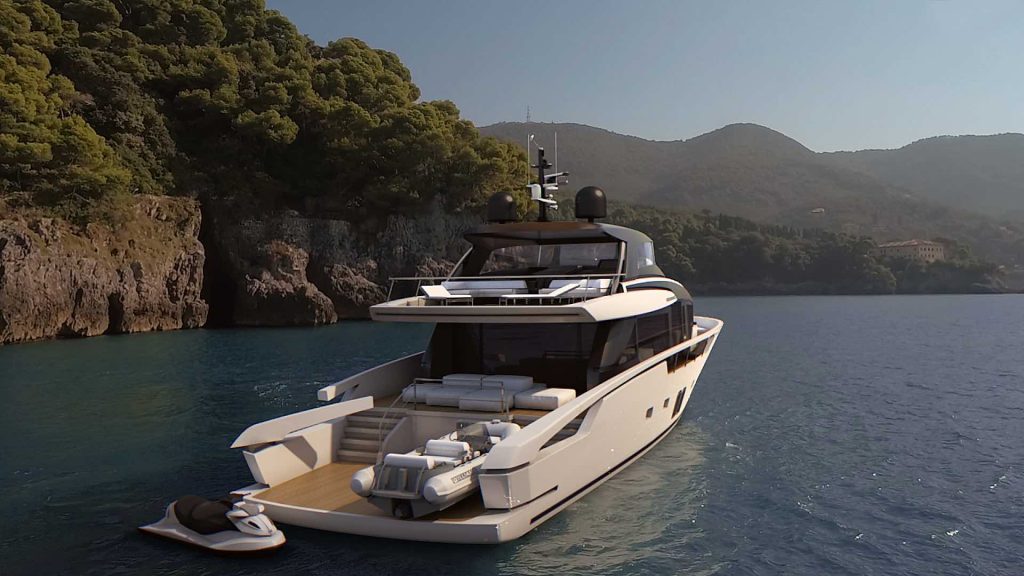 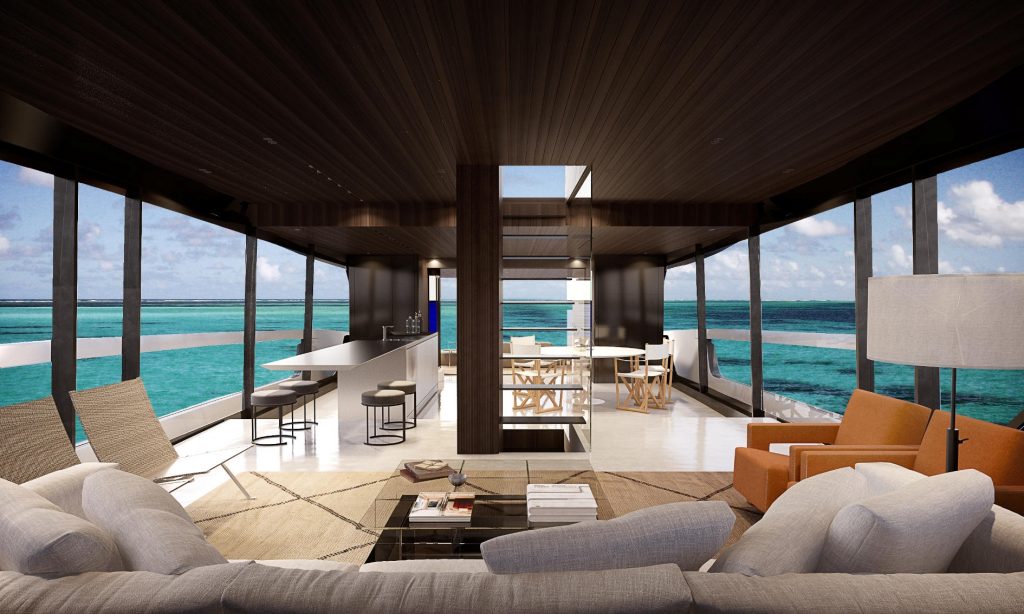