WORKING STEEL AS A TAILOR-MADE SUIT

Working since 1913, Rampinelli S.p.A. has always stood out for complex constructions and machining on heavy thick steel plates for the industrial sector with clients from all over the world. The centesimal precision of impressive functional architectures, used in the civil, automotive, steel, renewable energy and space sectors, is the key that led the company to create a furniture brand. Rampinelli Edizioni matches the excellence in the production of top quality products, its technical and production know-how, with the contemporary design of Sovrappensiero founded in 2007 by Lorenzo De Rosa and Ernesto Iadevaia, designers from south of Italy, now based in Milan. 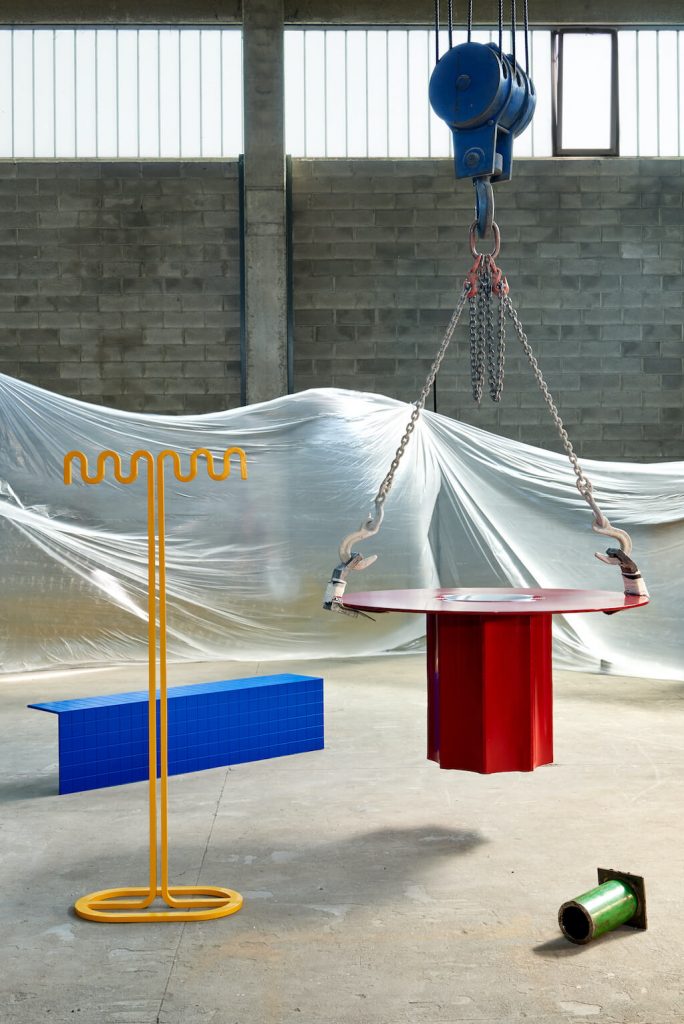 The passion for new challenges and new ventures has found in the collaboration with Sovrappensiero Design Studio the way to create a first collection that highlights the manufacturing processes, such as the CNC plasma cutting, CNC milling and manual TIG welding.

“We have embarked on a journey with the company and launched this project to share with a wider public this Italian excellence and the quality of their work,” says Lorenzo De Rosa. “The company’s know-how has allowed us to approach the project as if we were working on a tailor-made suit: the choice of steel plates and profiles of different sections and thicknesses like the choice of fabric; the plasma cutting of the parts according to the project, such as the cutting of the pieces of fabric that follow the patterns; fitting: the parts are joined manually with small welding points and with the aid of temporary components that will first be welded to the rest of the product to give structure and then removed, just like the fitting of a bespoke suit; finally, expert welding with an infusible tungsten electrode, like the seams of a seamstress hidden in the right places.”

The first collection, consisting of a table, a bench and a hanger, is based on the composition of geometric solids: the archetypal forms generated to bring the rough aesthetics of mechanical engineering into the intimacy of the domestic environment. Finally, the type of painting is inspired by the colours of the industrial machinery also present in the company.

It takes more than 50 hours of expert manpower to manufacture the table and the bench. 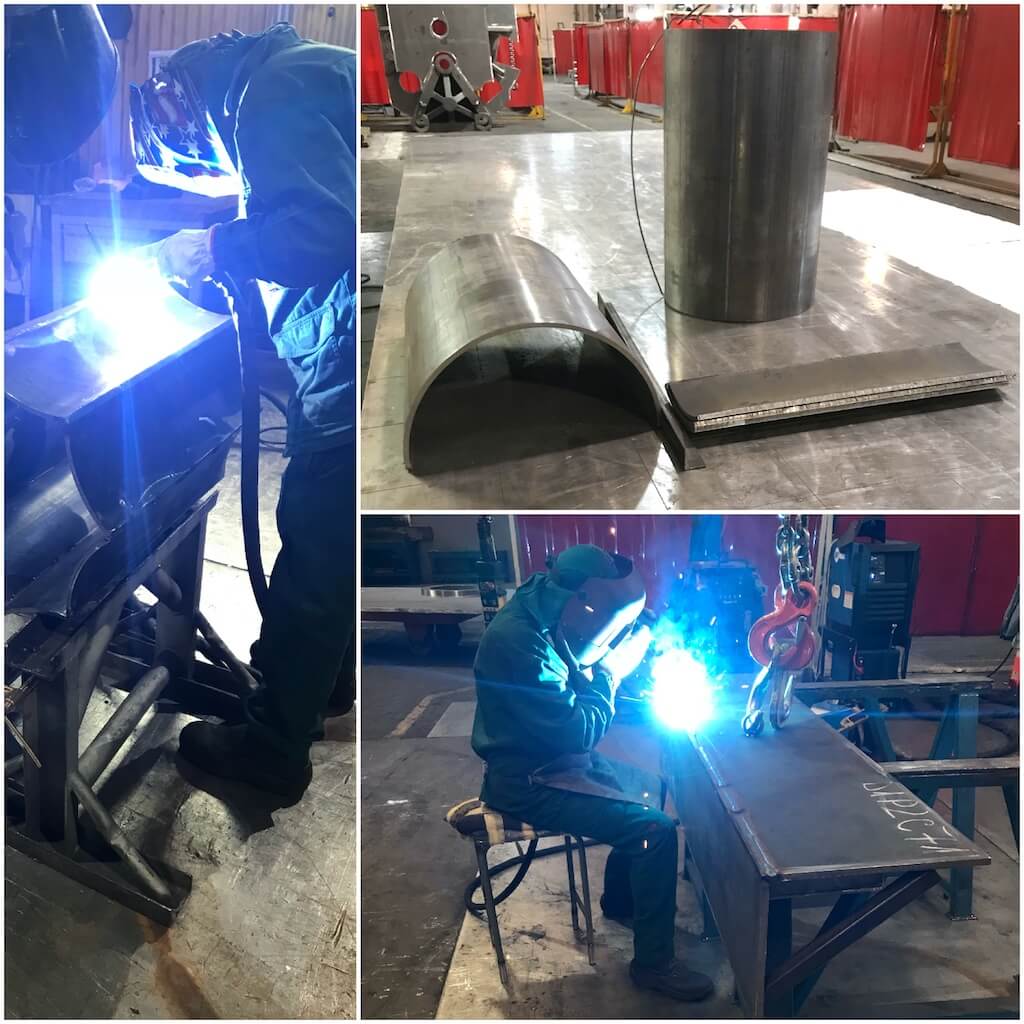 The architecture of the bench highlights the idea of surface and plates, basic elements of the metalworking. The grid, the result of 26 hours of machining, increases the perception of surfaces in space and the perspective effect. The weight of the steel is contrasted by the shape of the bench, which seems to be balanced on a single line of support. 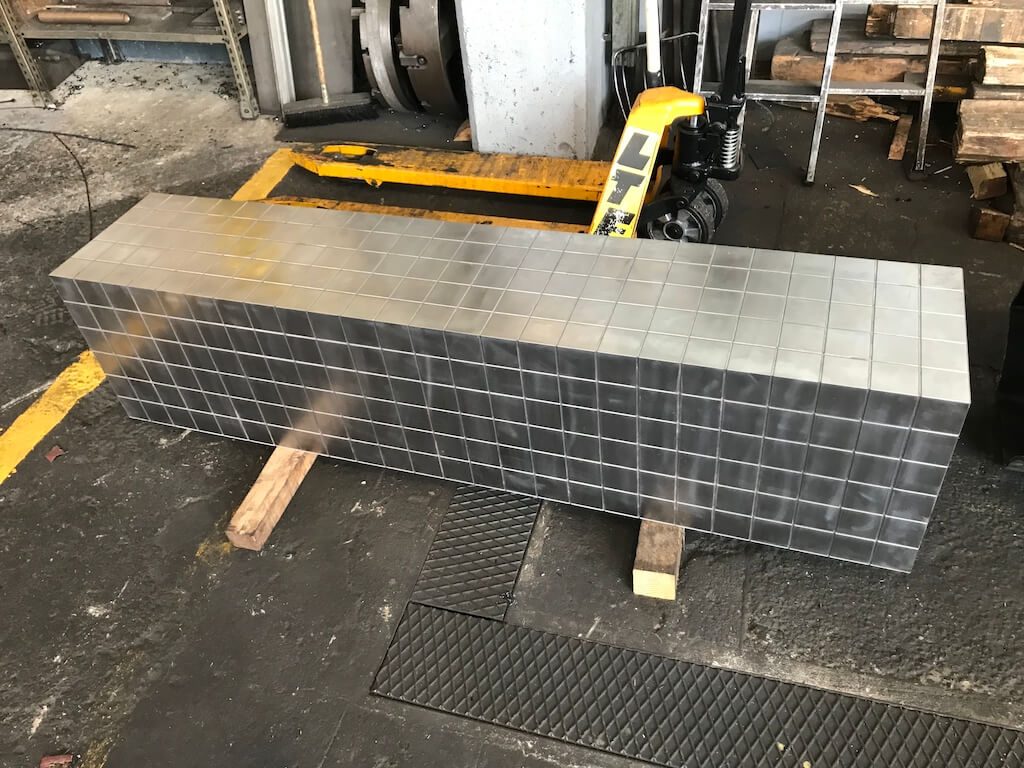 The table is inspired by the shapes and typical grooves of the Greek columns, as a symbol of solidity and a reference to the idea of eternity. The tabletop houses in its centre a mirror-polished steel disc, framed by a series of grooves inspired by the reverberation of the waves caused by a stone thrown into still water. The base of the table is made from two large steel pipes which are sectioned into 8 parts. The cuts are then turned over and re-welded together. The tabletop is machined on large vertical lathes. 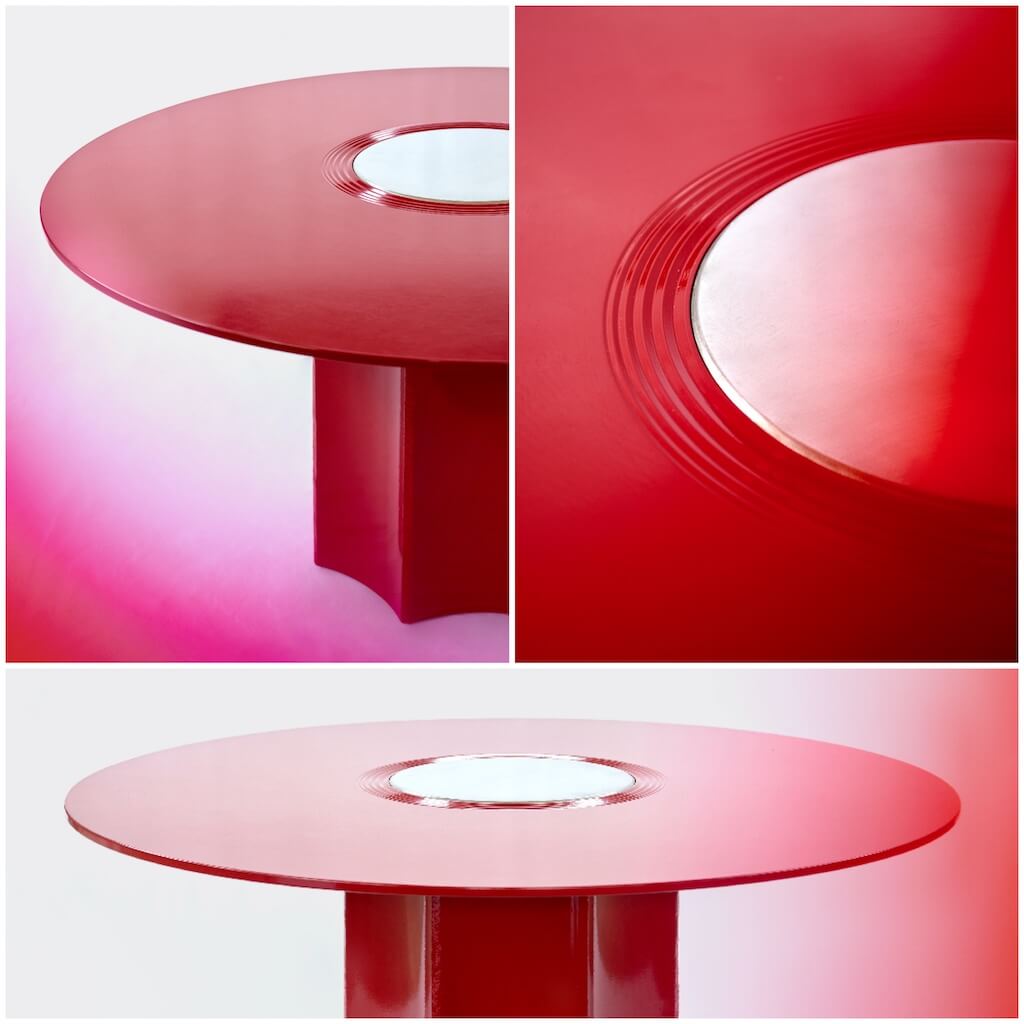 The shape of the hanger was born from the desire to visually reduce the volumes to a single line drawn in space. The result is a functional sculpture in a balance between strength and lightness. The apparent linear simplicity could never be obtained through the standard bending operations since such narrow radii would tend to deform the material. The hanger is created by plasma cut and TIG welding. 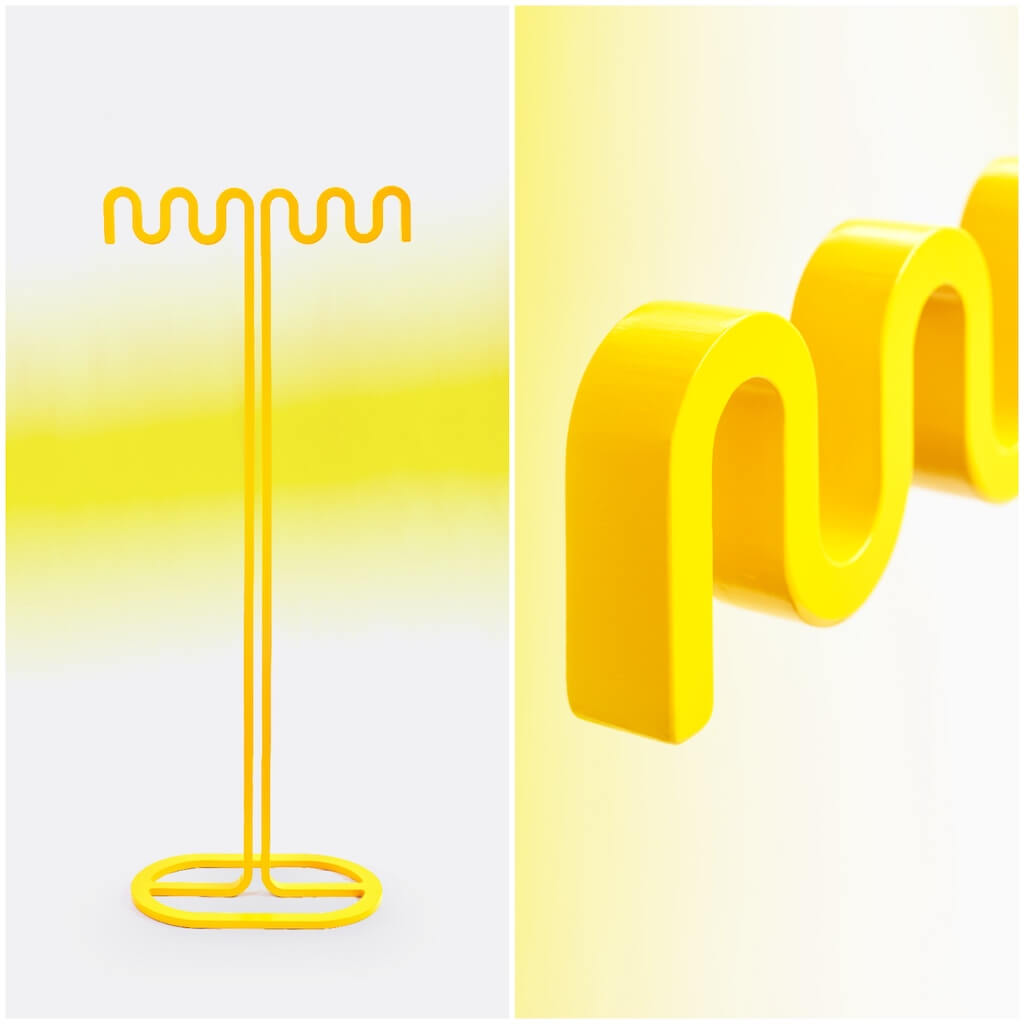 Lorenzo De Rosa and Ernesto Iadevaia are recognized among the most interesting emerging designers in the Italian scene. The solicitations of the street culture marry the stimuli of art and contemporary design are the synthesis of Sovrappensiero philosophy. Over the years they have proved that they know how to approach the project from different points of view: experimental research but also industrial production, the limited edition next with the art design world but also the small functional intuition, set-up design and interior design. Today they collaborate with different companies of Italian design such as Porada, Bialetti, Mamoli, Vibram, NAVA, Corraini, WayPoint and Manerba, as well as with the Polytechnic of Milan, the University of Bologna and NABA. 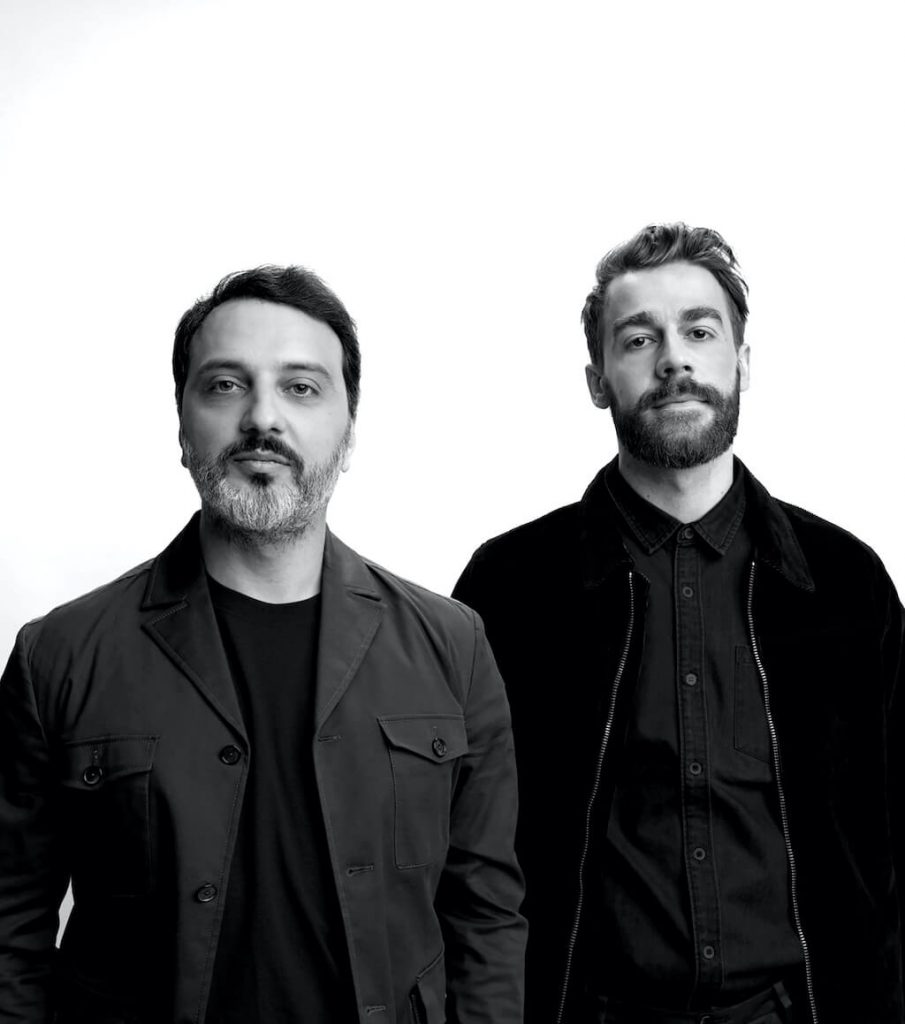