The international Design Parade festival was held in Toulon and in Hyères from June 28 to July 1st, 2018. The exhibitions will be open to the public until September 30. Created in 2006 by Jean-Pierre Blanc, the Design Parade festival Hyères aims to share with the public and the professionals the contemporary creation in the field of design. A major point, the competition presents ten young designers every year offering them a unique visibility and support.

The Villa Noailles organizes Design Parade in two events: the first in Toulon, for interior design, and the second at Hyères, for design. On the occasion of Design Parade Hyères, the villa Noailles launched a new project to support young designers and promote the knowledge of the Provence-Alpes-Côte d’Azur region. The year after her personal exhibition at the villa Noailles (second year after the Prize) the laureate of the Grand Prix of the jury gets the possibility to make a 1-year residency at one of the enterprises selected in the region: Olivades (fabric printer), Poterie Ravel (pottery, tableware), Salernes (terracotta), Aiguines (wood turner), Var cork, Biot (glass blowers), François Passolunghi (rattan). The first laureate to benefit of the new grant is Pernelle Poyet, during the year 2018. The second is Carolien Niebling in 2019.

GRAND PRIX DESIGN PARADE HYÈRES to UVA designed by Sara de Campos, born in Portugal in 1989 and graduated in 2017 from ECAL – University of Art and Design Lausanne. Coming from a family of winegrowers, this designer has often observed and taken part in grape harvests. She has put her knowledge to use in order to perfect the preservation of grapes, an essential element in the production of wine. Indeed, the careful handling and conservation of the grapes avoid their oxidisation, limiting the need for chemical products. She has also noticed the lack of ergonomics in the accessories worn by the pickers. From these observations arise a basket for small harvests and a crate for more intensive use. The crates are produced out of high-density polyethene which grants strength. The sides and the bottom allow for a reduction in the plastic used and make it more lightweight. It is easy to carry thanks to large handles. The small flared crates can be nested when they are empty or stacked perpendicularly thanks to notches on their bases. Thus, the grapes are always ventilated and spread out in small quantities in order to avoid being squashed. The basket answers the same problems but on a larger scale. It can be slotted into an aluminium tubular structure that is worn thanks to a nylon fabric rucksack. Thus, the grape picker’s back is protected and the large straps over their shoulders and around their waist provide them with greater comfort. To unload the harvest, all that is required is to place the basket upon a lorry’s flatbed and to slip on a new basket without undoing the straps. 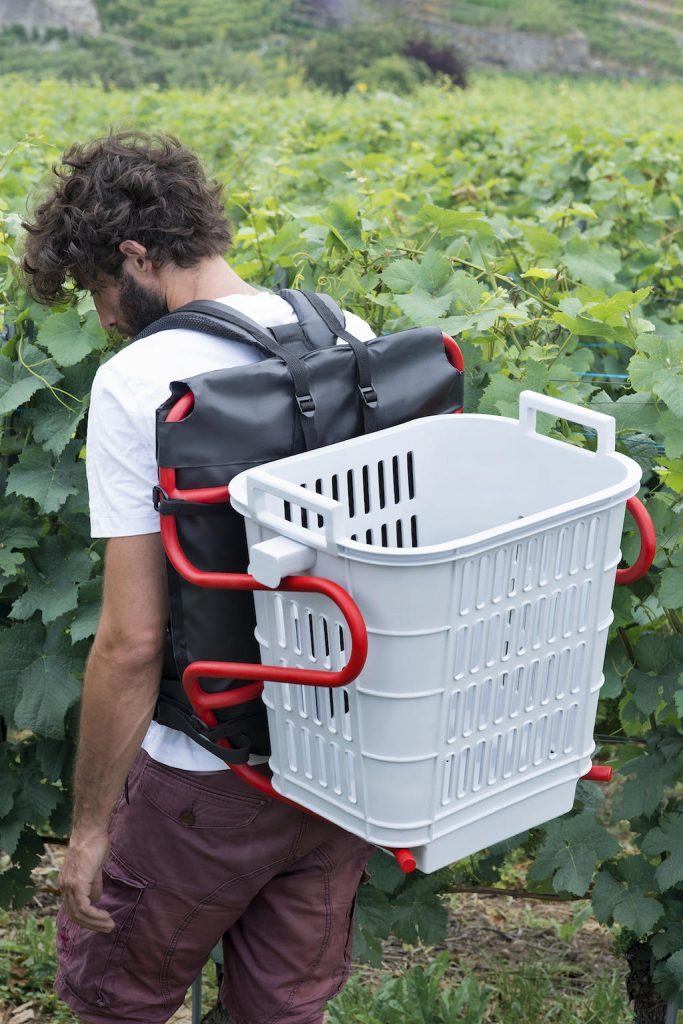 JURY SPECIAL MENTION to Alex Sizemore (born in 1995, lives and works in Cincinnati) and Hank Beyer (born in 1994, lives and works in San Francisco) graduated from the University of Cincinnati USA in April of 2018. Through a process which is both philosophical and sociological, this duo of designers undertook a trip in the north of the United States on a search for local materials and artisans, industries where craftsmanship has developed around local materials and regional traditions. They travelled through Ohio, Kentucky, Michigan, and New York state for a year. This rite of passage encouraged them to question their responsibilities as designers confronted with the standardisation of mass-produced products, along with the idea according to which a good material for industry, is a good material for humanity. Through this surprising series, they celebrate values which cannot be quantified: the wealth of human experience and the emotional charge which exudes from the artefact. The computer (with its screen, keyboard, and mouse) is retained as one of the most representative archetypes of the standardisation of products. Assimilated by everyone, it is the perfect example of challenging passive automatisms and questioning the relationship between an object and its conception. With humour and sometimes irony, these two designers offer variations inspired by their journey: in clay, charcoal, ice, lard, calcium, peat, beeswax, green plants and stoneware. 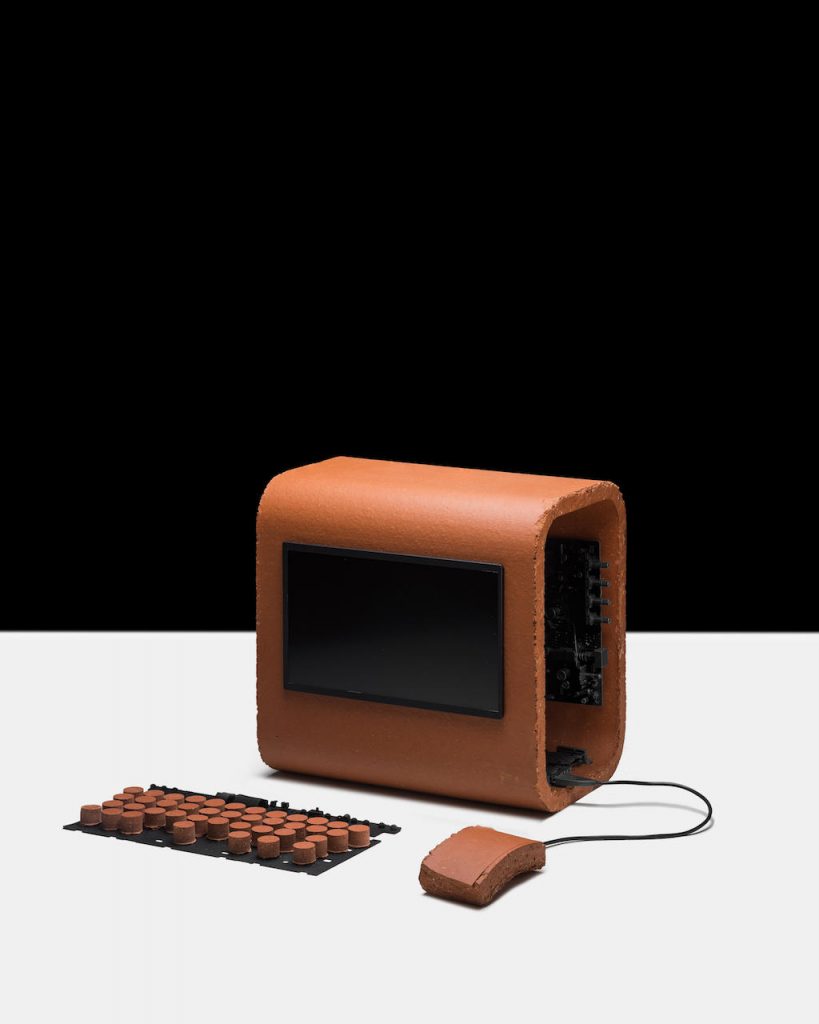 EYES ON TALENTS X FRAME magazine – SPECIAL MENTION to BONE by Loïc Bard born in 1978 in France and graduated of the École d’ébénisterie d’art in Montréal, where he lives and works. This collection consists of benches, stools, and chairs made of solid maple wood which has either been blackened or whitened. The radicality of these two chosen tones is tempered through the veined details of the natural material and the sensual anatomy of this furniture, which one might think is sculpted from a single piece of wood. There are no bones jutting out of the legs of the seats whose connections disappear as if they were subsumed by an imperceptible material. This designer has erased any angle which might snag either an eye or a hand, he thus wishes to awaken the tactile senses of his end users. We are surprised to discover these objects through touch, taming them before sitting down and becoming one. The analogy with the human body can be felt as soon as these silhouettes are perceived, outlined by a compact skeletal structure in the case of the chairs, an assembly of rounded scapulae for the stools, or through large limbs with soft knee joints for the benches. This designer’s work is particularly suitable for the visually impaired, in order to provide them with the comfort of an object which does not affront, but instead asks to be caressed. Loïc Bard aspires to create objects that, upon interaction, invite us to connect with the real, with the instant, and to live and feel. 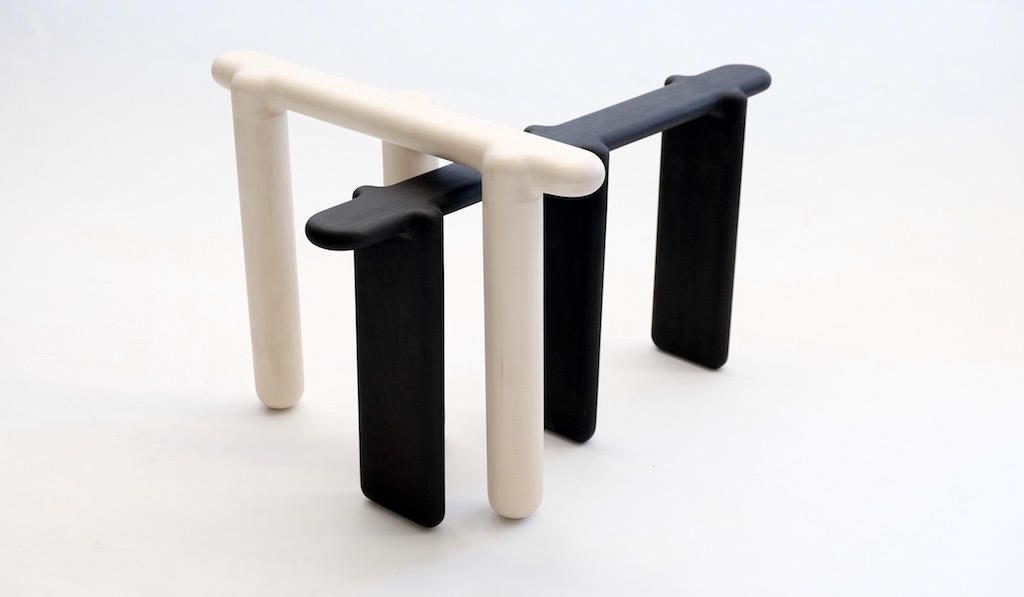 PUBLIC PRIZE CITY OF HYÈRES to Camille Viallet & Théo Leclercq for LA CITÉ. Born respectively in 1992 and 1991, Camille Viallet and Théo Leclercq have established themselves in Paris since they graduate from the École supérieure d’art et de design in Reims. This duo interrogates the role of the designer in an urban context and aims to consider “shared materials” with the same freedom generally offered to furniture destined for private use. Their bench features like a fundamental object within a public space, becoming their field of research: “Sitting on a bench is to undergo the shared and simultaneous experience of a design, a question of sharing the same material support.” A few initial remarks are required; a communal seat defines a location and incurs a duration, it inscribes itself within a landscape, it unites and directs the gaze. Their research has encouraged them to investigate comfort, reception, conviviality and the robustness adapted for a collective usage. Cultivated through forty or so different models and various designs, their experimentations have today taken form in the creation of an Exedra. This bench unites all of the characteristics previously listed. Its yellow colour signals it out, its semi-circular shape gathers together as it invites passers-by to make a detour in their paths. The birch seat is supported by eight legs constructed from lacquered steel and aluminium, each crowned with an ergonomic back. This multiplicity symbolises the association of individualities in order to maintain a communal foundation. A further central support rises up in order to receive a clock. The designers thus proffer a reinstatement of a traditional meeting place, for the duration of a pause.