The exhibition Círculo Sagrado -opened on June the 2nd at RocioSantaCruz gallery in Barcelona- reflects, at the same time, the transformation that has taken place in Catalan artist Sixe Paredes‘s artistic language, as well as the different supports that his works have adopted. Despite his international career, Sixe Paredes has not exhibited in Barcelona since 2011. It has been a piece of luck and a great joy to have met with him and his works at the gallery.

“Criticism of the structures of the monocultural nation-states and of neoliberal capitalism, largely led by indigenous movements and other popular forces, are a manifestation of social discontent and a challenge not only to the social, economic and environmental effects of the neoliberal model but also the political system as a whole. It is clear this isn’t working and a paradigm shift is urgent. It’s now or never.” stated Laura García-Borreguero Gómez, an anthropologist who has followed and written about his work on numerous occasions. 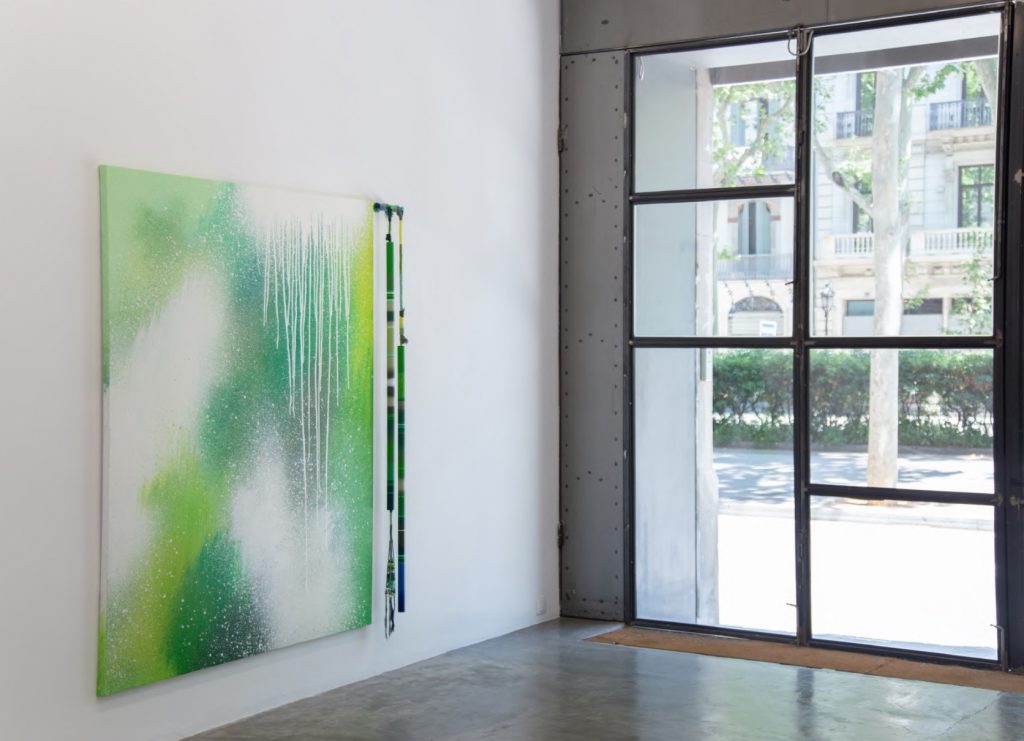 Acutely aware of this very serious problem, which concerns and affects everyone, and from an ethical obligation as an artist to join a call for life on Earth, Sixe Paredes, created these artworks for the present exhibition opened until September the 10th. In addition, his work has always been intimately linked to Nature and to ancestral and indigenous cultures that advocate respectful ways of life with the beings that surround them, guarding a harmonious balance, maintaining the sacred circle that is our mother Earth, generator of all the life forms that exist on our planet.

To draw parallels with the great magnitude that this problem should occupy in our minds, the artist works with large-format paintings, to point out and highlight this idea. Also, in a manner different to his previous works, he uses a monochromatic range. His works, known for years for a bright and varied colour palette, are limited in the exhibition to shades of green and blue, which speak of the hydrosphere and the biosphere, the elements damaged by pollution and climate change. In the words of Sixe, ‘These two colours, green and blue, in my worldview represent heaven and earth, nature and the universe, awareness and respect’. 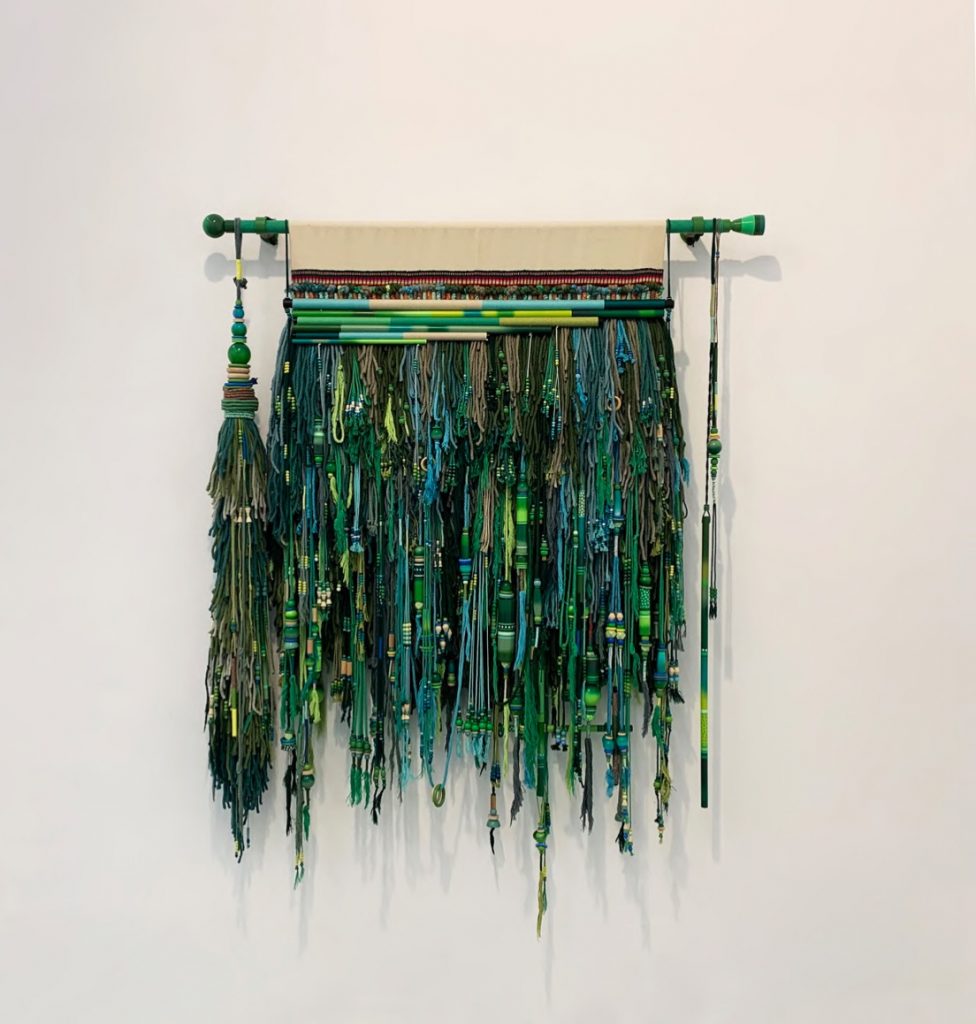 The works shown at this exhibition were presented for the first time, at the end of 2019, at the CEART, Tomás y Valiente Art Center in Fuenlabrada. Círculo Sagrado is articulated from different styles, ranging from the purest Pictorial Abstraction, with which it winks with blurred and liquid blows that drain, to its origins in street painting. Simultaneously, he dialogues with other languages in which the shape is made and unmade, accompanying canvases with pieces made with assemblies of various materials: wools and cords, beads and bars of painted wood. And it goes as far as the transmutation in the use of the same symbolic elements, which he explores with other artistic supports, such as video art or the use of hand-woven by him textiles, which follow ancient traditions of Mesoamerican origin, the result of his artistic experience in Peru. 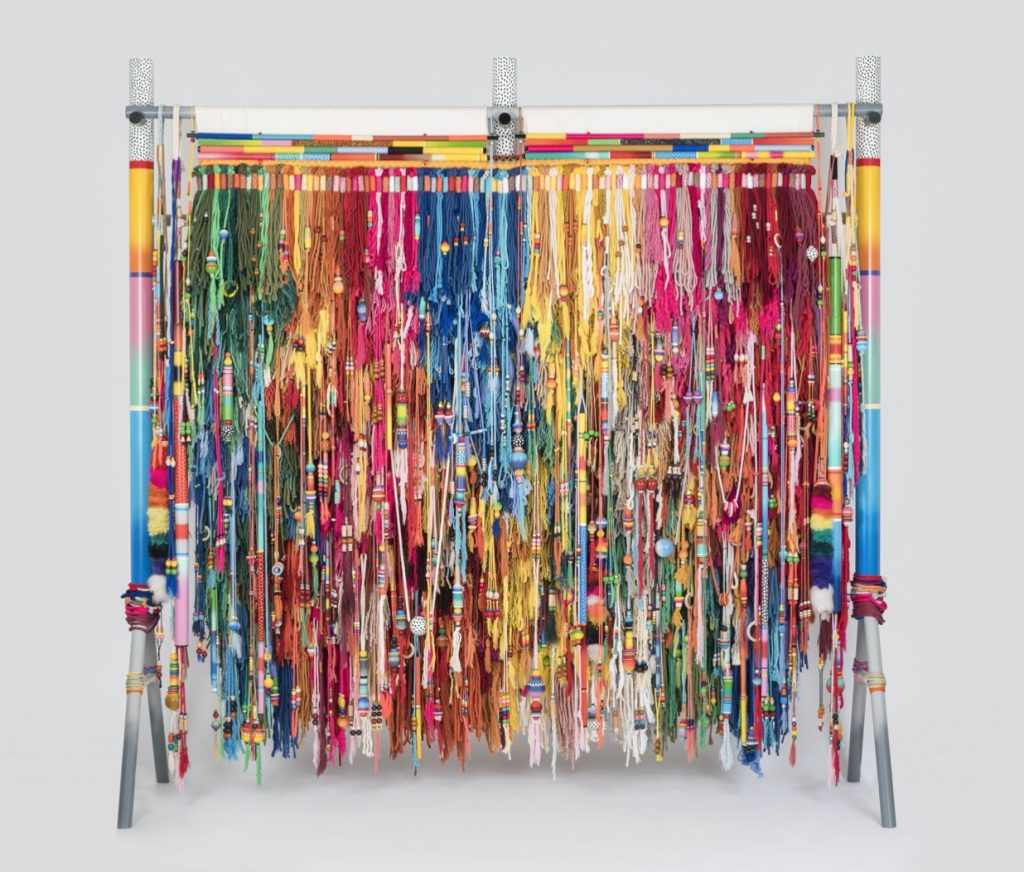 A superposition of elements with a continuity solution, that we could call Expanded Painting. As Sixe points out: “Today, in the world we live in, we are drowned in predigested images that invite no reflection at all. On the contrary, they leave us mentally numb, lead us to stop thinking, and cause us to forget to use our innate imagination, our creative mind.” 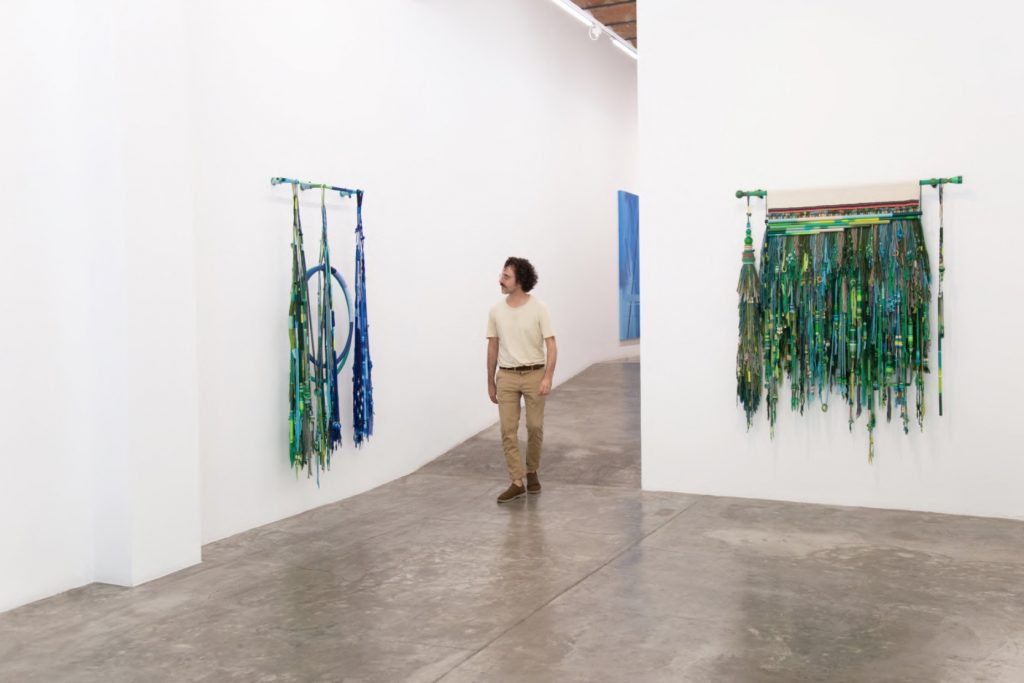 Laura García-Borreguero finishes: “Sixe -in the pieces selected for this exhibition- invites us to reflect, to think creatively and not slavishly, reviving our most ancestral consciousness, now dormant but engraved deeply within us. Because in a world that applauds individualism, the artist reminds us of what unites and connects us, what we all share and hold in common.” 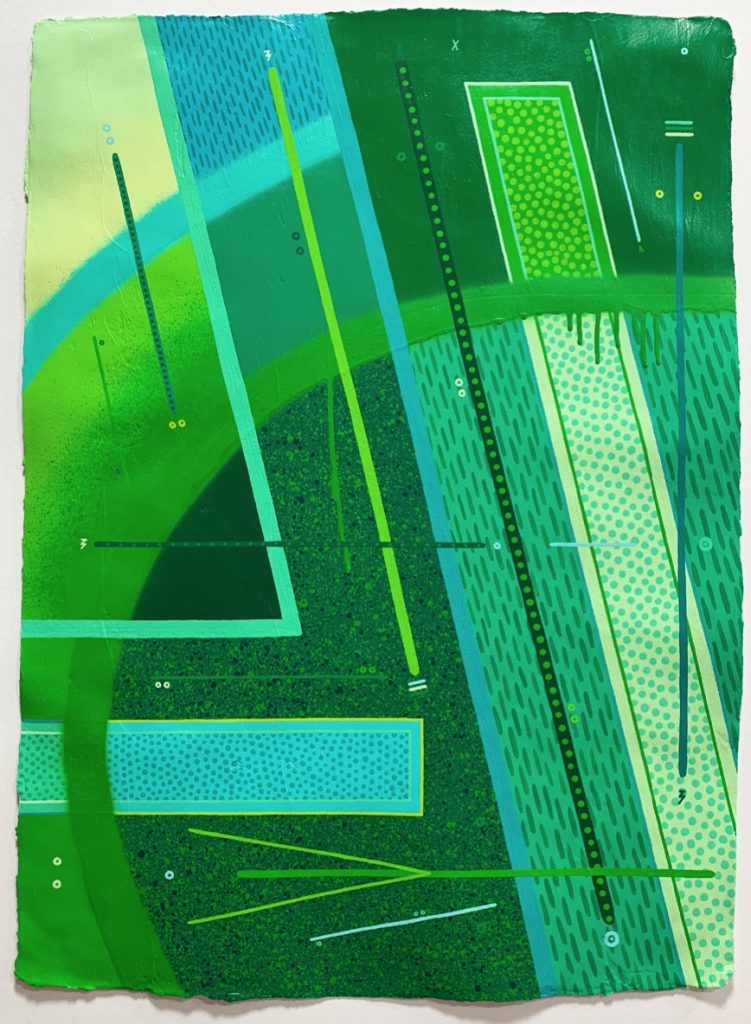 From the late 80s, Sixe Paredes -born in Badalona in 1975- has developed his artistic practice through street painting on the walls of Barcelona. It is from the following decade that he began his studio work, creating his characters on canvas and sculpture. His first canvases date from 1998.

This transition from outdoors to the exhibition space has a great success, also keeping the vitality of the streets and the exteriors alive.

Laura García-Borreguero Gómez affirms: “Sixe Paredes is as a self-taught artist who has learned through his own means, investigations, and practices during a career spanning over twenty-five years. Sixe Paredes generates, from a very personal figurative, a whole bestiary between the animal and the humanoid, reaching the Abstract Figurative and developing a whole language of elements and symbols, many of which have accompanied and have been transmuted over time.”

In 2008, he was one of six artists invited by London’s Tate Modern to paint its main facade for the first time. Since then, he has had exhibitions worldwide in Paris, Brussels, London, Pekin, Mexico, United States, Madrid and Montreal.
Since 2009, Sixe spent long periods of time in Peru to deepen his knowledge of Peruvian and Andean art and culture. He achieved this goal by collaborating with creative communities in the area, learning the local traditions and techniques of potters, textile artisans, chicha designers and musicians.

In 2014, he returned to London for a residency followed by an exhibition at the Somerset House arts centre. Rafael Schacter, curator of the Street Art at Tate Modern exhibition, wrote about the exhibition “Futurismo Ancestral”: “It is an offering to Peruvian and Andean aesthetics. The South American country is somewhere Sixe feels at home, at ease with its ‘vital rhythm, whit its simplicity’. It is a place that opened his ‘heart and eyes to new interior dimensions’. It is also a place where he could ‘paint in many places without problems”, reminiscent of how his beloved hometown of Barcelona used to be in the late 80s.