During the Milano Design Week 2019 architect Tiziano Vudafieri presented the Wilhelm Lamp as part of the Rossana Orlandi exhibition “Guiltlessplastic – Master’s Pieces”. The one-of-a-kind piece, 3D printed in recycled polycarbonate, represents a new interpretation of a vase by the German designer Wilhelm Wagenfeld, a teacher at the Bauhaus and undisputed master of modernist design, of whom Vudafieri is a collector.

The lamp was presented in the scenic backdrop of Railway Pavilion of the Museo Scienza e Tecnologia Leonardo da Vinci in Milan among one-of-a-kind pieces in recycled and recyclable plastic made by world-renowned artists, designers and architects. 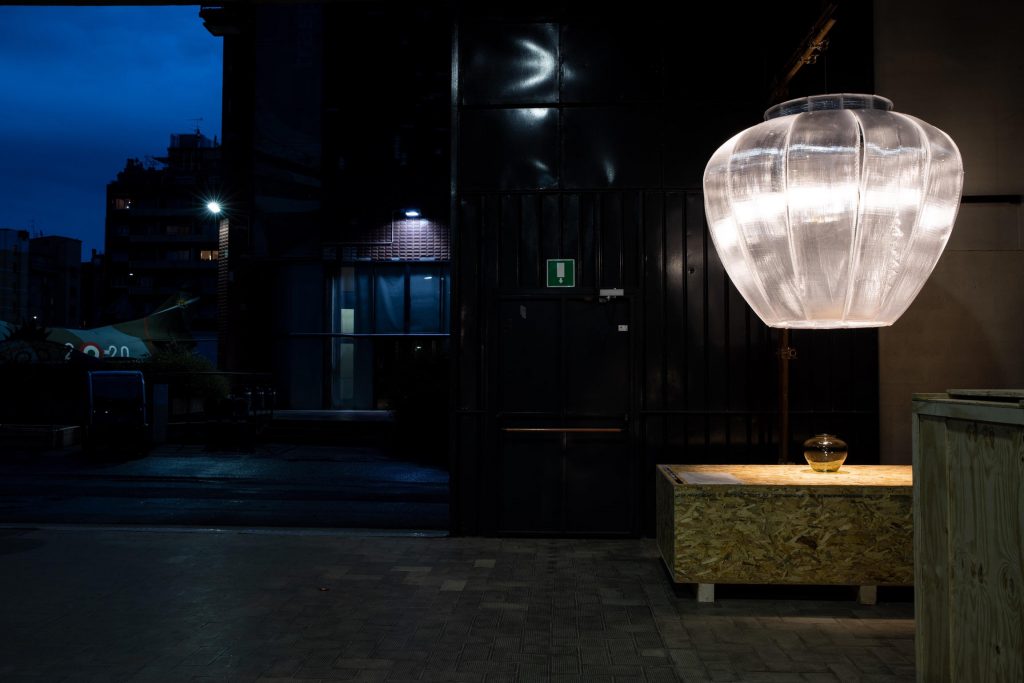 The Wilhelm Lamp was born out of Tiziano Vudafieri’s passion for the German designer: “Wilhelm Wagenfeld was the only Bauhaus master to apply this movement’s utopia to real life, invading the market after World War II with beautiful everyday objects with innovative designs and affordable prices. In the ’20s and ’30s, he was a great innovator of industrial techniques, especially glass, being among the first to use the freshly invented blow-blow technique and the first ever to use borosilicate glass for domestic use. His pieces are part of, for example, the permanent collection of Moma, but Wagenfeld remains inexplicably a master known above all in the German world. Among his works, I prefer his glass pieces, particularly the vases, with their classic and rigorous, elegant and modern forms. Hence the idea of recycling not only the materials used for the object but also the design itself, fitting in perfectly with the Guiltless Plastic theme,” explains Tiziano Vudafieri.

The architect thus started out from a Wagenfeld glass vase of 1935 and transformed it into an imposing, man-sized pendant lamp. During the exhibition, the lamp illuminated the original vase – part of Tiziano Vudafieri’s personal collection – to highlight the relationship between inspiration and work. 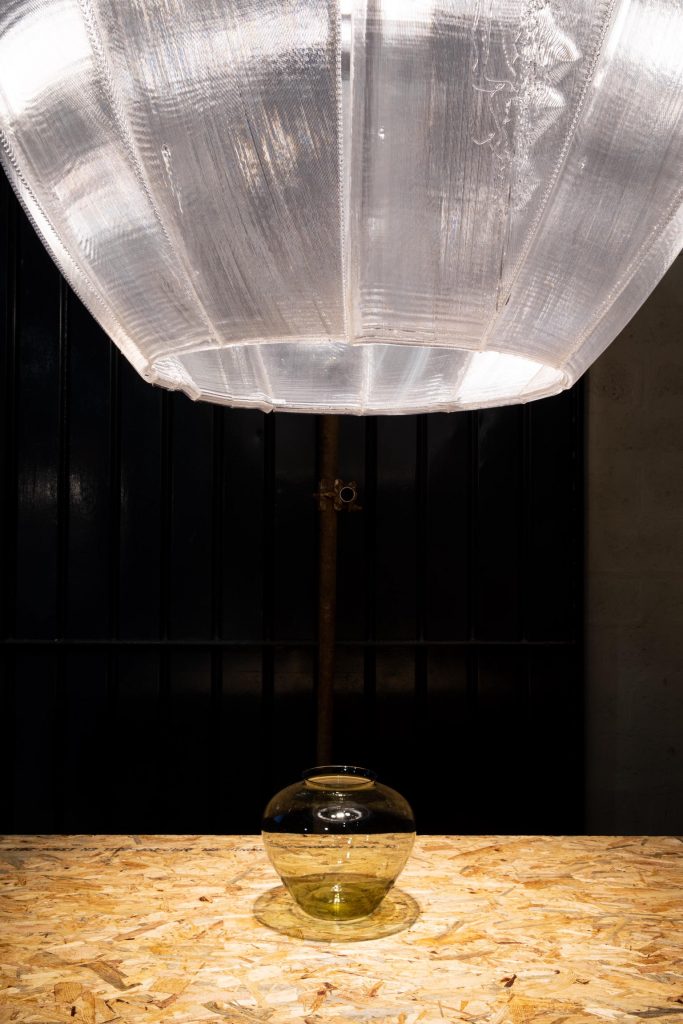 Recycled polycarbonate was chosen for the Wilhelm Lamp. The high thermal and mechanical resistance of this transparent recyclable plastic, with at the same time the right fluidity in the molten state to allow printing through 3D technology, made it ideal for the creation of an imposing object. Recycled polycarbonate responds to the important need to guarantee a second use to consumer products that have reached the end of their life cycle: available in large quantities, polycarbonate is ground, melted and reprocessed according to a type of recycling defined as “mechanical”. 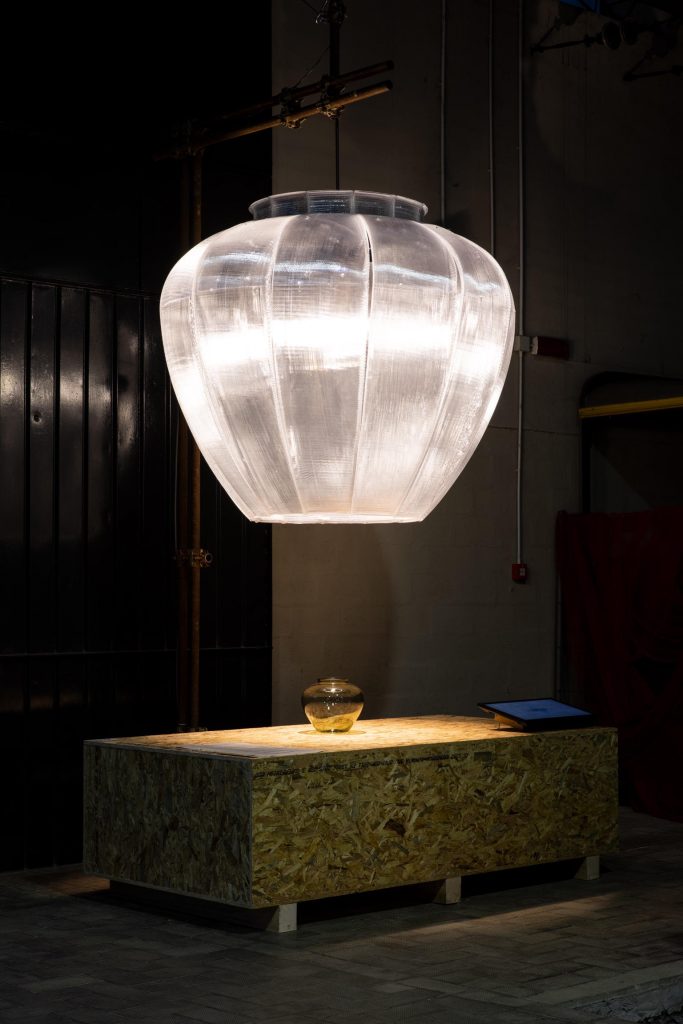 Vudafieri selected a top quality group of partners and consultants, from BAOLAB – an agency specialising in colours-materials-finishes trends – for selection of the most suitable materials and techniques, to LATI – manufacturer of thermoplastic compounds for technical applications – which made its know-how available and supplied the material, and GIMAC. Deploying one of the largest 3D printers on the market, Gimac has developed a printing technique that starts directly from the plastic granules, skipping the phase of the transformation into the wire and consequently consuming less energy.

Tiziano Vudafieri was born in Castelfranco Veneto in 1958. He obtained his degree in Architecture in 1985 at the University of Venice. From 1986 to 1994 he worked in Milan as project leader, consultant and partner of important International Studies such as Sottssas Associati and Studio Cibic & Partners, collaborating on many architectures and design projects in Europe and the United States. In late 1994 he founded his own company, Studio Vudafieri, and in 2000 with Claudio Saverino the Studio Vudafieri-Saverino Partners. True to the Milanese tradition of the “creative studio”, its work field spreads from architecture to retail design, to interior design and decoration. Vudafieri-Saverino Partners, based in Milan and Shanghai, in recent years, has worked throughout Europe, in the United States, China, Japan, Asia, the Middle East, Russia, and Eastern Europe.