Scuderia 65 was developed for a very experienced owner and regatta sailor who had various offshore yachts before and who is taking and has been taken part in numerous offshore and grand Prix regattas before. Furthermore, he was since his youth and is still competing in dinghies – Finn, 49er and small keelboats Melges 24 etc. 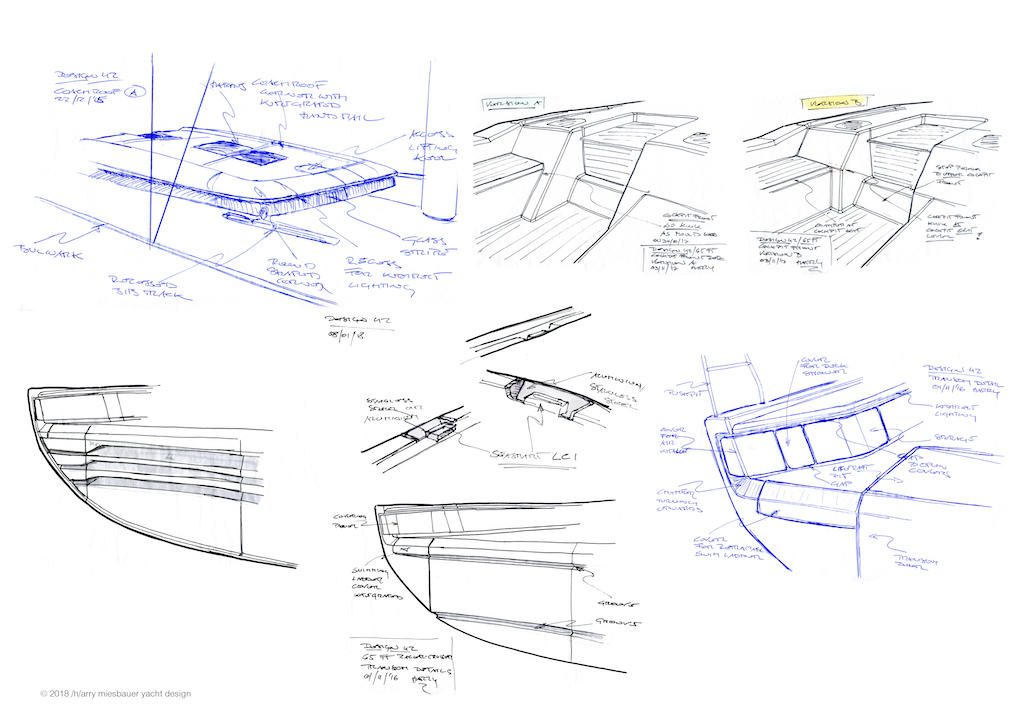 All started on a night watch during a middle sea race on his previous 62 footers when the owner and the boat captain were philosophising about the needs and requirements of a new boat. It took not long and they pinned out the key points they wanted for a new boat:

For deciding the interior layout all four, the owner, his wife, the boat captain and the designer, were closed up in the owner’s old boat, on anchor, in a bay close to Porto Cervo (Sardinia). It took four days of measuring, trying this and that, checking heights and passages, drawing heaps of hand sketches, modifying the layout on tracing paper backwards and forwards until we had the final solution. Otherwise, the owner would not let anybody from the board. 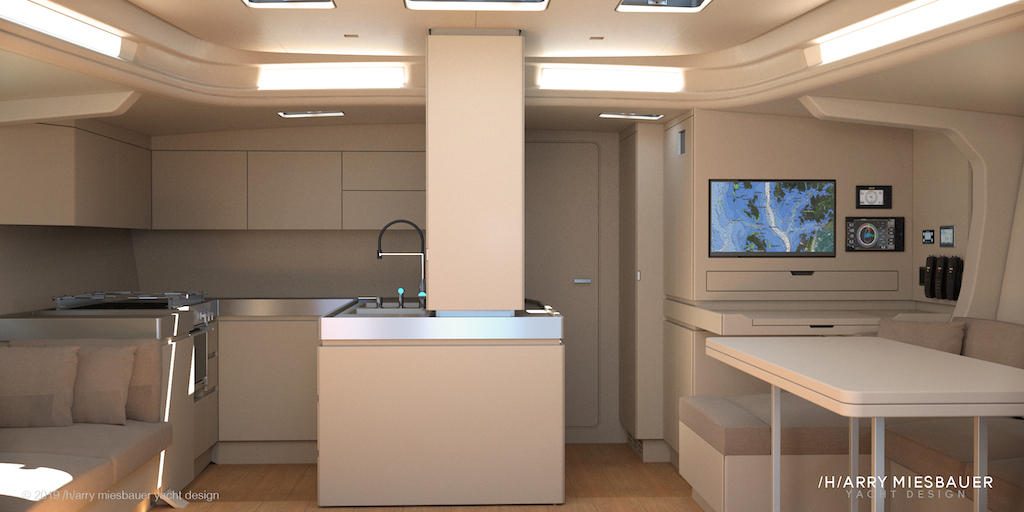 Close collaboration with the owner and his boat captain Aldo Scuderi and especially their involvement in all aspects of the design and construction, were key to get a really tailor-made yacht “I didn’t want to design just an eye-catcher with the year stamped onto it. it should be also an “eye-pleaser” with elegant lines, which still has a fresh look in ten years“ stated Harry Miesbauer. 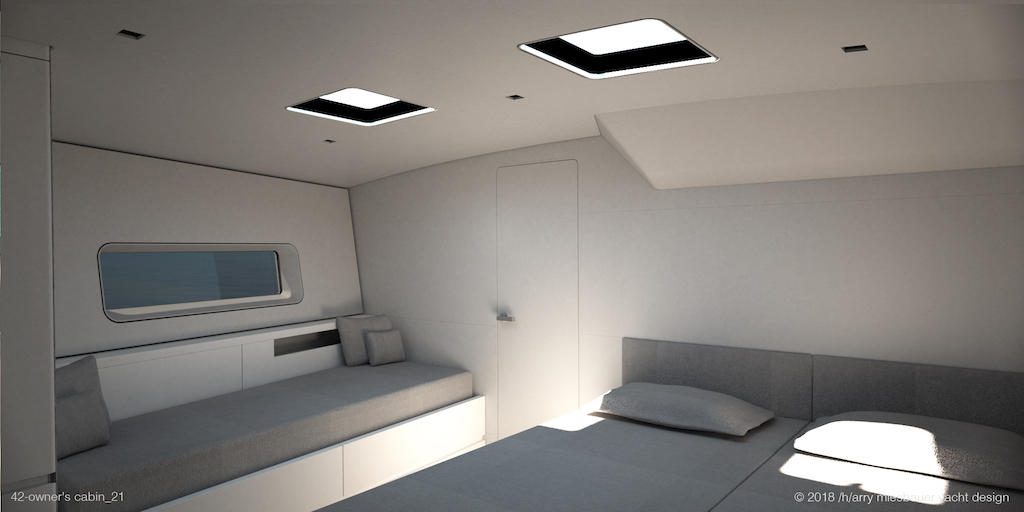 HYMD is a yacht design studio in the “classical” sense. They can provide the full package of yacht design, from the naval architecture, naval & structural engineering up to the exterior and interior styling. They have also a vast project management record. On some projects HYMD team up with an experienced partner, when it comes to developing or strengthen a brand. Many words can describe how they work and on the other hand they don’t you can call it passion, call it, the love for the details maybe it is the eternal search for the purity of the shape and the proportions which drive us most at the end it is just they love what they do.

Very powerful hull lines with high form stability optimised for IRC. an extensive CFD analysis has been carried out by the specialist Alberto Porto, who has a vast experience in America’s Cup and Volvo Ocean race boats and with whom I work together now nearly 20 years. IRC optimisation has been done together with Matteo Polli. 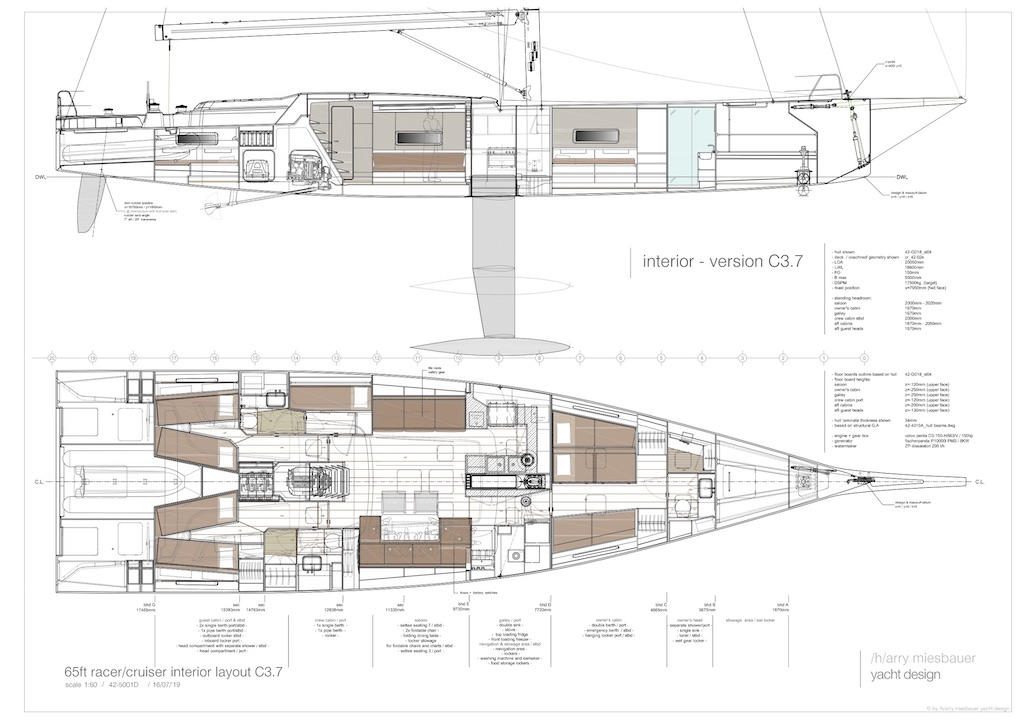 Harry Miesbauer was born 1966, sailing since the age of 6, and he is an avid regatta sailor in dinghies and big boats. After a mechanical engineering diploma in Austria he did the highly regarded Yacht and Powercraft Design course in Southampton, graduating in 1998. Right after graduating he worked at the studio of Luca Brenta / Milano for 3 years as a senior yacht designer and between 2004 to 2007 another 3 years as a lead yacht designer and responsible for regatta projects. In the second period he was also one of the Luca Brenta’s partners highlights of this collaboration: Kenora wally 105 , Wally B , Chrisco CNB 100, TP52 C-quadrat , B-yachts B-60 , B-30, B-38 , Nautor 76 etc. Between 2000- 2004 he worked as a lead designer with Mani Frers at the German Frers office in Milano. In this period he was a member of the design team of the Swedish Victory Challange Americas Cup team and member of the Volvo Ocean Race design team of Amers Sports One (VOR 60). During this time he was also involved in various IMS race boats

Adria Sail paid huge attention to all details. The vast experience of the yard owner, Maurizio Testuzza, and his team has put an enormous effort to stay within the target weights and to achieve best quality composite. With their very high boat building skills, which they gained when building various wallys in the 2000 years, and various other custom yachts recently, they contributed a lot to find the best solutions in every area of the yacht.