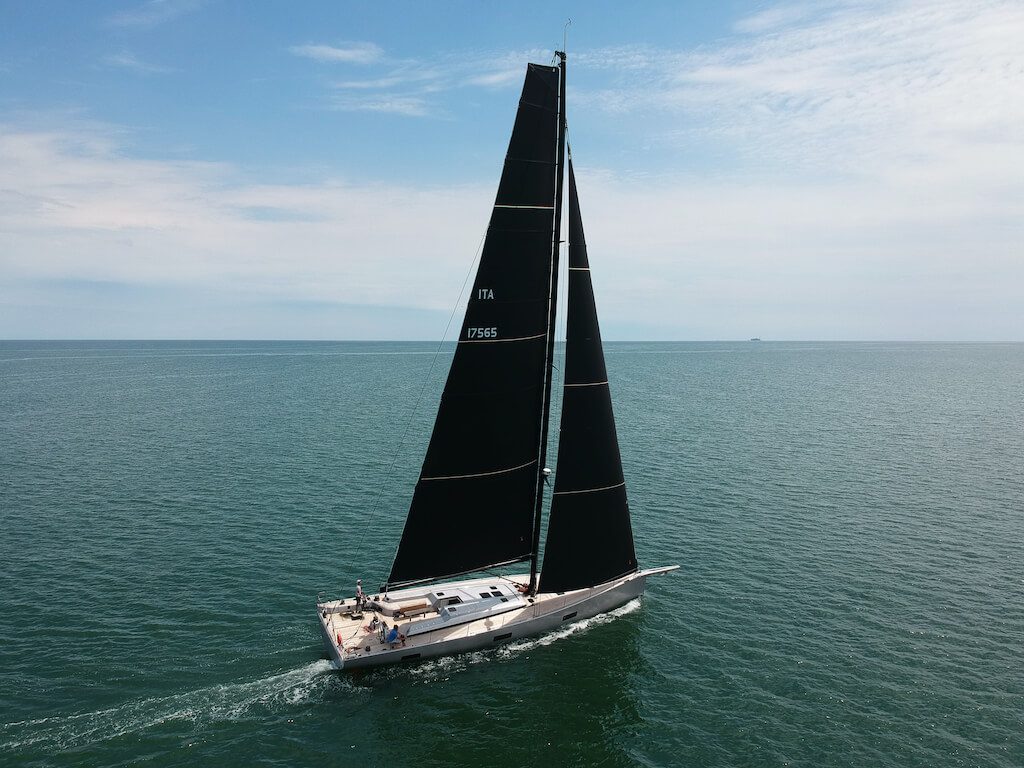 The Scuderia 65 designed by Harry Miesbauer built by boatyard Adria Sail (Fano, Italy) has carried out its first sea trials in the racing configuration.

Last weekend saw the first outing of the new 65ft fully IRC optimised full carbon racer/cruiser which was launched last autumn. due to the Covid-19 pandemic, the crew headed by OneSails CEO Dede De Luca had to wait quite a while before they could hoist the new 3rd generation OneSails 4T Forte racing sail set. 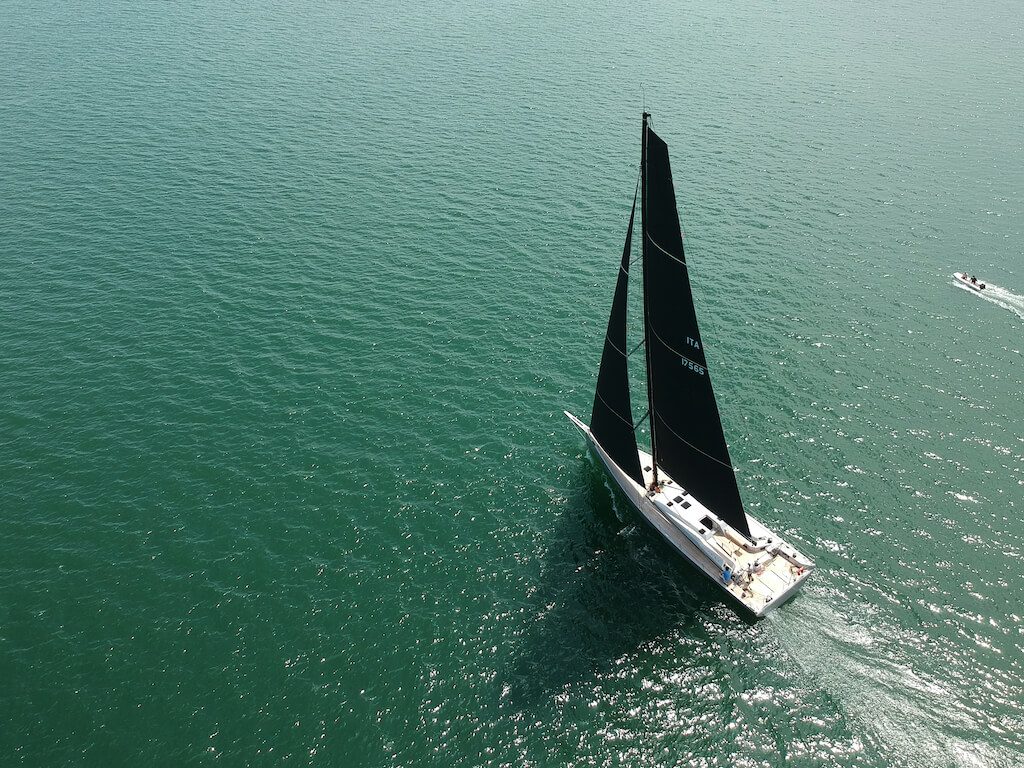 The full set of sails was produced at the OneSails Nord Est loft in Verona (Italy) where the sail design was done by Dede De Luca and Samuele Nicolettis in close collaboration with Harry Miesbauer to optimise the sail plan for long-distance races under IRC.

Although due to the Covid-19 pandemic, valid time testing the sails and boat on the water has been lost, the sail designers at the OneSails Verona loft could spend a few weeks more on optimising sail shapes in “lock-down”. 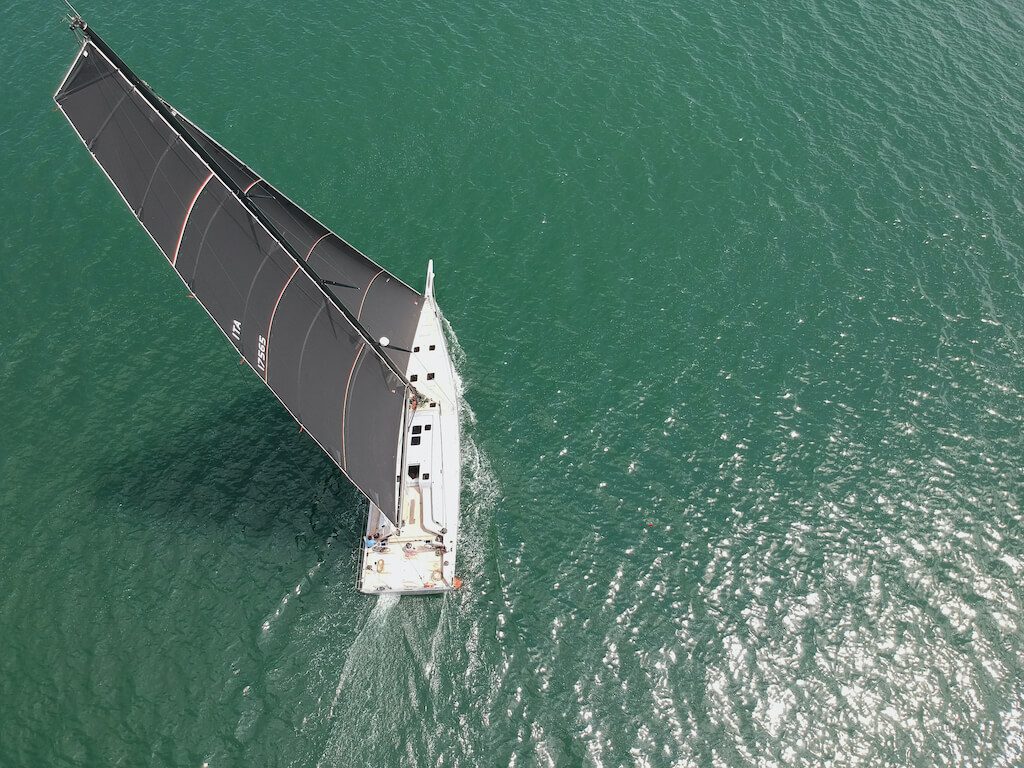 However, the first outing with the racing sails was very promising and showed that the boat has its potential as it was foreseen on paper. the boat had no technical issues at all. all systems worked very well, which means that the meticulous attention to details in the design and building period by the /h/arry miesbauer yacht design (hmyd) and the project manager Aldo Scuderi has paid off. It also shows that the yard, Adria Sail, and suppliers like Cariboni and Harken have done an excellent job. 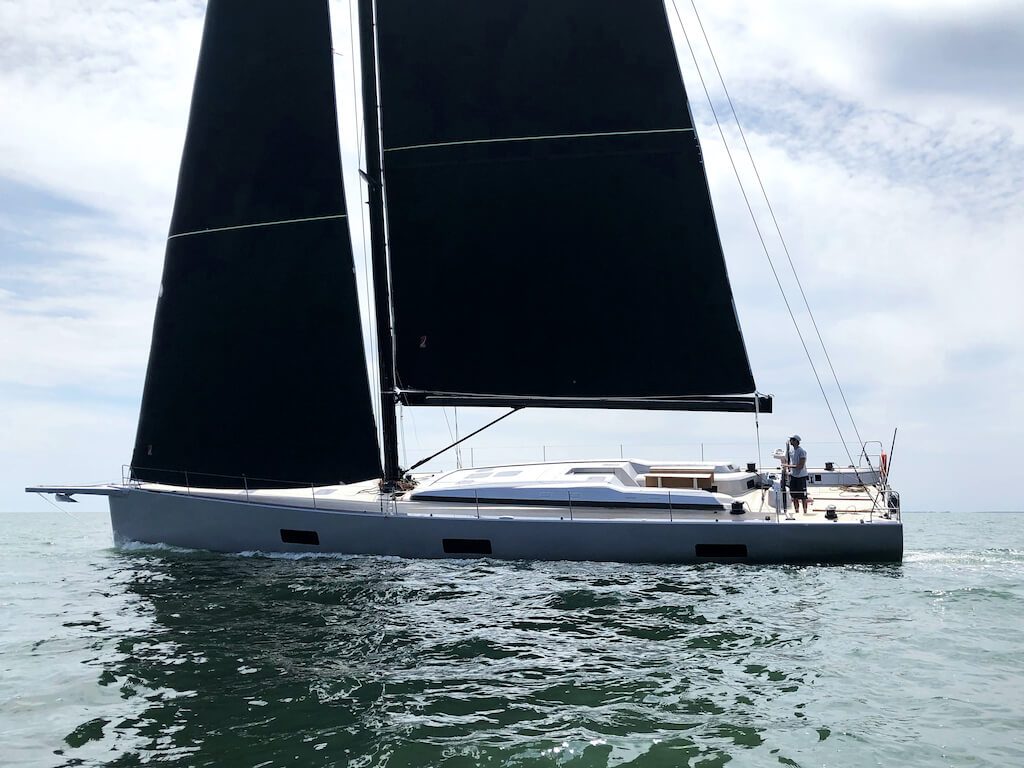 Unfortunately some of the regattas where the boat had planned to participate this season e.g the Aegean 600 have been already cancelled. the owner and the crew are just hoping, that there will not be any other cancellations. Right now, the first regattas for the boat are the Barcolana and the Middle Sea Race in October. 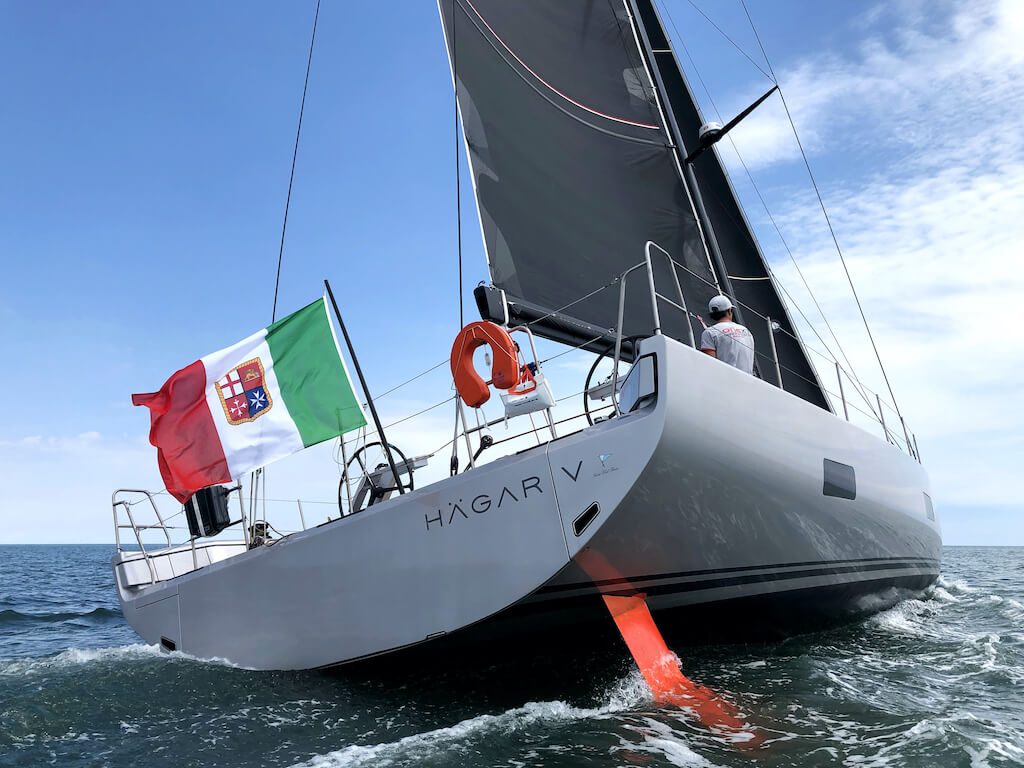 /h/arry miesbauer yacht design (hmyd) is a multi-disciplined, multilingual group of people who all sharing the same passion for sailing and yachts founded in spring/summer 2007 and is based in Como (Italy) and Vienna (Austria).

“We are a yacht design studio in the “classical” sense. We can provide the full package of yacht design, from the naval architecture, naval & structural engineering up to the exterior and interior styling. On some projects we team up with an experienced partner when it comes to develop or strengthen a brand.” says Harry Miesbauer. “Many words can describe how we work…. and on the other hand they don’t you can call it passion… call it, the love for the details… maybe it is the eternal search for the purity of the shape and the proportions which drive us most… at the end, it is just… we love what we do.” 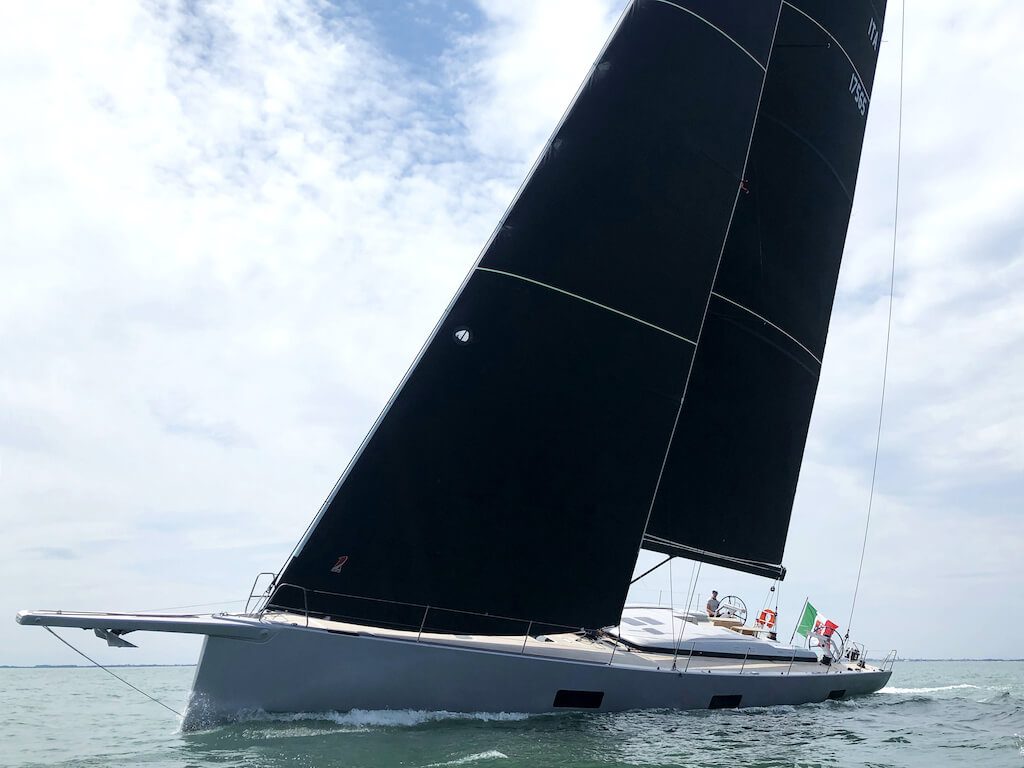 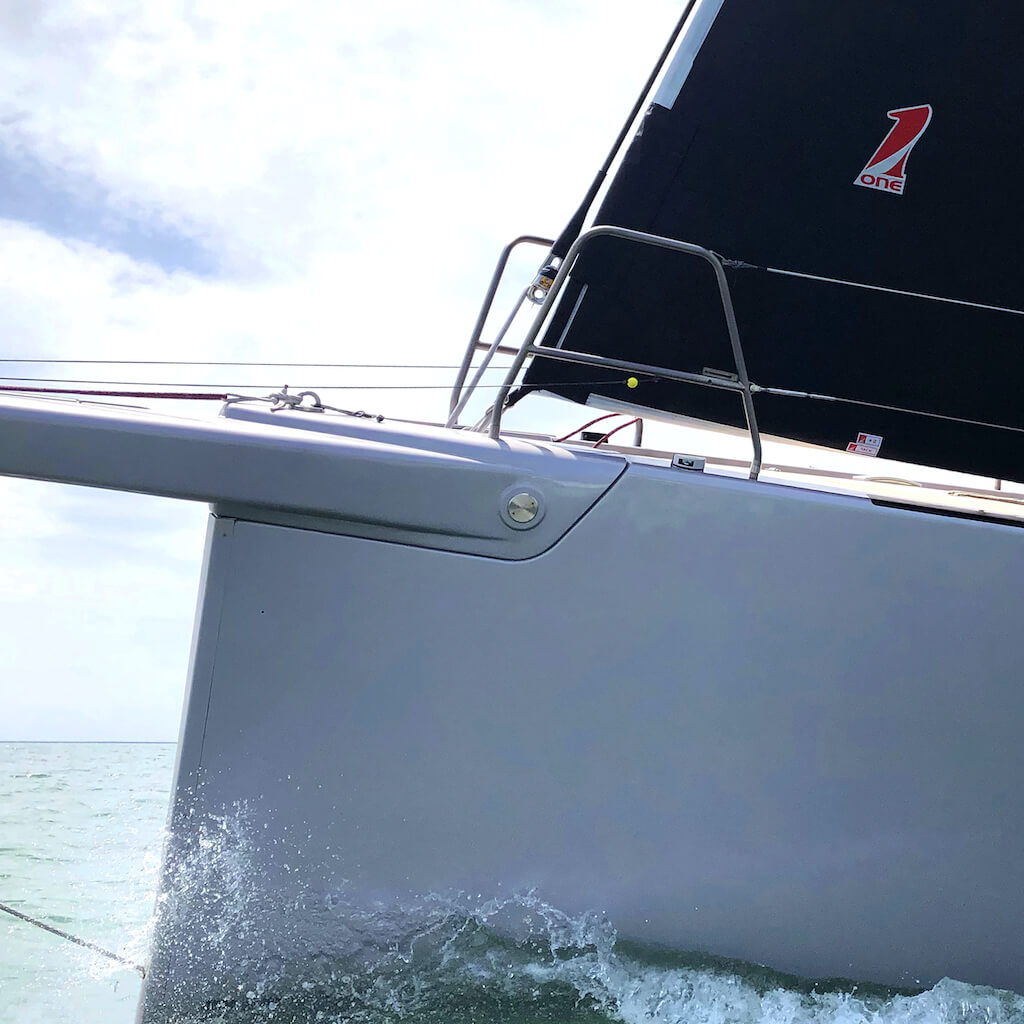 Harry Miesbauer, born 1966, sailing since the age of 6, and an avid regatta sailor in dinghies and big boats. After a mechanical engineering diploma in Austria he did the highly regarded Yacht and Powercraft Design course in Southampton, graduating in 1998.

During this time he was also involved in various IMS race boats. 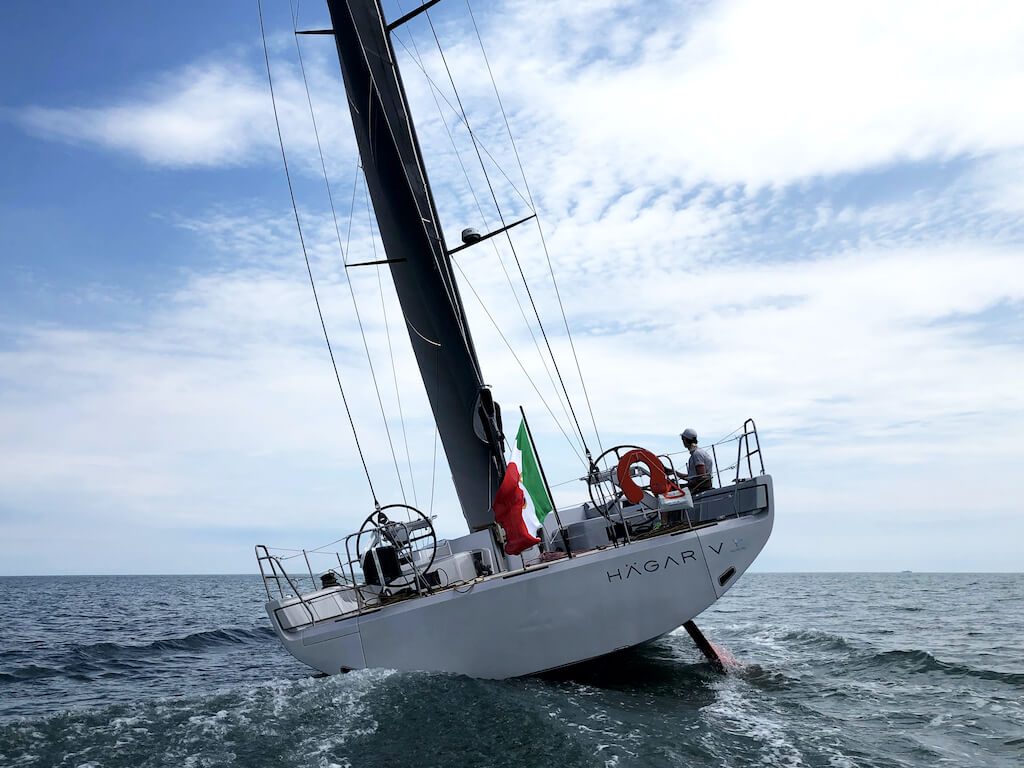